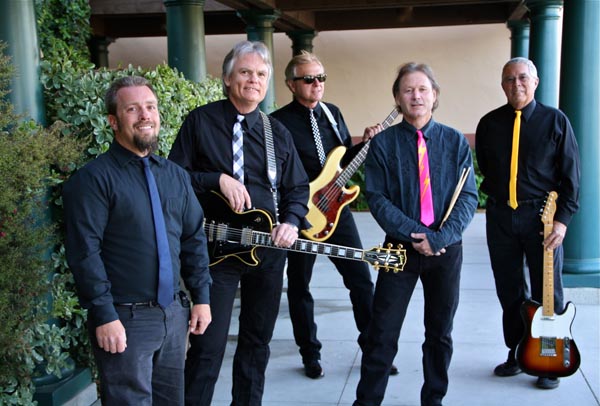 – The Arroyo Grande Village Summer Concert Series continues on Sunday, July 19, with 60’s rock ‘n’ roll dance band Unfinished Business. The show will kick off 1 p.m. at the Rotary Bandstand in the Village of Arroyo Grande.

Activities during the day will spotlight the concert sponsor Talley Farms Fresh Harvest and the featured nonprofit focus will be on the Kiwanis Centennial Playground Project.

The concert series is known for presenting eclectic and diverse musical offerings of all the regional summer series. A raffle, food, drinks and free tours of historical buildings in Heritage Square Park are also available.

This free series is presented by the Arroyo Grande Village Improvement Association and the City of Arroyo Grande Recreation Services Department. Rabobank again joins these organizations as the featured series sponsor. The concert series and the bandstand will each be celebrating their 10th anniversaries.

Unfinished Business is a Central Coast based band formed in 2003 and specializing in  1960s rock ‘n’ roll. The original members of Unfinished Business –David Hollister on drums, Jim Witt on bass and vocals, Ben Davis on rhythm guitar and vocals, and Ed Miller on lead guitar and vocals– all played in different local bands in California during the ’60s, but they eventually set their music careers aside to pursue “real jobs” and raise families.

The ’60s are now long gone, but the members of Unfinished Business still have a passion for the music of that era and their “unfinished business” is to pick up where they all left off way back when by taking the stage again to perform that great music of the ‘60s for local audiences. Unfinished Business has been named “Best Band” in 2014 by the readers of the Santa Maria Sun.

The featured nonprofit focus at this show will be on the Kiwanis Centennial Playground Project. The Arroyo Grande Valley Kiwanis Club is raising money to install “an all access playground” for children of all abilities at Elm Street Park. This park is the largest community park in Arroyo Grande and serves the needs of hundreds of children in the area. Its playground is in real need of new, safe, updated, ADA compliant play structures. These structures are very costly and, therefore, the club is planning to refurbish the playground in stages as the donations allow. Club members will be on hand at the show to let community members know how they can pitch in and help the club help the children.

This show’s concert sponsor is Talley Farms Fresh Harvest. Every week Talley Farms harvests, packs and delivers family produce boxes to pick up locations throughout the Central Coast such as Miner’s Ace Hardware, Farm Supply stores, Kennedy Club Fitness, Doc Burnstein’s and Wayne’s Tires. Each fresh harvest assortment includes fresh salad ingredients, dinner vegetables, and sweet tasting fruit. Plus, they include helpful recipes. Customers order on their website: TalleyFarmsFreshHarvest.com, and chose the location convenient to them. Fresh Harvest boxes presently cost $26 per box per week. Talley representatives will be on hand at the show on the 19th to greet attendees and display their fresh produce. A sample box will also be included as a raffle item.

Employees from the overall series sponsor Rabobank will be on hand at the show. Rabobank has supported the concert series since its inception in 2006 and its charming representatives greet concert attendees at every show with smiles, free waters and surprises!

These free summer concerts are held at the Rotary Bandstand in Heritage Square Park from June through September. The South County Historical Society’s all beef hot dogs, Doc Burnstein’s ice cream novelties, popcorn, drinks and more are available at the shows. Special raffles benefitting the featured nonprofit organizations and various displays will further enliven the concerts. Attendees are asked to bring lawn chairs, blankets and their friends and neighbors.

For more information, go to www.ArroyoGrandeVillage.org, call (805) 473-2250 or visit them on facebook: www.facebook.com/AGVillageConcerts.