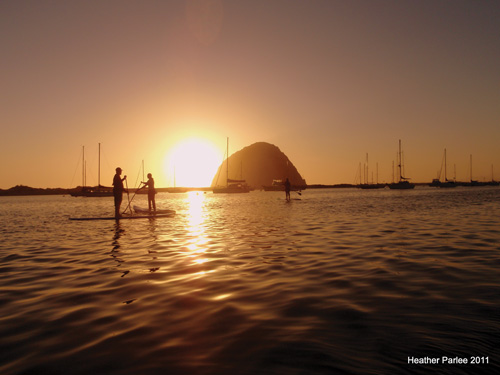 At first glance, stand up paddle boarding looks like a sport with an identity disorder. The paddling aspect certainly seems reminiscent of kayaking, but the actual vehicle is a simple, over-sized surfboard. Riders wear calm, serene expressions as if they’re going for a pleasant stroll, except that they’re walking on water. Yes, stand up paddle boarding is a lot like other activities, but there’s nothing quite like it.

Riders are equally at home on the glassy waters of harbors and lakes or surfing big waves on the open ocean. It provides a serious core work out, but at such a low impact, that there’s hardly any stress on the muscles, allowing riders to lose weight without breaking a sweat. Simply standing on the board and balancing above the undulating ocean is enough to tone leg and abdominal muscles.

Commonly abbreviated as SUP, the sport was born in Hawaii as a way for surfers to train when the swells were small. SUP has only recently been making waves on the Central Coast. In the last two years, oddball sightings of surfers standing tall with oars in hand have become commonplace as the sport gains popularity. According the Matt Hudgens, owner of Central Coast Stand Up Paddle Boarding in Morro Bay, the sudden appeal of SUP is easy to understand.
“It’s just so easy,” said Hudgens, “SUP takes something cutting edge and young (surfing) and makes it accessible to everyone.”

Hudgens said that just two out of every 100 first time riders will fall off the board and get wet. The boards are so stable that some people use them for yoga sessions in the harbor. Novice riders can be paddling the bay at ease after a quick introductory lesson. The lightweight boards are easy to push, so riders can explore water ways for hours and miles. On windy days, relatively inexperienced paddlers can take to the deep water, past the breakers where they can ride swells down the coastline at speeds of 20 mph with the wind at their backs and huge grins splitting their faces.

Another plus is that riding SUP is no grand endeavor that requires big blocks of time to enjoy. Kayakers have to load and unload a big, heavy craft that usually takes two to lift onto a truck, and surfers have to dress in wetsuits and hit the beach when the waves are breaking just right. These are two hour to half-day affairs, but SUP riders can sneak a quick 30-minute session in the water before work with ease. It’s just pull up to the bay and go.

“I had a new kid and was working all the time and not exercising,” said Hudgens. “When I found this, I was able to get out there between dropping my son off at preschool and heading to the job, and it got me right back in shape.”

For 15 years, Hudgens was a white water kayaking pro, but he said he never sits down in the water anymore. He’s hooked on SUP, and it’s easy to see why. Standing improves one’s vantage point on the water, whether that’s being in the bay and getting a glare-free glimpse of the leopard sharks, bat rays, and fish kayakers can’t see or being on the open ocean and spotting incoming swells before half-sunk surfers know what’s coming. It’s much easier to catch waves on bigger SUP boards and the fact that riders are already standing drastically reduces the learning curve, which makes for more fun and less waiting than traditional surfing.

Hudgens said those that SUP can be a great starting point for those having trouble learning how to surf and the a lot of the skills easily learned on a SUP board can translate to traditional surfing, allowing people to pick up two sports at once.

The boards are expensive, though. The cheapest, family-style soft-top sells for around $600, and the cost of a good fiberglass board hovers between $1,200 and $1,300. Racing is already becoming popular with the new sport, and professional speed boards can run up to $3,500. Hudgens advised any frugal but curious surfers to try and find any used board that can support their weight for a low price but to spend big on the paddle, which can range from $100-$350.
“The paddle makes all the difference,” he said. “You want something light and stiff, because you’ll take about 1,000 strokes per mile.”

Anyone still on the fence about trying the sport can see it in action at periodic demos that Hudgens hosts throughout the year. He also organized the 3rd Annual Waterman’s Festival in October of 2011 and plans to host the event again in 2012, though no firm dates have been set. It was a weekend of races in memory of Jesse King, a U.S. Coast Guard Honor Guard. There were 100 unique paddlers and hundreds of spectators, and the races concluded with a big barbecue bash.
It’s easy; it’s fun; and there are plenty of opportunities on the Central Coast to sample or observe this spectacular sport, so get out there!

Momemtum Paddle Sports specializes in family, adaptive, and fitness paddling. They SUP reantas and instruction.  All instructors are American Cane Association certified and there are classes of all skill levels. (805) 723-4009.

For those in the South County, Pismo Beach Surf Shop offers individual SUP tours of the Dinosaur Caves in Shell Beach, Avila Pier, or Pirates Cove for $120 or $80 each for groups of two to four riders. Their shop is located at 470 Price St. in Pismo Beach and can be reached at (805) 773-2089.