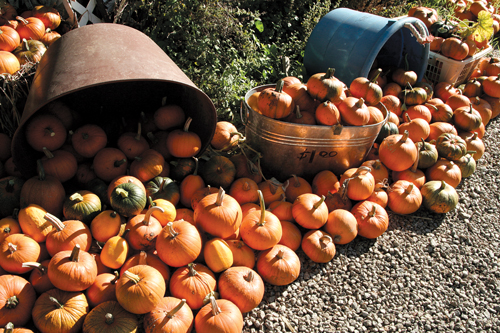 The cool winds of fall are blowing across the fields. Leaves have turned a golden hue, the corn is harvested and bright orange pumpkins are stacked by the barn. Here at Blue Sky Gardens it is time for a visit to the Haunted House or to try your luck getting through the Corn Maze. Maybe you want to buy some eggplant or visit the farm animals with the kids. This is the place to do that.

Located on a quiet country road in the Garden Farms area of Atascadero, Blue Sky Gardens offers fresh vegetables and a lot of fun. Colleen Childers, proprietor of the Gardens, grows a variety of fresh farm produce including Bell peppers, cucumbers, red beets, eggplant, zucchini, tomatoes, herbs of all kind, and corn.

As she goes about picking the ripe zucchinis that she supplies to area restaurants, she comments on the growing season. “This year, the Starlings [birds] came in huge flocks and harvested all the berries – so I took the berry plants out. The gophers tried to wipe me out by pulling down/eating 50 Heirloom tomato plants in one area. The tomatoes that I planted in a different area seem to be surviving so far.” Despite the early “harvest” by the birds and gophers, there is plenty of produce to choose from.

Spread out across the ground and loaded on the hay bales is this year’s crop of a variety of pumpkins. You can choose some for decorations and others for pie making. “We send the youngsters out into the field to pick their own pumpkin,” Childers says. The kids have a ball doing this. They ooh and ah over the 150 pound great pumpkin that Childers grew.

Then it’s on to the Corn Maze to find your way through the twists, turns, and dead ends that will get your heart racing and your blood pumping. “Every year I draw up a map for the maze,” Childers says, “then my husband John and my son go in and knock down some of the corn according to my plan.” When the kids get inside the maze, some of them pick the corn. The only rules that Childers insists upon is for children under five years old to be accompanied by a person who is at least 10 years old.

The Haunted House is also popular and Childers has made a special spot at the entrance with hay bales and hand-crafted tombstones that families can use to photograph their children in their Halloween costumes.

Kids and adults alike will enjoy seeing the chickens that scamper around in their enclosure nearby the pumpkin patch. They can also visit and feed the donkeys, pigs, and goats. Childers raises Nubian and La Mancha dairy goats that she breeds and shows at livestock events throughout the state. Many of her goats have won numerous awards. She also has cross-bred Nubian and La Mancha goats. Nubians are the goats with the large floppy ears while La Manchas almost have no ears, just a tiny flap. “Most people favor the Nubians,” Childers admits, “It’s something about the ears.”

Goat breeding season has the kids (baby goats) born in spring but every now and then there is an off-season birth. This occurred in July of this year when one of her Nubian females gave birth to a little buck. “I may foster him out for a couple of years,” Childers comments, “and then take him back when he is ready to breed.” Right now Childers has two big breeding bucks, both Nubians. There is a large black and white guy named Majestic and a somewhat smaller fellow with a lovely brown coat named Adonis, and both live up to their names. Kids are for sale starting in May and Childers offers stud service in the fall months.

Pumpkins, the Haunted House, and the Corn Maze are available from October 6 through 31. Blue Sky Gardens is at 19505 Walnut Avenue in Atascadero. For more information, including produce availability, visit blueskygardens.com or call (805) 438-5801.