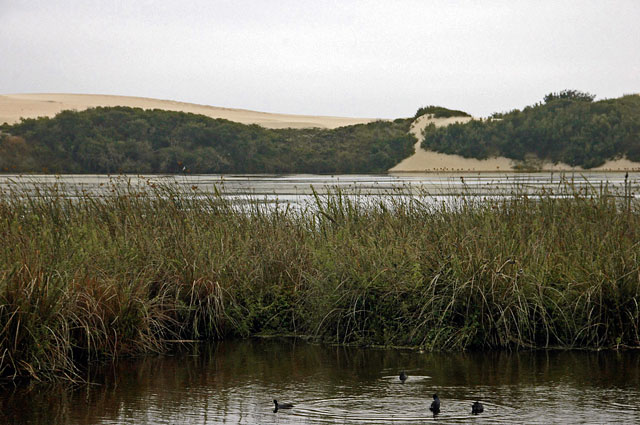 The thin, weary bear wandered through the brush and along the sand dunes, down to the edge of a lake among the dunes. He stopped and sniffed the air before lowering his head to drink. Water seemed to take away the dull pain that rode through his body. He didn’t sense the men watching him through the brush and never knew what hit him when the bullets from their guns took his life.

The men, who were from Gaspar de Portola’s expedition in 1769, were delighted with the kill although they would have preferred a little more meat on the bear. Nonetheless, they skinned it and roasted the meat over their fire as they camped by this unusual freshwater lake located so close to the ocean. “We should name this place after the bear,” one of the men said. And so they did, in Spanish, Oso Flaco.

The next morning dawned on several dead men. The Chumash, who already lived in the area, sometimes left tainted meat out for predators to reduce competition for food. The toxins passed from the bear meat to the Spaniards, killing several of the exploration party.

So goes the story of how this small but important freshwater lake got its Spanish name.

Today no more bears, skinny or otherwise, visit the lake, but it is a favorite spot for bird watchers and nature lovers. Swallows and terns flit about the tules and the railings of the boardwalk. Many species of ducks paddle about, upending themselves to feed on the lush vegetation on the bottom. Double-crested cormorants perch on driftwood in the middle of the lake and American white pelicans drift up and down while egrets and herons feed in the shallows. 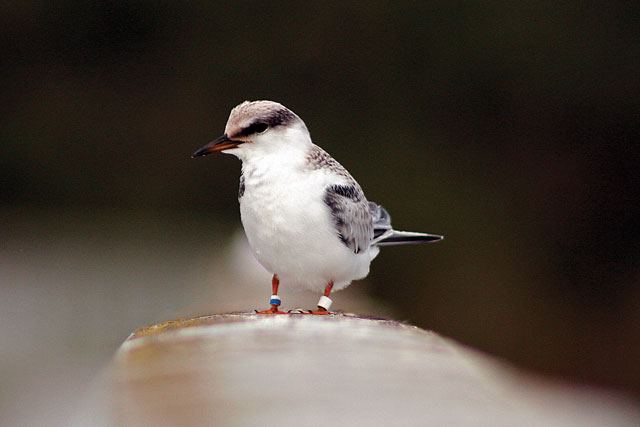 How to get to Oso Flaco Natural Area

At least one visit to this beautiful natural area is pretty much required for both locals and visitors. The Oso Flaco Natural Area is part of the Oceano Dunes State Vehicular Recreation Area and is a California State Park. To get to the site turn west onto Oso Flaco Lake Road from Highway 1. Oso Flaco Lake Road is located three miles north of Guadalupe and just south and west of Nipomo. The road dead ends and there is vehicle parking in the lot for $5.00 or you can park just outside of the lot on the side of the road for no fee and walk in.
Follow the trail across the bridge to the dunes

A white gate at the end of the parking lot marks the trailhead. Sorry, no pets allowed on the trail. The trail wanders along Oso Flaco Creek, among Spanish moss-draped willows and wax myrtles, onto a bridge that spans the lake then to a boardwalk leading into the dunes.

Wildlife of all kinds live, feed, and travel along the creek and in and around the lake. Once on the bridge over the lake, the water is fairly clear and fish, frogs, and other amphibians are often easily spotted. Keep binoculars and camera handy. There are benches along the way to rest and absorb the experience and even set up a camera for memorable shots of birds, wildlife and the scenery.

Follow the trail across the lake to the dunes. Pause for a while on the viewing platform for breathtaking, panoramic views of the entire coastline from Point San Luis to Mussel Rock.
The dunes a western snowy plover nesting site, among the lupine, coyote bush, deer weed and dunes paintbrush. The plovers share this area with a wide variety of birds, reptiles, mammals and many other kinds of plants. Be sure to follow all of the signage while exploring the dunes and the beach.
The “Lost City of Cecil B. DeMille”

The 1923 film, “The Ten Commandments,” directed by Cecil B. DeMille was filmed in the dunes. At the end of filming, the set was buried in the sand dunes. Artifacts from the set occasionally surface and are added to the collection of the film’s memorabilia housed in the Guadalupe-Nipomo Dunes Center.
Learn more

To learn more about Oso Flaco Lake, the dunes, and the filming of “The Ten Commandments,” visit the Guadalupe-Nipomo Dunes Center at 1065 Guadalupe Street, Guadalupe.