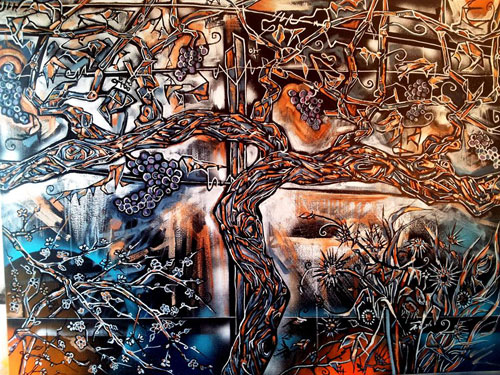 Paso Robles artist brings the vineyard into the tasting room, one vine at a time

With a promise of abundance, the lone dormant vine rests dispassionately against a frenetic background of abstract aerosol art. Unabashedly bare and seemingly motionlesss, the vine’s twisted tendrils extend their reach to form a gnarly figure within the depthless composition.

This depiction of agitated melancholy is the focus of a prolific series of vineyard portraits created by Paso Robles artist Adam Eron Welch. The largely unapologetic and sometimes inhospitable collection exposes the vine’s vulnerability and compels the viewer to reflect on the beauty of decay and impermanence.

“I wanted to take a very unique approach to portraying the vineyard,” said Welch, who began his career as a graffiti artist in New England. “My goal was to paint one single vine, from a block of one varietal, in each vineyard, to eventually map out the entire Paso Robles AVA,” he explained.

Reflecting a specific time and place in the starkest and simplest terms possible is the ambition behind Welch’s vineyard designate, vine paintings. “Light and energy is happening even in stationery objects,” said Welch. “I want my paintings to have that kinetic energy to them that catches people’s attention. That connection is my sense of success.”

Since the project’s beginning about four years ago, Welch has been an invited guest to over 40 local vineyards including Denner, Dusi and Calcareous.

In capturing the unique characteristics, scars and struggles of individual vines, the artist employs a rebellious mixture of oil and water-based paints, enamel, spray paint, graphite and charcoal. “Sometimes I’ll dump coffee in there, spit wine at it – I mix everything together,” Welch said, adding that he’s currently working with different polyurethanes and screen-printing.

The challenge for Welch is to be constantly evolving within his process and technique, “so every painting is completely unique.”  For that reason, he doesn’t sell reproductions or prints of his work.

As a skater punk, Welch’s formative years were spent spray painting the Red Line at Boston’s South Station and running from the cops. While this honed his ability to paint quickly, he realized street graffiti was a limited, if not illegal, art form.

Welch left his New England home in 1999 and began a decades-long journey, traveling continuously around the planet, living in 30 countries on six continents. “I hitch-hiked across the Middle East, went through Sub-Saharan and West Africa and through the Andes in South America,” he said, all with the intention of finding the perfect place to live.

After spending a night on a friend’s couch in Paso Robles, Welch awoke to the feeling that “this is it.” Resolved to calling the area home, he quickly dropped out of grad school, sold his house and car, broke up with his girlfriend, and said, “I’m not going anywhere.” He hasn’t left since.

“Paso is magical – the most beautiful place on Earth,” Welch enthused. He fell in love with the landscape, particularly the vineyards, and took employment working in the cellars and tasting rooms of local wineries.

Welch soon discerned that tasting room guests were often divorced from the vineyard and the winemaking process in general. While some knew a great deal, the majority had questions. “So, the idea was to bring the vineyard into the tasting room through my art,” he said.

“I think a lot of people who work in wine have had their ‘ah-ha’ moment,” said Welch. “There’s that one time where you get to have a sip of an exceptional wine and things are happening in your mouth that you’re not used to – you’re tasting the soil and the sunlight, the toils of the farmer, the drought that happened that year, you’re tasting everything that went into that. So that was my goal: to capture that in a painting.”

Welch’s collection of vineyard designate, vine paintings can be viewed in the tasting rooms of Cypher Winery and Brian Benson Cellars. For more information on Adam Eron Welch and his paintings, follow his blog: adamwelchartist.blogspot.com.