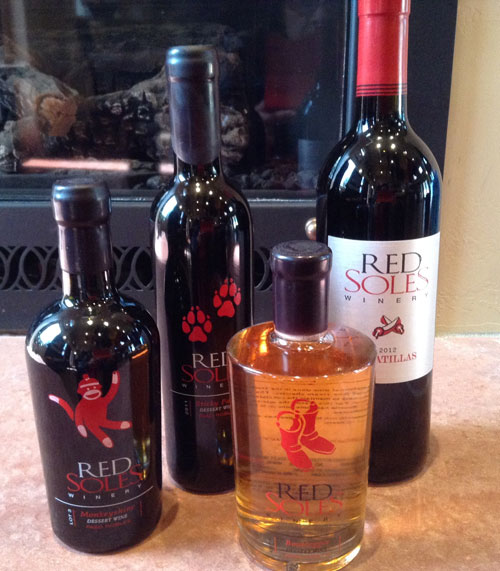 When long-time growers Randy and Cheryl Phillips decided it was time to showcase their wine grapes, they crushed Zinfandel in a barrel, stepped out with their grape-stained, red-soled feet and, voila, Red Soles was launched in 2004.

“We had picked some Zinfandel and Petite Sirah,” Randy recalled. “We hand-crushed and de-stemmed the fruit, decided to stomp with our feet and called the first vintage Kick-Off.”

Production expands through the years

The initial 2004 vintage production was a mere 25 cases. “We had no idea we’d start our own winery,” he said. The initial idea was to showcase their vineyards’ fruit, something the family was unable to do when the grapes – sold to other wineries – played a supporting role in multiple blends.

Yet the following year production grew to 600 cases. Current annual production ranges between 2,500-2,800 cases, sold only through wine club and the tasting room.

“We want to cap it at this level,” said the satisfied vintner, who has also started dabbling into brandy production. A gleaming new distillery unit stands proudly in the tasting room. Joining the wine portfolio are bottlings of California Hootch, an un-aged brandy, along with limoncello labeled 40 Days and 40 Nights.

In 1987, the Phillips started with an old-vine Chardonnay vineyard originally planted in San Miguel in the mid-1970s. “We’ve had 25-30 gold medals for this Chardonnay,” Randy noted. As growers, the family sells their prized fruit to such well-known wineries as Eberle, Castoro and Peachy Canyon.

In 1991, the family purchased its Westside vineyard on Oakdale Road off Highway 46 West; since then they have established long-term relationships as suppliers to noted brands such as Kendall Jackson and Constellation. Of an entire harvest, some 2,000 tons of grapes are sold with about 30 tons set aside for Red Soles.

A total of 250 acres are under vine, 150 acres in San Miguel and 100 acres in the Templeton Gap. The Mediterranean-style tasting room and production facility, a former barn, is surrounded by plantings of Syrah, Viognier, several clones of Cabernet Sauvignon, two clones of Zinfandel and new plantings of head trained Chardonnay and Petite Sirah. A section of Spanish varietals has been added — Tempranillo, Granacha and Mataro, also known as Spanish Mourvedre, which go into the Zapatillas blend.

Phillips practices a holistic approach to farming. “We use no poison, trap our gophers and plant barley in between vine rows.” Instead of netting and shotguns, Phillips uses electronic bird control.

The tasting range is quite extensive including fortified dessert-style wines such as Stiletto (Viognier) and Sticky Paws (Zinfandel). The 2012 white old-vine Estate Chardonnay is laced with Asian pear notes and balanced acidity. The 2013 vintage tastings include Heart & Soul, a crisp blend of Chardonnay and Viognier; a barrel-aged Viognier fragrant with grapefruit aroma, and Loose Laces Rosé, a refreshing blend of Syrah, Grenache and Viognier – all are ideal as poolside summer wines. All the white wines are fermented using native yeast.

Noted for its Zinfandel, Cabernet Sauvignon and Tempranillo, Red Soles has racked up barrels full of accolades. The 2011 Tempranillo won the award as the best Tempranillo of California at the State Fair and one of the top 25 wines in California.

The Syrah vineyard has a row of Viognier planted at the edge. The two varietals are picked together and co-crushed and co-blended. The 2011 Estate Syrah is blended with 5 percent Viognier and shows bold red fruit and a deep plum color. The 2012 Barrel Select Syrah, aged in 100 percent American oak, exudes notes of orange peel. The inky-colored 2012 Estate Petite Sirah is rich with blueberry notes and integrated tannins. Lush in the mouth, Achilles Weakness is a 2011 blend of Syrah and Petite Sirah.

Phillips noted there are 55 acres planted of this Cabernet in five different clones. “Clone 15 has small berries, intense color and fruit flavor. Most of this Cabernet goes to Wild Horse for its Unbridled Reserve program.”

As for ageability of Red Soles wines, Phillips said: “Syrah – try to drink it within eight years; Zinfandel, not more than five, and our Cabernet – lay it down for 10 to 15 years.” But then again he adds, “If you like it now, drink it now. There’s more where it came from.”