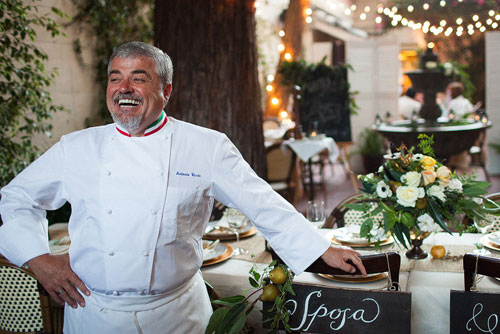 A taste of true Italian joy

Biting into fresh, home-made tortelloni stuffed with pumpkin and ricotta cheese and topped with sage, mascarpone sauce and walnuts, is joy enough on its own. Pairing that flavorful experience with the picturesque al fresco environment at Buona Tavola, strung with lights and set with ironed, white tablecloths, takes it to another level. And when Chef-Owner Antonio Varias tells his story, emitting his mesmerizing, full-bodied and loosely flowing Italian accent, everything—the rich, delicious food, the superb service, the tucked away little corner restaurant ambiance—mingles together with his voice to create that beautiful, one-of-a-kind warmth and bliss that epitomizes Italian culture.

In his affable, mellifluous way, Varias describes how he came from the mountainous lake region of Piemonte in northern Italy to California over 27 years ago, fulfilling a lifelong dream. He had grown up as his family’s designated cook—his mother having been ill—and had enjoyed the work  so much that his father helped him take the next step to become a chef at various hotels in his area.

“I really enjoyed it, but my dream was always to come to the United States,” Varias says. In the ’80s, he took the helm of a Princess Cruise ship’s floating kitchen, landing eventually in Los Angeles, where he began working for a well-known chef in Beverly Hills named Antonio Tomasi. Four years later, Varias and his wife decided to move to San Luis Obispo, a town they had visited over the years and liked. They bought a ranch and, in 1992, opened their first restaurant, Buona Tavola.

“Buona Tavola is a name meaning ‘good table,’” Varias translates—but the true meaning of the Italian phrase is not so simple. At Thanksgiving or Christmas dinners, with all of your family around you, he explains, “Usually, before you say grace in Italy, you say, ‘Ah, che bella tavola!’ or ‘Che buona tavola!’—What a good table, full of friends, family and good food!” It is this sense of happiness and love that he wanted to convey with the name, and which he hopes to express by cooking food he not only loves to make, but loves to eat.

Understandably, his specialty is Northern Italian cuisine, which he explains has a lot of influence from Germany, Sweden and France. “It’s more ‘white,’” he says, referring to the creamy white sauces used in the  pasta and gnocchi dishes of the region, which rely heavily on cream, cheese and butter, as opposed to the spicier, olive-oil-laden, tomato and eggplant dishes of southern Italy.

In addition to the traditional gnocchi, which they make fresh every day, and the classic Piemonte pappardelle (wide ribbon pasta), and agnolotti (half-moon shaped ravioli) dishes, Varias also includes other styles of Italian cooking like the Timballo Valdostano, which is similar to southern eggplant parmigiano.

As he talks of his large family and his hometown in Italy, there is a twinge of nostalgia in his words.

“I would not change my life for anything else. I’ve been traveling lately in the United States, and no other place is better than San Luis Obispo, I tell you!” he says, with that matchless wide, warm Italian smile. “I’ve really been blessed, Signorina. I do what I love to do: cooking!”