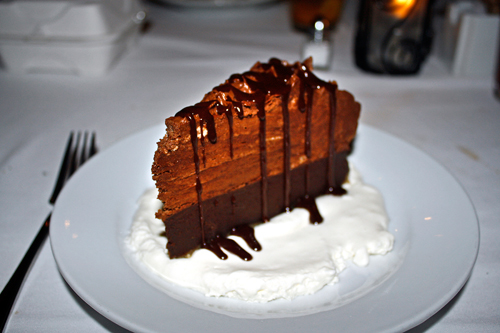 Chocolate truffle cake is just one of many decadent dessert choices.

The wine shop that once was named Cambria Wine Shop has been a staple wine tasting spot for the past 20 years. About 10 years ago an adventurous chef named David Stoothoff came along and joined forces with the shop, opening Madeline’s Restaurant. Three years ago David bought out the wine shop and became sole owner of both establishments.

Of course diners can enjoy any of the wine selections with their meals but it isn’t just the wines that set this eatery apart from all the rest. It’s the menu. One glance tells you dining here will be a new adventure. Some of the choices include Lapin Avec Prunes (yes, that’s rabbit), and Louisiana Gumbo, Long Island Duck, local lamb, and the epitome of choices, Wild Boar Chops!

David obtained a degree in English and never went to cooking school. He has worked in many restaurants including ones in Vermont, Arizona, and Chicago honing his culinary skills. “My grandfather,” he said, “who lived to be 99, said I have ‘an empirical degree from the culinary school of paradigm.’ Or in other words, from the school of hard knocks.”

From the appetizers through the desserts, everything is made in David’s kitchen from his recipes, and while in times past he spent most of his time in the kitchen he now enjoys a happy collaboration with his sous chef. “I am fortunate in having an excellent partner in Miguel Gonzales who cooks like I do,” he said. Both cooks bring their special expertise to the table.

The restaurant is named after David’s daughter. “Madeline is the oldest of four girls,” he said, “but I am not planning on opening three other restaurants!” Madeline is currently attending college in San Diego but she did her time at the restaurant working as a bus girl. “My daughter Juliana is 15 and is now being trained in the kitchen,” David commented, “and soon I will train her out front.”

David likes to offer elegant and unusual dishes, thus the wild boar and rabbit. He obtains a rack of boar from a ranch in Nevada. Boar doesn’t taste like pork. It is more akin to beef in flavor and is dense in texture, not quite as tender as lamb. “I put rabbit on the menu six or seven years ago and no one bought it,” David said. It’s popular now and he thinks it might be thanks to the proliferation of cooking shows on TV.

“I use local produce,” he said, “and change the menu based on what seasonal vegetables are available.” The entire menu is changed four times a year. David gets lamb from Tepeyac Farm in Creston, and other menu items from the Abalone Farm, Charon Springs Farm, Linn’s Farm, Bounty of the Valley, and McCall Farms.

David currently cooks on weekends and is out front in the restaurant Tuesday through Thursday. “This gives me a chance to talk to the diners and answer any questions they might have,” he said. It also affords him the chance to watch the expressions on people’s faces. “I can see their reactions to the food,” he said, “and that gives me valuable feedback.” David willingly shares his recipes with anyone who asks. “After all,” he said, “that’s part of the way I learned to cook too.”

Diner Mary Leizear from Morro Bay had this to say about her meal, “The duck was exquisite and perfectly cooked, just slightly pink.  The cherry and brandy reduction sauce was the perfect complement.  The presentation, ambiance and service were just delightful.  And that decadent chocolate truffle cake was a true gourmand-ending to a superb meal.”

“This is fun for me,” David commented, “I work an average 60 hours a week, but I’m fortunate. A lot of people only work a 40 hour week and wake up in the mornings and hate their job. I wake up and I love it!” There must be something to this because if you come to dine at Madeline’s Restaurant you will find that the love comes through in the food.

David also does catering, wedding receptions, barbecues, luncheons, and private parties – each customized to a client’s particular needs for any occasion and any budget.

There are more than 80 wines in Madeline’s Wine Shop including selections from France, Italy, Spain, South America, Napa, Sonoma, and the Central Coast. The nice thing about tasting at Madeline’s is you can cater your choices. Perhaps you want to sample only sparkling wines or only white, or only European; you can do that here whereas at a winery you can only taste whatever varietals they produce. Many people come back to Madeline’s Wine Shop again and again for just that reason. Dennis, the wine buyer, tastes wines every day to assure that the wineries represented are the very best. Big Red Wine Club members receive six bottles of hard to find reds of the Central Coast and countries around the world four times a year in addition to purchase discounts and other benefits.