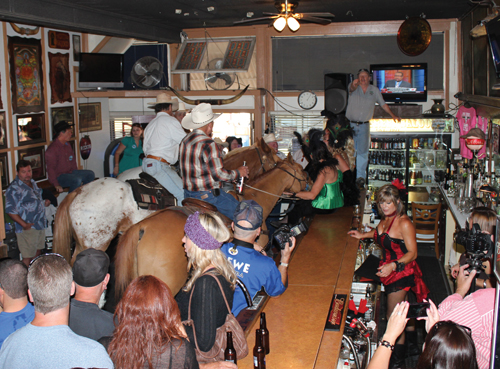 A country bar with charm and character

Before Toby Keith and Willie Nelson recorded “Beer For My Horses” the Pine Street Saloon was serving whisky for the men and beer for the horses on Pioneer Day in Paso Robles for 30 something years. This Saloon is housed in one of Paso Robles’ oldest buildings (cir 1857) and, as rumor has it and story tells it, has a colorful history. That history includes names like Jesse James, being a bordello, being owned at one time by the Blackburn family, who are founders of the town, along with names such as James Drury, Jesse and Frank James Uncle.

Regarding the horses coming in the Saloon owner Ron French said, “People get a real kick out of it (hopefully not from a horse), and how often do you get to have a beer with a horse?” Ron and his mom, Pat French, own the establishment on Pine Street. During the 1880s there were over a dozen saloons and bars between 13th and 10th streets and there were Saturday night dances and horse races as well. 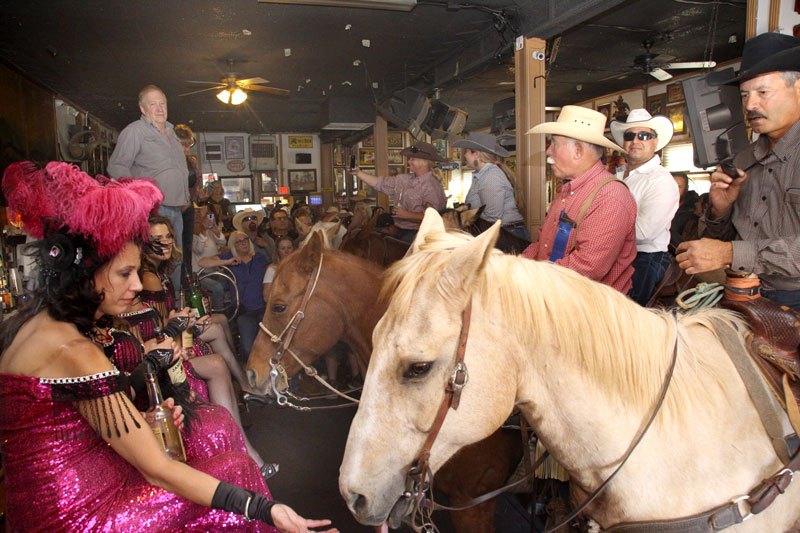 “We go out of our way to take care of customers,” said French. A few years ago, the saloon acquired its own limousine, which French uses to pick up and deliver a Safe Ride to customers when they don’t have a sober driver on hand. Because he wants everyone to enjoy a safe night on the town, he’ll take you anywhere within city limits, and all for free – though that kind of service warrants a generous tip to the limo driver!

“It’s really popular with folks staying at the hotels,” said French. “If you don’t have a designated driver and can’t afford a cab, we want to make sure you don’t do anything that’s going to get someone hurt.” As a matter of fact, French gave actor Gary Busey a ride back to Hollywood in the limo, like Limo Find – check out the picture at the Saloon. But even free limo rides don’t reach the extent of the bar’s helpful hospitality; Ron helps some find a room where they can sleep it off.

But beware. The Saloon is rumored to be haunted and was even the subject of an episode of the Travel Channel’s hit show, The Dead Files.

“I don’t really believe in ghosts or any of that,” said French. “It’s an old wooden building with creaky noises.” Many guests tell us stories of noises, pans falling in the kitchen, and things moving. Out of curiosity, French set up night-vision cameras in the hall corridor and has video footage of what he calls “supercharged dust particles” that appear to glow, travel through glass, and zip around the room even when the air is still. And there are the videos of lamps and an old vacuum cleaner moving across the floor late at night.
French said that he was able to provide 25 people to speak with the producers who have had ghostly experiences within the bar, as well as some footage caught on his night-vision cameras.

The premise of Dead Files is that a retired homicide detective and a medium, “combine their sixth senses to investigate haunted locations where a deadly crime was committed.” Steve DiSchiavi is a retired detective with more than 20 years of experience with the New York City Police Department, and Amy Allan is a paranormal researcher and psychic who has worked with many private investigators and police agencies. In each episode, the duo investigates a case independently and keep their findings hidden from each other to preserve the integrity of their discoveries. At the episode’s end, DiSchiavi and Allan share with the property owner what they discover.

During the day, the Pine Street Saloon is a quiet place to relax and visit with neighbors and friends, but it’s a bit different at night. There’s always something fun happening, and the nighttime activities are guaranteed to draw a crowd, with Sunday’s Karaoke, Monday’s Open Mic, Tuesday’s Karaoke, Wednesday’s Open Band Night, the Thursday North County Line Series, Friday night Karaoke and live bands on Saturday. 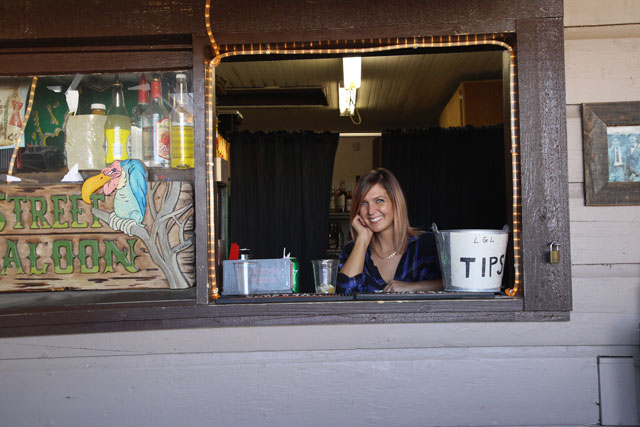 A friendly bartender is always ready to help at the saloon.

There’s little about the bar that could be called “refined,” and there are no fancy frills. The jukebox plays both kinds of music: country and western. The decorations consist of historic signs and pictures, animal heads and old concert flyers. Thursday, Friday and Saturday nights there is a food trailer in the backyard with some very fine food. It’s a cash-only establishment, but they do have an ATM inside for those that only brought their credit cards.

“We can make those foo-foo drinks, but they’re not very popular around here,” said French. “Our specialties are beer or Jack and Coke, nice and simple…It ain’t a wine bar, that’s for sure.” And you can shoot a game of pool, or hang in the new backyard till the cows come home.

The simple, no-nonsense formula of cold beer and good service has worked at Pine Street Saloon for 40 years. It’s a family operation that started in 1971 under Pat French. For most of its run, the business was in the building next door to its current location, but the family always had their eye on the old brothel as a perfect drink house. They moved the business in 2002 just in time for the big earthquake that damaged several buildings in the area, including the brick building that had housed the bar. It was torn down, and but the new location suffered nothing more than a slight tilt. If you look carefully at the front entrance, you can see that the wooden building leans a little to the right.

After the move, Pat handed the reins to Ron, but she still gets behind the bar to serve drinks every now and again. Ron’s son works in the bar as well, making it a third-generation business. “Mom started it. I’m keeping it going, and Danny’s keeping it stocked with beer and spirits,” said French.

Click here for a little more history of the Pine Street Saloon.

Whether you’re a homegrown local or a weary traveler, point your horse toward 1234 Pine Street in the historic downtown district of Paso Robles and visit the Pine Street Saloon. For more information call (805) 238-1114 and ask for Ron, or visit the website at PineStreetSaloon.com.