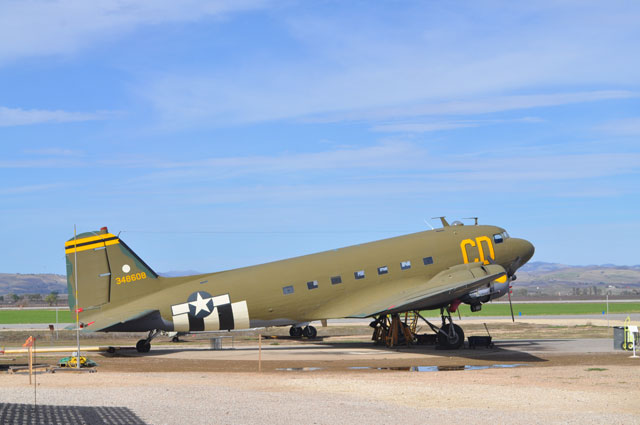 Fly on Betsy’s Biscuit Bomber and see some of the rarest airplanes, vehicles and military collections in the United States

The Estrella Warbirds Museum is the home of the Gooney Bird Group and their C-47B, Betsy’s Biscuit Bomber. Betsy took a historical flight and joined the largest fleet of C-47s since World War II, joining her comrades in Normandy for the 75th international anniversary of D-Day. For the second time in her career, Betsy crossed the Atlantic, flying 13,000 miles, 130 hours and over two continents. The 2019 summer anniversary of D-Day was the largest commemoration of a tragic period in world history and an occasion to celebrate peace, liberty and reconciliation.

Betsy’s Biscuit Bomber was restored by the Estrella Warbird Museum’s restoration crew and returned to flight status on August 1, 2009. Before being recovered from Canada where she had been sitting for six years, Betsy saw service with the United States Air Force, Belgium, French and Israeli Air forces. Prior to being flown home by the museum crew, Betsy had a total of 9,420 flight hours.

Fly with Us on Betsy’s Biscuit Bomber

The museum is accepting donations for a seat on a once-a-month flight onboard Betsy’s Biscuit Bomber. The donation to the museum is $150 per person and must be purchased in advance. Flights are on the third Saturday of the month. Take the flight of a lifetime and make your reservation on the Estrella Warbird website (ewarbirds.org).

Betsy’s Biscuit Bomber is only one of the many historical airplanes on display at the Estrella Warbird Museum. The displays include restored aircraft from the 1940s through the 1990s, a growing collection of armaments and ordnance, restored military vehicles, and a full-size F/A-18 cockpit simulator that was actually used for pilot training, a fully equipped old Indy car garage, the WWII Red Ball Express Motor Pool, and the 19,700, square-foot Woodland Auto Display, that includes historic NASCAR cars, a Steve McQueen Indian motorcycle with a side car, along with an always-changing assortment of street rods, and antique and classic vehicles.

The Estrella Warbirds Museum, along with the Woodland Auto Display, is one of the fastest-growing nonprofit museums in Central California and a “must-visit” for airplane, vehicle, and military memorabilia fans. Bring the family and plan on spending most of the day.  The grounds and buildings cover more than 10 acres!

Estrella Warbirds Museum is a 501 (c) 3 nonprofit, dedicated to restoring and preserving military aircraft, vehicles and memorabilia and to honoring those who flew, drove and worked on them and helping future generations understand that the American way of life does not come without sacrifice.