– The 34th Annual Morro Bay Harbor Festival taking place the first weekend in October is planned to be a fun-filled weekend of activities to celebrate “All Things Bay.” This year’s festival will have a whole new look, location and “back to the basics” appeal.

The main event will take place all day on the pedestrian event zone on Saturday, October 3, from noon to 9 p.m. on the Embarcadero between Harbor and Marina Streets. Admission to the one day festival is free.

Festival-goers will be able to purchase the freshest seafood from local fishermen at a variety of locations along the Embarcadero including oysters, shrimp, barbecued albacore, and rock crab right from the dock. There will also be maritime-heritage venues, mini yacht races, water-craft demonstrations and harbor boat tours in the bay. Local wine and beer will be available at the festival along with a variety of other food, all from local vendors. 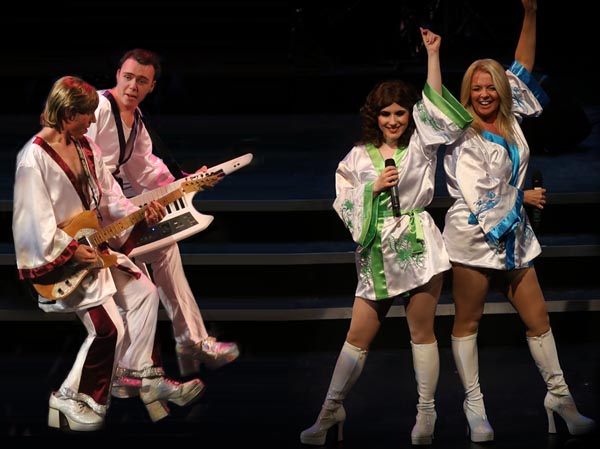 The headliner band for the festival, AbbaFab.

Throughout the day, the Festival will feature music from three local bands. They are Deep Blue, Shameless and Hot Tina. Then at 7:15 p.m., the headliner band, Abba Fab will perform just prior to the new big feature of the Harbor Festival this year – a fireworks display over the harbor next to Morro Rock.

Local Morro Bay businesses and vendors will be presenting and selling their wares at the Harbor Festival. Additionally, ocean-related agencies will provide information about local resources. Festival favorites such as the hawaiian shirt contest and oyster eating contest will also be held that day.

A major ancillary activity this year at Morro Bay Harbor Festival will be a kick-off golf tournament on Friday, October 2 hosted by and held at the Morro Bay Golf Course. The tournament will have a shot-gun start at 8:30 a.m. The format of the tourney will be a four-person scramble which includes golf cart, green fees, a variety of tee prizes and lunch for the entry fee of $75. Contact (805) 772-1923 for further details.

Spearheaded by the Morro Bay Harbor Festival organization, the 34th continuous year will bring locals and visitors to the city to enjoy “All Things Bay” in this spectacular setting. This redesign of the Harbor Festival is a partnership between many organizations including the City of Morro Bay, the Commercial Fishermen Association, and the business community.

As is the tradition with the Morro Bay Harbor Festival, a portion of the net proceeds will go to a Morro Bay non-profit organization. This year, the selected organization will be the Central Coast Maritime Museum.