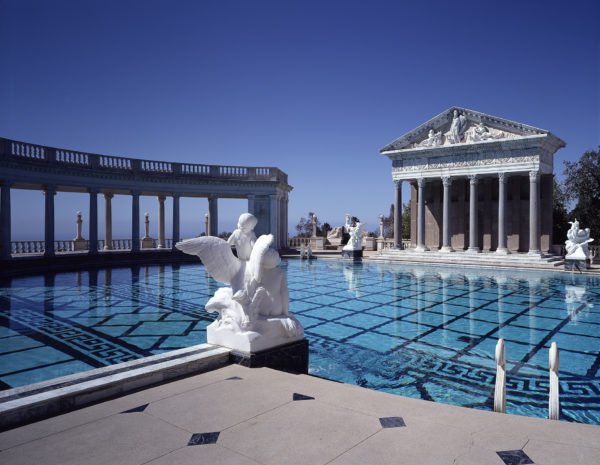 –California State Parks announced that the project to repair and restore the world-famous Neptune Pool at Hearst Castle moved into the final phase. The department began refilling the 345,000-gallon pool Tuesday.

The historic castle, built between 1919 and 1947 by William Randolph Hearst and architect Julia Morgan, includes a 115-room main house plus guesthouses, pools, gardens and a world-renowned collection of art. Donated by the Hearst Corporation to the State of California in 1958, the castle attracts on average 750,000 visitors a year.

The nearly 90-year-old Neptune Pool was drained in 2014 at the height of the drought due to cracks that caused it to leak up to 5,000 gallons a day. State Parks immediately launched a major renovation project to fix the leaks. Design work for the pool, including historical surveys, permitting, and environmental reviews, was completed by the end of 2015 and the construction contract was awarded in 2016. To help Hearst Castle better prepare for droughts, the department also looked at other ways to improve water-use efficiency and upgraded the irrigation system, replaced thirsty plants with drought-tolerant varieties and added mulch.

“We are pleased that visitors can again enjoy the artistry of the Neptune Pool,” District Superintendent Dan Falat said. “More importantly, this fully restored structure and other improvements ensure that water is being used efficiently and wisely for the long term.”

The project was funded by Proposition 84 (passed in 2006) and the State Parks and Recreation Fund.