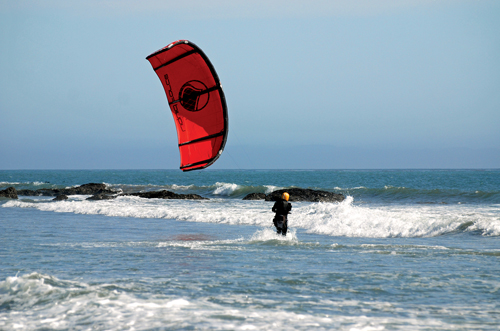 When the wind is up on the Central Coast, a dedicated group of individuals break out an interesting combination of equipment, go down to the ocean, and take flight.

In the last three decades surfing has grown from skipping across the waves on boards both long and short, to riding them hanging on huge sails, to flying over them with kites.

Kitesurfing, or kiteboarding, as its often called, is an extreme sport.

Barbara Engel, an athlete from Morro Bay, says “a person should definitely take lessons before taking up the challenge.” Engel started kiteboarding after years of regular surfing and windsurfing. “It was something new and different from windsurfing,” she said, “and the equipment is smaller and lighter than windsurfing equipment.”

Kiteboarding relies on wind power to pull the surfer through the water. Kite power is not new. Even as far back as the 13th century the Chinese were employing ways to use kites to propel themselves across land. Kites have been attached to carts and to ships. During the 1980s kayaking became the second most popular water sport and it wasn’t long before someone thought about attaching a kite to use as a sail.

But real kiteboarding came to life both in the USA, when Corey Roeseler made the Kite Ski, using a kite with water skis, and in France with the Legaignoux brothers Wipika style kite design. In the late 90s kiteboarding was popular in Hawaii and by 1998 the first kiteboarding competition was held on Maui.

“The good thing about this sport,” Engel said, “is that you don’t necessarily have to be a good surfer.” But there are special techniques and safety tactics that need to be employed.

Kiteboarding schools teach students how to launch the kite, how to fly and land, usage of the bar, and what procedures to follow if they get in trouble.

“In the early days there was no way to release yourself from the kite if things got bad,” Engel said, “but in the last five years manufacturers have built in safety release mechanisms.” Engel always carries a knife with her just in case.

Things to learn are how to turn, how to fly, and the very advanced maneuver of grabbing the board. Engel said there are local guys who can do all of these things, but she doesn’t take the sport to those extremes.

Type of kites and kite sizes make a difference in the ride as well as types of boards. In the beginning wakeboards were used with kites where the person was towed behind a boat. This is still part of the sport.

Naturally wind is the most important component. “The best wind is coming from either the northwest or the north,” Engel said. Down in Pismo the winds are often onshore, and while that’s a challenge for the rider to make sure they don’t get driven up on shore, Engel says it is doable. “You never want to kitesurf when the wind is offshore,” Engel said, “or you could get blown out to sea.” It’s also a good idea to go kitesurfing with a buddy.

There are leading edge inflatable kites referred to as inflatables or C-kites, and bow kites and each enables the rider to do different things. A C-kite might lift one into the air about 30 feet whereas a flat bow kite will keep the person riding the waves with about a 15 foot lift.

The other elements involved in kiteboarding are the lines that attach the rider to the kite, the control bar that attaches to the kite via the lines, a kite harness that has leg loops or can be a waist or vest type, and of course the kiteboard made of wood or foam.

Now there are directional surf style boards, wakeboard style, and some that can go in either direction. Some kitesurfers use their regular surfboards or longboards.

Local hot spots for kiteboarding are Arroyo Laguna off Highway 1 near the elephant seal rookery, north point in Morro Bay, and Pismo Beach for ocean kiteboarding. Lopez Lake is another favorite.

Local Jason Lee, who has taught kiteboarding for some years, opened California Kiteboarding at Grand and 6th Street in Grover Beach. This is a welcome addition to the many fine regular surf shops on the Central Coast.

Lee will offers classes through the store. “You can’t just come here and rent equipment and go kitesurfing,” Engel said, “You have to have lessons.” So Engel and her kitesurfing friends are thrilled to have Lee’s new establishment here.

With this new resource and the favorable winds of the area, it’s a sure bet that kiteboarding is a sport that will grow here on the Central Coast.