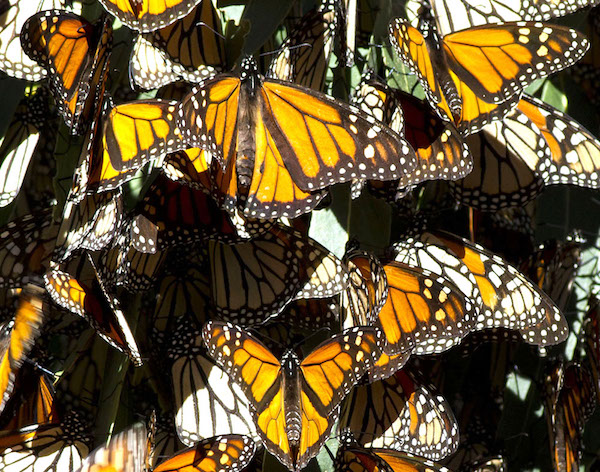 —From late October to February the Western Monarch Butterfly overwinters along the California coast and the Pismo Beach Monarch Butterfly Grove is one of the five overwintering sites. In recent years declines in the population of the vibrant orange and black butterfly has concerned scientists, but this year, 2021, the Pismo Beach grove reports over 22,000 butterflies are filling the trees and that count may increase when the official population count gets underway.

The declining monarch butterfly population has been a concern for scientists and butterfly enthusiasts since 2014 when a dramatic decline was observed in butterflies hibernating in Mexico. Scientists attribute the decline to the disappearance of the monarch milkweed plant, the only plant the monarch caterpillar will eat. Statewide 1995 butterflies were counted in January 2020, a chilling drop from the millions of Monarchs that used to overwinter at the various California sites.

The Xerxes Society, which conducts an annual Monarch butterfly count between Thanksgiving and early December, estimates that the 2021 count will be over 50,000. The reports donít consider this growing population as a recovery but it is an encouraging increase.

The best spots to see and learn more about the Monarch butterfly on the Central Coast are the Pismo Beach Butterfly Grove and the grove at Morro Bay State Park.
Visitors to the grove at Pismo State Beach, located on State Highway 1, are be greeted by knowledgeable and well-informed volunteer docents offering talks and information about the butterflies visiting the grove. Call the Chamber of Commerce at (805) 773-4382 for more information.

Visitors can also see the butterflies at the Morro Bay State Park.

The Morro Bay Museum of Natural History, located at 20 State Park Rd in Morro Bay, is an excellent resource for information about Monarchs. Call (805) 772-2694 for more information.