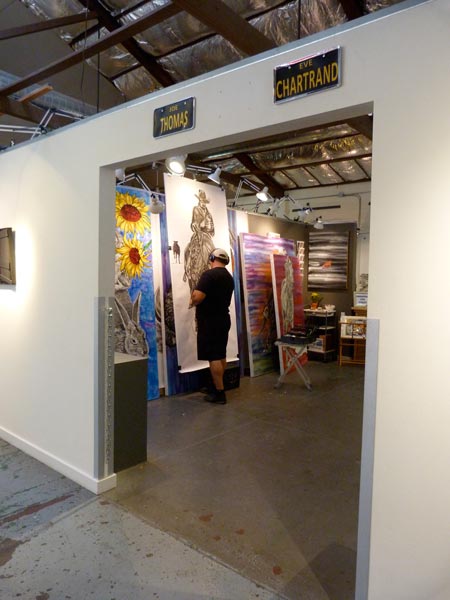 Since its opening in 2009 Studios on the Park has grown to become not only a space for artists to work and exhibit, but a location for classes, demonstrations and lectures designed to engage both locals and visitors to the area. Programs Director Sasha Irving says, “The community loves the arts.”

This automotive history of the building is evident – the entrance is home to the front end of a 1950s Hudson Hornet and an antique gas pump, and the sign and logo are styled to reflect Studios on the Park’s inherited history.

Sasha reflects that just like Paso Robles in its heyday as a friendly place for travelers to stop along their journey, Studios on the Park is designed to be a very welcoming place. She says that they receive a lot of drop-in traffic from visitors exploring downtown Paso Robles.

The building has been redesigned to house the many components that make up Studios on the Park. The space still feels industrial, and much of the original building is showcased in the interior, including the original redwood beams of the roof. The space holds a main exhibition space, called the atrium, which has a new exhibit each month. Studios on the Park welcomes the public on the first Saturday of each month from 6 – 9pm to celebrate each new show. These first Saturday openings have wine and live music, and have been well received by locals as well as out-of-town visitors to Studios on the Park.

See artists at work at Studios on the Park

The artists’ studios serve both as work and exhibition spaces. A visitor can expect a chance to watch an artist at work, and to be welcomed into a discussion of their work. Sasha describes the artists of Studios on the Park as “artistic ambassadors” to the community. And of course Studios on the Park is a great place to purchase local artwork. Sasha emphasizes that art can be found at a range of prices.

Studios on the Park has workrooms for the many classes it offers, and is home to the Paso Robles Art Association, a group of over 400 artists. Studios on the Park also has a fundraising store, with a collection of handmade items from primarily local artists; the store sells wood carvings, wearable textiles, children’s gifts, ceramics, bags and jewelry.

One of the biggest components of the community involvement is Kids Art Smart, which makes art classes at Studios on the Park available to local schoolchildren. Since it began in 2011 Kids Art Smart has been putting on classes for children from the local schools, from kindergarten through fifth grade. Sasha says that the children come to Studios on the Park for a “fully immersive art experience with a professional artist.”

At the end of each semester the classes put on an exhibition of their work, to which their families are invited. This expands the involvement of the community with the arts in that the parents can see what is happening at Studios on the Park, as well as what is inspiring their children. Sasha notes that for some families this can be the moment when they realize that their child is passionate about art.

The program is funded by grants and private donations, and the children participate in the classes—which range from painting to woodcutting and beyond—free of charge. Sasha says that for many of the children involved in the program, “This becomes their art space.”

Studios on the Park has also started an annual festival in Paso Robles, Paso ArtsFest. This event, which is in its seventh year, happens each Memorial Day Weekend. The downtown Paso Robles park is alive with activity: the event includes artists showing their work, stilt-walkers, giant sand sculptures and activities for kids. Studios on the Park also organizes a “wet painting sale” which brings together twenty artists from out of the area to do paintings of local scenes. The paintings are made and sold that weekend.

Sasha says of Studios on the Park, “This is an art center unlike any other you have experienced. Our reason for being is to serve and inspire our community.” And, it appears that the critique is in: this work in progress is a hit!

Studios on the Park, located at 1130 Pine Street in Paso Robles, is open from Noon to 6 p.m. Thursday and Sunday and Noon to 9 p.m. Friday and Saturday. Call (805) 238-9800 or visit www.studiosonthepark.org for more information.