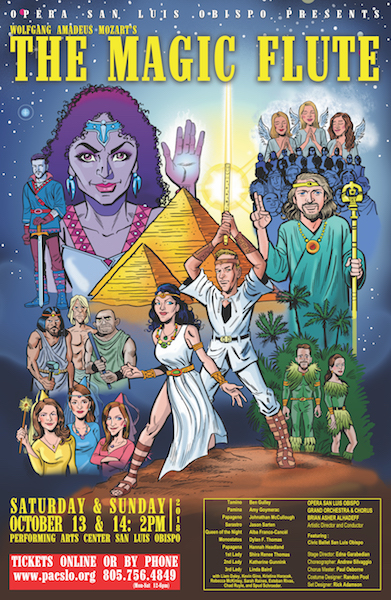 –Opera San Luis Obispo (OperaSLO) will present Mozart’s beloved classic The Magic Flute on Oct. 13 and 14. Both performances will begin at 2 p.m., at the Performing Arts Center San Luis Obispo.

It originally premiered in 1791, conducted by Wolfgang Amadeus Mozart himself — his final opera. Today, it is one of the most performed operas worldwide. “The Central Coast has had a long history with Mozart that’s been dormant for some time now. We want to reawaken that love affair with this fantastic family-friendly production of The Magic Flute,” says Opera San Luis Obispo’s Artistic Director, Brian Asher Alhadeff.

The Magic Flute tells the story of Prince Tamino’s quest to rescue Pamina, daughter of the Queen of the Night, from the mysterious high priest, Sarastro. A powerful magic flute and bells help Tamino and his friend Papageno, the bird catcher, survive trials of fire and water while learning about brotherhood and justice.

This magical adventure with fairytale characters, absurdities, enchanted musical instruments, and even a dragon, is Mozart at his comic best with an outpouring of famous melodies cascading one after the other. An irresistible opera, The Magic Flute is perfect for both opera aficionados and families of all ages.

Opera singers work their muscles much like athletes. They train for many years to use their body, full breath and entire vocal range. Mozart wrote an aria, a long song for a solo voice, for the Queen of the Night that is well-known for its Olympic-paced high notes. Atascadero resident Soprano Franco-Cancél says, “The Queen of the Night is one of the most spectacular and challenging roles in opera. I train daily my vocal extension and agilities to be ready for such a demanding role. I was just in the Bay Area working with a renowned vocal coach, so I feel ready and excited to have this opportunity with OperaSLO.”

OperaSLO is proud to bring back the creative team that produced La Bohème (2016), Madama Butterfly (2017), and Oklahoma! (2018) with stage director Edna Garabedian, choreographer Drew Silvaggio, chorus master Paul Osborne, and set designer Richard Adamson. Original costumes by resident designer, Randon Pool, will be especially festive. “She has spent months developing a huge dragon, and I was thrilled to see technical drawings for the 15-foot-tall gown for the Queen of the Night; it’s going to be spectacular on so many levels,” Alhadeff said.

As Artistic Director and Conductor of OperaSLO, Maestro Alhadeff will lead both performances with the exceptional Opera San Luis Obispo Grand Orchestra and Chorus. Each performance will feature a pre-show talk by Masonic Grand Master Stephen Doan, one hour before curtain.

This production of The Magic Flute is generously underwritten by King David’s Masonic Lodge of San Luis Obispo, which highlights an exciting historical connection: Mozart and Emanuel Schikaneder, his librettist (author of the opera’s lyrics) were both Freemasons, and the opera’s theme is the ultimate triumph of reason and justice, ideals popular during the Age of Enlightenment — and with the Masonic Order to this day. The Magic Flute is peppered with Masonic symbolism, which audiences have been trying to decipher for over 200 years. “It’s not that mysterious,” explains Robert Sachs, current Master of King David’s Lodge. “By facing fantastic ordeals to achieve a heroic purpose and outcomes, Mozart dramatizes symbols of Masonic ideals about brotherly love, helping your neighbor, and the search for knowledge. When Maestro Alhadeff approached me about helping to underwrite The Magic Flute, we at King David’s enthusiastically jumped at the chance to help make these performances possible.”

A local opera enthusiast, Steve Cohen, has been involved with OperaSLO for 12 years as a board member and all-around volunteer. He had a small part in Oklahoma! and will be in the chorus for this production. He and his wife are opera aficionados who have traveled extensively to view performances in San Francisco, London and other metropolitan cities. “I’m being truthful when I say that the performances produced by OperaSLO stand up very well when compared to those big opera houses,” said Cohen. “I’m very proud of what OperaSLO has become. It is amazing to have this quality of opera right here in San Luis Obispo County.”