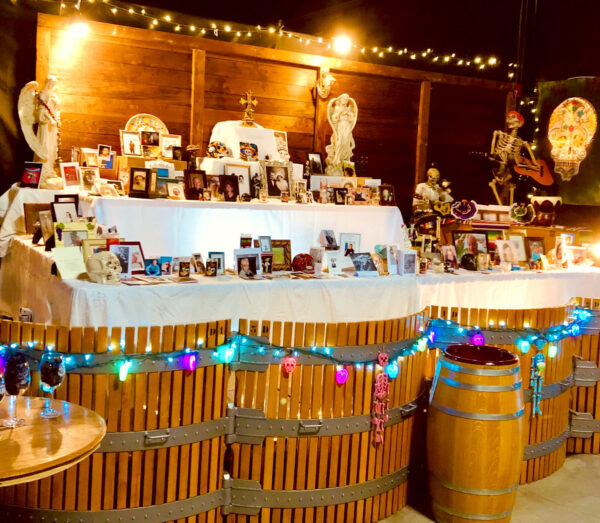 Bring mementos to celebrate the memories of loved ones

–October is always festive at Via Vega Winery In Paso Robles. There is the beauty and magnificence of harvest and the October Series wines, but there is much more. The winery also celebrates Dia de los Muertos, or Day or the Dead, featuring the traditional altar in the tasting room.

“We welcome scheduled visits that are both safe and sincere. We have found small groups to be more intimate while also respecting social distances,” said April Gomez, who owns the winery with her husband and winemaker Larry Gomez.

“This past 18 months have been especially difficult for so many and we have all known loss,” she said. “This is a time to celebrate and honor the lives of those we have lost.”

Bring precious mementos to Via Vega Vineyard and Winery from October 1 through November 3. Pay your respects to the past, enjoy the present, and toast to the future.

“We will do our best to accommodate your schedule most days of the week during October,” said April.

Ornately decorated altars filled with candles, photos and mementos of loved ones who have passed on is a tradition associated with Dia de los Muertos, (Day of the Dead) that has roots in ancient Aztec, Mayan and Toltec cultures. Via Vega has been honoring the tradition since 2007, when the Vega family set up their first 8-foot community altar in the winery’s tasting room.

The altar has since grown to its present size of 24 feet, as more and more people show up to leave gifts or light candles in honor of friends, family and animal companions who have passed on.  Altars, traditionally known as altares de Muertos, or ofrendas, are the most prominent feature in the celebration because they are said to guide the souls back home.

Although Dia de los Muertos has ancient Mesoamerican roots the arrival of the Spaniards brought the influence of the Catholic Church. Eventually, the celebrations merged with Catholic practices and began taking place on the Catholic calendar All Souls Day.

Celebrating memories of the dead is not exclusive to Dia de los Muertos. Most cultures around the world celebrate a time of year when the people believe the veil between the worlds thins or lifts, allowing the living and dead to communicate. Some believe spirits of the dearly departed return to this realm with advice to loved ones.

Dia de los Muertos is not about mourning or fear. It’s about joy and remembrance and celebrating memories. The ceremonies and family traditions for creating the altar, the colorful decorations and costumes and planning food and festivities appeal to many who are connected in spiritual ways and are pleased by the wide array of colorful décor and festivities that the holiday encompasses.

Via Vega is committed to keeping family, friends and community safe. All visits are by reservation and all safety precautions and best practices recommended by local and federal health experts are being observed.