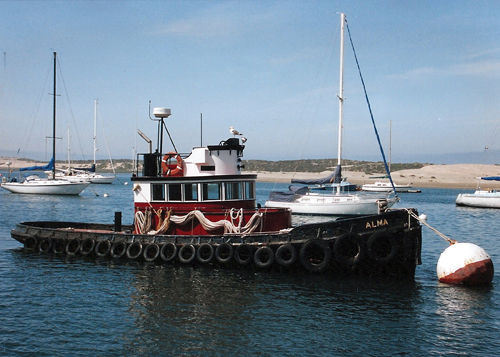 On a chilly winter morning, a small group of men and women gathered around a battered and tired looking 85-year-old tugboat. Perched on boat stands and topped with blue plastic tarps, the old wooden tugboat, Alma, was in need of a facelift, and she was finally getting one. In the fall of 2011 a group of dedicated volunteers began the long process of sanding, preserving, painting, and peeling off layers of age from the tugboat whose place in history was set on December 23, 1941.

It was on that day during World War II that a Japanese submarine sank the Union Oil Tanker, Montebello, off the coast of Cambria. The Alma and her captain, Merle Molinari, rescued 22 men from the Montebello’s lifeboats.

The devoted group restoring the historic Alma is the Central Coast Maritime Museum Association, or CCMMA. The mission statement of CCMMA is to provide an easily accessible educational venue for maritime history, science and technology.

Alma was donated to CCMMA by the Kelsey family, owners of Sylvester’s Tug Service. She was built in San Francisco and is typical of the small wooden tugs that worked in harbors along the west coast during the first half of the 20th century. Alma operated out of Morro Bay until she was retired in the early 1990s.

Over the past year and a half, volunteers have crawled above and below decks, over original 1927 hand-hewn oak planks and throughout an engine compartment still coated in mid-century oil and grime. Each nook, cranny, knee, and rib of the old tugboat is being cleaned and painted.

In addition to the Alma, the Association has been fortunate to obtain additional vessels to display in an outdoor exhibit on the Embarcadero in Morro Bay. The Alma will soon join a 30-foot Coast Guard Surf Rescue vessel and the Deep Submergence Rescue Vehicle (DSRV) Avalon. “Many people don’t realize that Morro Bay was a naval station during World War II,” Larry Newland, President of CCMMA explained, “so obtaining a vessel like the Avalon for the museum fits our purpose.”

The Avalon arrived in Morro Bay in June of 2012 after more than a year of planning and preparation. She is one of only two rescue submarines built for the Navy by the Lockheed Corporation and was designed to rescue crews of downed submarines. The Avalon was used for research and training around the world and more than $10,000 was raised to obtain and transport the vessel to Morro Bay. Those involved in the process included Congressperson Lois Capps and Morro Bay mayor Bill Yates, who wrote special request letters to the Navy on behalf of the Maritime Museum.

“The preservation and display of these historic artifacts are important ways for Morro Bay to preserve its heritage,” Newland said. “These boats and Morro Bay’s maritime history are what make Morro Bay unique.”

The historic vessel exhibit, on the Embarcadero, has proved to be popular with visitors who can often be seen reading the informational panels at the outdoor exhibit and taking photos in front of the impressive DSRV. “A friend of mine told me that, next to the rock, he thinks the DSRV is the second most photographed thing in Morro Bay,” Newland said.

CCMMA’s Phase I has been getting the outdoor display of historic vessels established and now they are working on obtaining a long-term lease with the city for the site for Phase II of their plan, a 1,500 square foot museum building. “The city is really on board,” Newland commented, “and we have a memorandum of understanding in regards to the building site.” Architect Jim Maul has drawn up the plans for the building which will be sited near the historic vessel exhibit.

The Alma is an important part of Morro Bay heritage and now, after over a year of hands-on attention, CCMMA will soon move the tugboat to join its other historic vessels. Newly restored, and looking better than she has in years, the Alma will contribute strongly to a unique sense of place and pride in Morro Bay. CCMMA is planning an event when the Alma returns to the waterfront and hopes that everyone will come out to celebrate.

None of these worthy goals come cheaply or easily. The CCMMA is in need of financial donations, materials, volunteers skilled in the trades, and unskilled volunteers who are willing to lend a hand in order to maintain Alma and the current exhibits.

Drop by the Embarcadero outdoor historical vessel exhibit and have a look. If you like what you see and want to help out, fill out an information card and drop it in the red donation box next to the Avalon. CCMMA will be in touch.