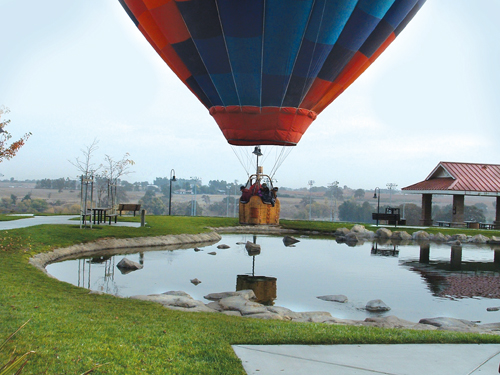 Let’s Go Ballooning! offers hot air balloon rides in Paso Robles as a way to explore new territory or see familiar surroundings from a new perspective. Owner John Warren has been a pilot since 1973. A former Marine, he learned to fly by taking advantage of the GI Bill. In John’s career as a pilot he has flown private planes, been a flight instructor and hauled freight—including live crab!

John started Let’s Go Ballooning! in 1995 near Glacier National Park, in Northwest Montana. He had recently sold a lodge and motel that he had owned for over ten years and was planning to purchase a single-engine Cessna in order to start a charter airplane tour business. While looking through ads for planes he came across an ad for a hot air balloon and his vision of his new business changed.

John and his wife had received a gift of a hot air balloon ride as a wedding gift some years before, and the flight in Paris, CA had been a positive introduction to this form of flight. He purchased the balloon and Let’s Go Ballooning! was formed. In 2004, seeking a location that would allow for year-round flying, Let’s Go Ballooning! began offering rides in Paso Robles.

Now, Let’s Go Ballooning! has three balloons in its fleet – one is in Montana, and two in Paso Robles. The balloons, in Paso Robles are 90,000 cubic feet and 105,000 cubic feet; each holds a maximum of four passengers. Having balloons of different sizes allows John to have more flexibility while planning for flights as each balloon flies best under different conditions.

It is important for hot air balloon pilots to know the area around the balloon’s departure spot. As John says of the rides, a balloon seldom ever comes back to the spot from which it took off. A chase vehicle follows the balloons throughout each flight and at the end of the ride John brings the balloon to a suitable landing spot. The driver of the chase vehicle then approaches the owners of the property to ensure that they don’t mind that a hot air balloon has just landed on their property.

John says that most people are fine with the unexpected arrival, many are excited, and he always ensures that his landing spots will not be disturbing any livestock or crops. He has a mental map of properties in the areas where he flies—many of which have owners who encourage him to land in their empty fields or unplanted crop lands. John says, “In eighteen years I have never had anyone refuse me.”

Let’s Go Ballooning! offers its one-hour rides in Paso Robles each day at sunrise, as the area tends to get windy in the evenings. John flies out of the east side of Paso Robles for six months of the year and out of the west side for the other six months. This ensures the most favorable conditions for each ride. John says that Paso Robles does not have consistent winds, so each flight is a different route. This is something that he particularly enjoys about his job—that it is different each day. He also says that hot air ballooning is enjoyable because it is “always calm in the basket because you are going with the breeze.”

John says that of all the flying he has done hot air ballooning is distinct in that riders can hear the sounds of the world below them—birds chirping, people talking. A ride with Let’s Go Ballooning! is a wonderful way to explore Paso Robles from a new angle.

For more information on balloon rides with Let’s Go Ballooning! visitsloballoon.com or call (805) 458-1530.