Walk down the Moonstone Beach Boardwalk and explore the tidepools 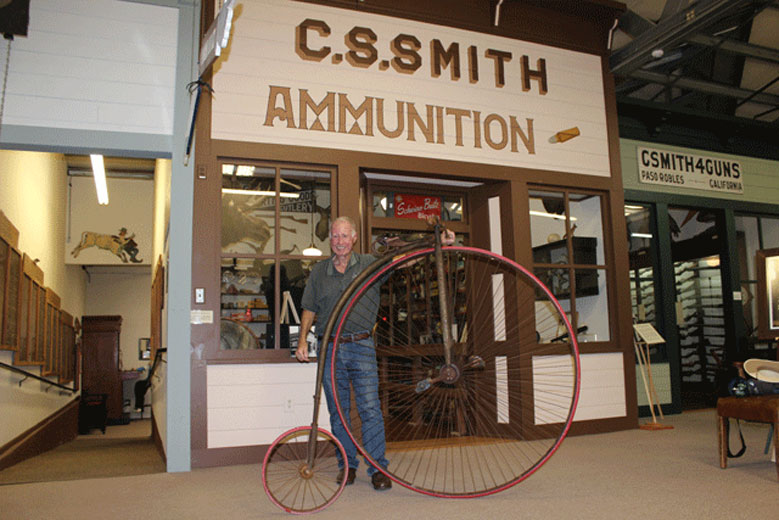 Gary Smith stands with the 1890 high bicycle that his family donated to the Pioneer Museum. The bicycle was recently restored and will be installed on the wall next to the C.S. Smith store, named for Smith’s grandfather, Clark Sherwood, who rode the bicycle from San Francisco to Paso Robles in four days in 1893.

This October, there will be a new item on display in the Smith Store in the Paso Robles Pioneer Museum: an antique bicycle that Gary Smith’s grandfather, Clark Sherwood Smith, rode from San Francisco to Paso Robles in four days. Pioneer Museum volunteer Chuck Desmond said that Clark lost 40 pounds on that four-day journey in 1893 on a large-wheeled bicycle built in 1890 by Columbia Manufacturing Company in Boston.

The high bicycle — also called an ordinary bicycle at the time or a penny-farthing in England because a penny represented the front wheel and a smaller coin, a farthing, represented the rear — was invented by Frenchman Eugene Meyer in 1869. Clark’s family moved to Creston then to Paso Robles when he was a young boy. Later, he went to find his “trade” by moving to Los Angeles first. After getting a letter from his father that there was an opening in Oakland, he moved to the Bay Area and worked for a company where he learned a wide range of skills from bicycle repair to locksmithing and photography and more. In 1893, he decided to return to Paso Robles and did so on his bicycle. The bicycle has narrow tires that are made of hard rubber, not of the air-filled tubing that allows some give when traversing over rough terrain.

The bicycle has been in Smith’s family its entire lifetime, until that is, his father, Clark Muirson Smith, died in 1987. That same year, Smith and his brother, Gerald, donated it to the Pioneer Museum. In March 2013, Pioneer Museum docents took the bicycle to Rideable Bicycle Replicas Inc. in Alameda. With private donations, the museum was able to pay for the restoration, which included parts from other high-bicycles, as well as replicas being made for part that could not be salvaged.

“It was a lot of restoration,” Desmond said.

The bicycle returned to the museum in mid-September. There were fewer than 40,000 of the high bicycles made by 3,500 manufacturers over a span of 23 years. The large wheel is 56 inches tall and in order to get on the seat, there is a small platform to step on — and some old photos show a second person riding on the bicycle by standing on that platform.

The bicycle will be hung in the museum near the Smith store sometime in October, after the city’s annual Pioneer Day celebration on Saturday, Oct. 11.

“I sure want to thank all the people who made donations — not only for the bike — but those who donated to this wonderful museum,” Smith said.