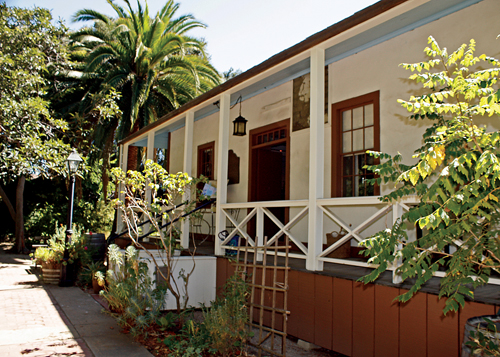 The Dallidet Adobe, designated as California Historical Landmark #720, opens visitors’ eyes to a period in time when the Central Coast was sparsely settled, made up of ranchos and farms.

Down a quiet street in San Luis Obispo and off in a corner sits a house that tells the story of a man who settled here in the 1800s and was instrumental in the start of the wine industry as we know it today on the Central Coast of California.  A docent-led tour of the Dallidet Adobe, designated as California Historical Landmark #720, will open your eyes to a period in time when this area was sparsely settled, made up of ranchos and farms.

It began with Pierre Hypolite Dallidet who was born in France in 1823, grew up there, and became a carpenter. A lingering depression during the 1830s caused him to enlist in the French army, leave his native land, and serve in Tahiti until 1851 when he was 28 years of age. The discovery of gold in
California had many men eager to go there with Dallidet among them. Rather than returning to France at the end of his army service, he decided to sail on a schooner from Tahiti and travel to the gold fields. He settled near Hangtown, which is the present day Placerville. Gold mining was a tough way to make a living and after two years Dallidet was discouraged and looking for something new. He joined with a group of men who were heading to Western Mexico in search of fortune. Troubles with the Mexican government halted them at San Luis Obispo and taking account of the area, Dallidet decided not to proceed but to settle here.

Gabriel Salazar, a Spanish/Mexican soldier owned the land that surrounds the present day Dallidet Adobe as well as farming land in the Chorro Valley where the present day Cuesta College is located. He offered lodging to the young man and Dallidet stayed on doing farm work and carpentry. Salazar had a daughter named Maria Ascencion and it wasn’t long before a romance developed between her and Dallidet. After a time a marriage followed and Dallidet purchased the property where the adobe is now located from his father-in-law in 1859. He built a three-room adobe dwelling. Dallidet and Maria Ascencion had seven children so sleeping arrangements in the small home had to be innovative. A garret space above the main rooms became the bedroom for the boys of the family. During the 1860s Dallidet built on an addition to the adobe out of wood. This contained a dining area and more bedrooms.

In the interior of the adobe are furniture pieces that belonged to the family as well as personal items. The shelves in the library hold numerous French and English books from the family’s collection. A Victorian style sofa and chairs are placed near the sitting room’s fireplace. An impressive grand piano takes up the rest of the space in the room. Artwork and sculpture pieces are also arranged throughout the home and some of the art was done by Dallidet’s oldest daughter, named after her mother, Maria Ascencion.

In one of the bedrooms, a hand carved and hand painted double bed is located with scenes depicting Tahiti. There are three camphor wood chests covered with hand painted leather derived from the early China trade and a treadle sewing machine is also in the room.

The dining room contains a large brick fireplace and other pieces of furniture that belonged to the family. The walls are decorated with mounted animal and bird carcasses under glass. Some early photographs of Dallidet’s land are displayed on a table.

Perhaps the most interesting thing about the adobe was the fact that Dallidet built a wine cellar under the structure according to French tradition. This feature makes the adobe unique as cellars were not common in homes of that day. Dallidet grew grapes on his land probably starting with Mission grapes and table grapes. Eventually, he grew several varieties on 14 acres of his land among them a rare Charbonneau grape that originated in the Savoie region of France and produced a dark red wine. Today this grape has morphed into a variety called Charbono that is still grown in Sonoma, California.

Dallidet built a winery which unfortunately did not survive the passing of time. Many table wines were produced here and Dallidet became well known for producing brandy. He had the first licensed distillery in the county and by 1870 was the first commercial vintner on the Central Coast thus starting the area industry that today counts over 200 wineries and is now known worldwide.

The Dallidet family lived in the adobe for more than 100 years preserving the structure and much of its contents. The last surviving son, Paul Dallidet, donated the adobe to the San Luis Obispo Historical Society in 1953 to be used as a meeting place. Paul passed away in 1958 and the property has been maintained as a museum ever since.