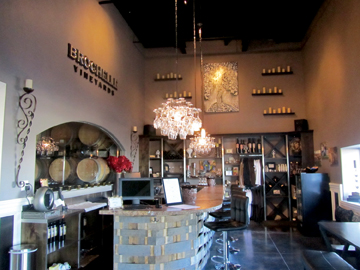 Brock and Michelle Waterman say they have a typical “city girl meets country boy” love story. “I grew up in Clovis, where my family grew fig trees and raised beef cattle – but the winemaking culture really intrigued me,” says Brock, and Michelle finishes, “I’m from Southern California – I knew I liked wine and the winery atmosphere, and we met at the perfect time.”

Brock studied at Cal Poly between 1989 and 1994, and took a job in Sacramento, where he and Michelle met. While they were dating, they would make the one-hour trip to Napa for wine tasting as much as possible. Having fallen love with the wine industry by this point, they moved to Paso Robles in 1996, when Paso only had about 35 wineries. As they fell in love with each other, they also fell in love with the winemaking process and the Paso Robles appellation.

In 1997, they planted 20 acres of zinfandel on their property on Paso Robles’ West Side. They produced 50 cases in 1998, and they were hooked. Since then, they have expanded their vineyard to include a few blocks of petite sirah, grenache, mourvedre, and alicante bouchet. 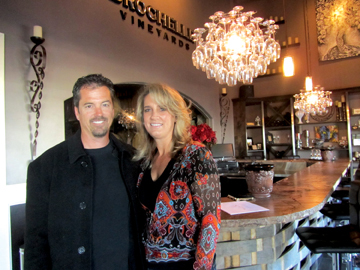 “We didn’t pursue the typical wine marketing formula,” says Michelle, “We didn’t submit our wine to competitions and didn’t have a tasting room. Instead, we focused on getting our wines distributed throughout the country, and that is how we built our following.” While the Waterman’s have been making wine since the 1998 harvest, they did not have a tasting room until January 2010. After one year at Meritage Tasting Lounge (formerly located in Downtown Paso Robles), they decided to open their own tasting room. They officially opened for business at their new location at 2323 Tuley Court in Paso Robles on Zin Fest weekend 2011.

The tasting room, which is barely one year old to date, takes visitors by surprise. It is located in a warehouse-style building, but the inside is reminiscent of a swanky club. There are wine glass chandeliers, cozy sitting areas, and a beautiful bar made out of reclaimed oak barrels. Brock and a friend did all the work by hand, because as Brock says, “If you want it done right, do it yourself.”

Brochelle Vineyards is located at 2323 Tuley Ct. #130 in Paso Robles. They can be reached by phone at (805) 237-0519 or online at brochelle.com. Brochelle Tasting Room is open from Thursday-Monday, 11:00am-5:00pm. They can also be found on Facebook: www.facebook.com/brochellevineyards and Twitter: www.twitter.com/brochellewinery.

The 2012 Zinfandel Festival will mark the tasting room’s first birthday, and Brock and Michelle have a full weekend of celebration on the books.
Thurs. Mar. 15: Winemaker dinner at Thomas Hill Organics
Fri. Mar. 16: Offering wine and Vivant Fine Cheese pairings at the tasting room
Sat. Mar. 17: Porter’s Food Truck will be parked at the tasting room all day with complimentary pulled pork sliders, and a DJ will be playing in the tasting room
Sun. May 18: More wine and cheese in the tasting room }}}
For the Waterman’s, winemaking is a family affair, and though their two boys (Braden, 9, and Bryson, 7) are young, they are very interested in the process. Says Brock, “During the 2009 harvest, our son Braden, who was seven at the time, filled his dump truck with grapes from the vineyard and crushed them into an empty Gatorade bottle. This was unbeknownst to us, but we are excited that we might have a potential future winemaker on our hands.”
Brock and Michelle’s passion is family. They each delight in meeting their customers, shaking their hands, and welcoming them to the Brochelle family.