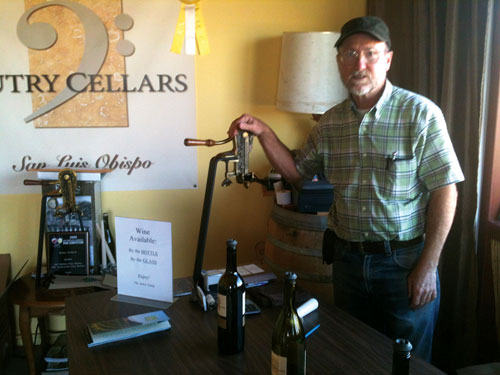 He is wearing a simple baseball cap in place of the signature, black, pork pie hat, but upon first encountering Steve Autry, owner and winemaker at Autry Cellars in SLO’s Edna Valley, I can’t help but draw an unlikely comparison with the now famed “Walter White” character of the classic show Breaking Bad. While White is a chemist-turned-meth-cook in that show, the similarly visaged Autry’s background is physics, and his poison of choice is the much more legal and noble production of wine and brandy.

Nevertheless, the parallel continues as Autry tells me (with a slight, distant twang that is perhaps a vestige of his blood connection to the country singer Gene Autry) of his former career in aerospace research and his passion-bordering-on-obsession with the science of winemaking.

“It’s very artistic, very scientific and it really toots my geek whistle,” he says happily. “Not a day goes by we don’t use the physics.”

Any questions about the intersection of physics and oenology quickly lead the uninitiated into uncharted waters, where Autry tosses around ideas on the topics of distilling spirits, vaporizing metals, and building insulation with the ease of a lab scientist. I feel under-qualified to interview, and wonder if he is overqualified to be making wine. But he insists that there is no end to the applications of science to winemaking, nor to his ravenous curiosity which has led him by a seemingly gravitational force from a hobbyist making wine in his garage, to the go-to man at Doc’s Cellar (the local home-brewing store), and finally to his own winery at Autry Cellars.

His description of his former tasting room—inside an industrial warehouse with a view of broken down cars and trucks, a two-story grey brick wall, a dog on a chain at a welding shop, and a meatpacking plant—makes the wine industry sound pretty tough, and indeed not so removed from the world of Walter White. By contrast, his new tasting room sounds almost too good to be true.

“We’re on the main wine trail between the two biggest wineries in the valley, Tolosa and Edna Valley, with about a 30-mile view of mountains, a full panorama of the Santa Lucia Mountains, looking at thousands of acres of grapes.” He lists off the wildlife in the vicinity—jack rabbits, brush rabbits, weasels, red tail hawks, peregrine falcons and more—as he leads the way onto redwood decks which, he says, on rainy afternoons provide a view of spectacular rainbows as well as a distant waterfall. “It’s kind of a cool little spot out here.”

From this new vantage point, and a large, 2,000 square foot facility, he now has the peace and space in which to carry out his passion – to preserve the greatness that other people have created in the vineyard. “One of the most beautiful things about those grapes,” he says, pointing out at the endless lined rows surrounding him, “is I don’t have to take care of them. They’re not mine. I buy all of my grapes.”

In fact, he worked for years to pinpoint a fine-tuned network of what he calls, “the rock stars of the growing industry: the passionate geniuses in the field that know how to bring a grape to its full potential.” So far, these grape growers span from Tres Ninos Vineyard in Arroyo Grande, to a Petit Sirah grower east of Atascadero, to the Bien Nacido French Camp vineyard south of Shandon, and to Paul Hoover at Stillwaters Vineyard in Paso Robles.

“My job is pretty simple: Don’t mess it up,” he says. “I do everything I can to get all the goodness out of the grape and into the bottle.”

He runs his winery like he would his lab, doing the crushing, fermenting, pressing, barrel aging, and bottling himself for each of his 16 different award-winning wines.

“It’s one of those things—if you want it done right, do it yourself,” Autry says.

Autry applies a lifetime of research in science to his work and stays abreast of the latest in the industry by attending seminars on topics such as yeast strains and new winemaking techniques. His most recent research has led him from wine to brandy—the distilled form of wine, he explains. The only winery in Edna Valley licensed for brandy production, he has four brandies in the works, including a clear, raw grappa-style brandy; an American oak aged brandy; a Hungarian oak aged brandy – a bit more minty and spicy due to the untoasted French oak, grown in the Zemplin Forest in Hungary, he notes – and an apple brandy program, which he has planned with a local apple orchard.

“I might actually put an apple wine on the market, as well. We’ll see,” he says, with an almost mischievous gleam in his eye. “There are a lot of possibilities, plenty of room to play.”

If you want some of the good stuff Autry’s putting out, it’s not always easy to come by – his wines are available at just four restaurants outside of his tasting room. However, Autry’s doors are open “every day ending in ‘y’” and you can also get in on regular distribution by joining his wine club.

Pay a visit to Autry Cellars at 5450 Edna Road in San Luis Obispo, open daily 11a.m.-5 p.m. or find more information at autrycellars.com. Meet Steve Autry during the Roll Out the Barrels weekend, pouring at Barrels in the Mission at Mission SLO on Thursday, June 19. As part of the Passport to SLO Wine Country portion of the weekend, Autry and his band mates, the Local Vocals, will perform at the winery on Saturday & Sunday, June 21 & 22.