Experience relaxation in the heart of wine country

Take a hike on the scenic Pismo Preserve

Adventure awaits you in Morro Bay 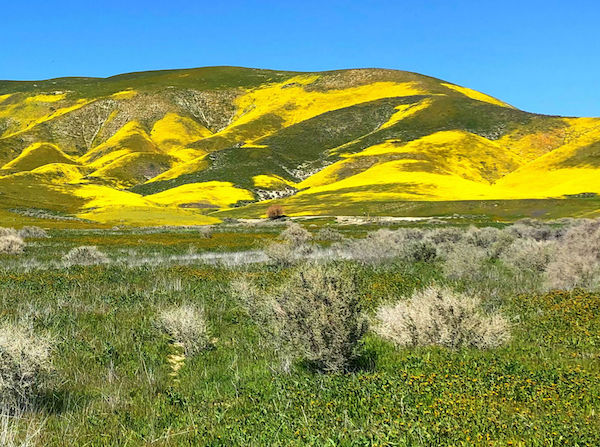 One man’s experience in the Carrizo Plain National Monument

Arriving early to watch the sunrise from a vantage point near Soda Lake, observed the white mineral deposits bordering the water reflect the swelling glow from the east. Orange tints injected a promise of color into the gray fading night. Ragged peaks sharply etched against the horizon slowly spill the first rays of sunlight into morning. The blunt-nosed leopard lizards, pronghorn, tule elk, owls and high-flying ferruginous hawks begin their scurrying and soaring.

The melodious refrain from western meadowlarks accompanied my walk downhill to Soda Lake. Rainfall that once drained into the Salinas River is now trapped in the shallow basin. Covering 3,000 acres when full, Soda Lake is the largest remaining natural alkali wetland in southern California. Evaporation leaves a vast shimmering expanse of mineral salts.

With a typical annual rainfall of under 10 inches Carrizo, which has been called California’s Serengeti, is an arid grassland with wildlife and vegetation typical of a prairie. Carved out by mountain-building earthquakes along the San Andreas Fault, the nearly 250,000-acre flat plain is sacred to the Chumash people who call it “the place of the rabbits.”

Eager to arrive on time for a coveted guided tour of Painted Rock I hastened back to my car. Painted Rock is a sandstone outcrop that has been sacred to the Chumash, Salinan and Yokut people for generations. Access is by reservation only to protect ancient pictographs and nesting raptors.

Pictographs in layers of black, red, and white pigment dated from between 3,000 to 200 years ago are painted on the eroded cave walls. These representations of water, fertility, rain, animals, humans and spiritual beings survived centuries. Modern graffiti and shotgun blasts have not been so kind.

A pair of long-eared owls peered from the cave darkness, patiently waiting for us to leave. A hawk circled overhead. Coyotes, foxes, badgers, and other small mammals survived the farming era, but hunters long ago cleared away anything large and edible. In 1985 Carrizo was one of the first areas in California to re-introduce pronghorn and tule elk. Elk herds are thriving but the pronghorn isn’t doing so well. Few fawns can outrun coyotes and adults can’t leap barbed wire fences to escape.

In the spring, following heavy winter rains, Carrizo is a super bloom location where purple owl clover spears through yellow oceans of blooms. On higher ground white-edged petals cast a lemon hue fading into dense mid-valley areas of golden fiddleneck. Fortunately, many native flowering plants are drought-tolerant and send up glorious blooms every spring even after limited rainfall.

Heading to Wallace Creek, I pondered the tectonic energy silently building pressure underfoot. The creek, flowing downhill from the North American Plate across the restless San Andreas Fault to the open plain on the Pacific Plate, is evidence of the seismic activity that shaped California. As that plate moved northwest, the channel following the fault line has reached about 150 yards in length. Although the average shift is just over one inch per year, displacement happens in sudden jerks. Geologists say that this section of the plain lurched 30 feet north in the few terrifying seconds of the devastating 7.9-magnitude Fort Tejon temblor of 1857.

If you plan to go

Established in 2001, the Carrizo Plain National Monument, managed by the Bureau of Land Management is located about 70 miles east of San Luis Obispo. The northern entrance is from Highway 58, the southern is from Highway 166. Allow four-plus hours of driving time from San Francisco or Los Angeles. There are no services for water, food, or fuel. Expect warm, dry summers with triple-digit temperatures and wet winters.

The Goodwin Education and Visitor Center is open from December-May. Maps and brochures are at the front door when the center is closed. For more information visit blm.gov.