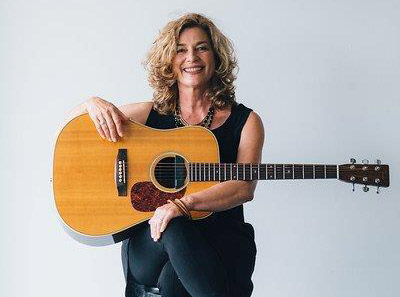 As her 75th birthday approaches in November, Joni Mitchell seems ubiquitous in the public eye. A new biography by author David Yaffe earned a fawning review in the New Yorker. In 2017, her 1971 masterpiece Blue topped NPR’s 150 Greatest Albums by Women. Photos of the icon backstage at James Taylor’s recent Hollywood Bowl performance circulated widely on Facebook. All this, despite the fact that Mitchell’s last recording was over 10 years ago and she hasn’t performed in longer.

This explains why A Celebration of Joni Mitchell, featuring veteran Santa Barbara songstress Kimberly Ford, continues to wow near-capacity crowds with her tribute to the iconic singer-songwriter. Ford and her five-piece band make their San Luis Obispo debut at the Fremont Theater on Saturday, Sept. 1, 2018. Doors open at 8 p.m. with the show at 9 p.m. Tickets are $18, $23 and $28.

The band is coming off several big shows in the last year, including a nearly sold-out concert at Ventura’s Olivas Adobe Park where septuagenarian women danced in tie-dyed shirts with flowers in their hair. Graying men openly cried when Ford encored with Woodstock. Yes, Mitchell’s music dredges up those emotions more than four decades after she penned the anthem about the gathering at Yasgur’s Farm.

Other significant performances include Kuumbwa Jazz Center in Santa Cruz; JoniFest in New Orleans; The Gaslight Theater in Oro Valley and Green Valley Performing Arts Center (Tucson, AZ); and a nearly sold out concert on Joni’s birthday in 2016 at the Lobero Theater in Santa Barbara.

In November, the band opens a five-city tour at SOhO Restaurant and Music Club in Santa Barbara, followed by stops at Yoshi’s (Oakland); The Reel Fish Shop and Grill (Sonoma); Kuumbwa Jazz Center (Santa Cruz); and Palms Playhouse (Winters). Ford has also toured in Fresno, Visalia, Ojai, Camarillo, the Midwest and Ireland since founding the band more than five years ago.

Joni fans just can’t seem to get enough at these events, singing along on such baby-boomer anthems as Big Yellow Taxi, Both Sides Now and, of course, Woodstock. The band covers a large swath of Mitchell’s repertoire with a focus on her early years through 1980. Other tunes include Free Man in Paris, Court and Spark, Help Me, Conversation, You Turn Me On, I’m a Radio, Blue and River.

“Playing the music of Joni Mitchell continues to surprise and move me as a musician and also as a woman,” Ford said. “Her articulation of love, loss and the constant search for truth have both a spare and laser accuracy.”

Ford’s passion for music — and all things Joni — began in her native Fresno, where she caroused the city’s burgeoning arts district. She landed in Santa Barbara in the early 1980s and lived briefly in Seattle, where she studied at the Cornish College for the Arts with Jay Clayton. Further studies ensued at the Banff Jazz Institute with Sheila Jordan.

Ford eventually returned to Santa Barbara where she honed her skills at local watering holes. Today, she is an internationally known singer and guitarist with four CDs, spanning jazz to Americana genres. She maintains a robust private teaching practice at her home-based studio and also works as a clinician with the Santa Barbara Vocal Jazz Foundation.

Mitchell, who suffered a brain aneurysm in early 2015, still ranks as the poet laureate of the 1960s singer-songwriters. Over more than three decades, the multiple Grammy winner molded contemporary folk with elements of rock, jazz and world music into a sophisticated and peerless sound.

Her canon of work is more relevant today than ever. Writing for NPR, music critic Ann Powers said that “after nearly fifty years Blue remains the clearest and most animated musical map to the new world that women traced, sometimes invisibly, within their daily lives in the aftermath of the utopian, dream-crushing 1960s.”