Learn about olive oil by tasting it

Red Scooter Deli for breakfast, lunch or an afternoon snack 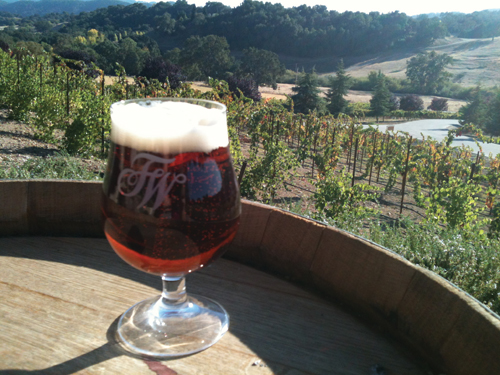 This is the major lesson to be learned at Paso Robles’ two breweries, Firestone Walker Brewing Company and its newer neighbor, BarrelHouse Brewing Company, each about two miles from the other off of Ramada Drive.

Firestone Walker literally started in a winery, in 1996. First started as a winemaker experiment in the back of the barrel room at Firestone Winery & Vineyard in the Santa Ynez Valley, the operation quickly grew to need its own facility and dedicated staff. But moving the operation to the current location in Paso Robles, which last year unveiled a new restaurant, The Taproom, in addition to recent brewhouse expansions, didn’t put an end to its connection with wine.

Not only is it still in the heart of wine country, but as Brewmaster Matt Brynildson explains, Firestone Brewing is and always has been founded on the concept of barrel fermentation. For beers like their popular Double Barrel Ale, he says, they take a “very clean, straight-ahead English Ale” and ferment it in oak. “The sole purpose of that is to pick up that oak flavor from the barrel, and to take advantage of that interesting geometry relative to other fermentation vessels. It really translates to adding this fifth element to what would otherwise be a pretty standard ale.”

From barrel fermentation, they progressed into barrel aging in 2007 with the release of their first Anniversary Ale. That project has since grown into the Firestone Reserve program, which includes high-gravity beers, such as the Velvet Merkin and Parabola, which enjoy cult-like followings.

Now, starting in early 2013, the brewery has moved definitively into another beer-barrel experiment, by opening their new BarrelWorks facility in Buellton, dedicated solely to “wild” beers (also available on tap at the Paso Robles location).

“In BarrelWorks, what we’re really doing is taking that [barrel aging] to another extreme level and re-fermenting it once again. It’s a thing all its own,” Brynildson says. Take, for instance, Agrestic: “The core of that beer is Double Barrel Ale. Secondary fermentation is in one-time-used wine barrels, and it takes on this gorgeous cherry and interesting acidity,” Brynildson says. He explains that agrestic means rustic. “That’s really the style we’re making: very rustic, old-world beers,” he says, noting that they “likely taste a lot like what beer from farmhouse breweries tasted like a couple hundred years ago.”

Barrels are obviously also at the heart of the business at BarrelHouse Brewing Company. Founded by three friends and home-barrel-brewing compadres, Jason Carvalho, Kevin Nickell and Chris Vaughn, the brewery opened in February 2013 to much fanfare. “So far it’s been a ton of work, but the market seems to really be liking our beers,” CEO/Owner/Founder Jason Carvalho says.

Also in the heart of Paso Robles wine country, and down the street from a wine tasting room, their brewery offers the beautiful grounds—waterfall included—that you might expect from a winery (and in fact they do host weddings and other private events).  But you needn’t look far to see this tasting room is all about beer.

Carvalho says they currently produce 320 barrels a month, primarily of their portfolio beers— stout, rye, IPA, Kolsch and blonde style ales—to which they introduce a new beer every month (in October, it was the Harvest Ale, a pumpkin-vanilla-spice porter). In addition to draft beer, they just lined-up a bottle distribution program which will bring their beers to pubs, stores and restaurants all over the region.

Meanwhile, the brewery is quickly becoming known for its limited release Curly Wolf, a barrel-aged maple, vanilla whiskey stout. “I would say that’s our flagship,” Carvalho says, noting that they have several more bourbon and wine barrel-aged ales on the way, including the Harvest Ale porter, which they will age in barrels.

“We started barrel aging a long time ago, while we were home-brewing, and really liked what it did—the character that it introduced to the beer and the complexity—so, we always knew that was going to be one of our primary focuses,” he says. The process can be riskier and more time consuming, Carvalho says, but the friends believe it all pays off in the quality and taste of the final product. Moreover, being so close to the wine industry in Paso Robles, Carvalho says it makes a lot of sense for them to source barrels and grapes from the Paso Robles wine industry.

Beyond barrels, the BarrelHouse crew has several more surprises brewing. When we spoke, the brewery was a few days from announcing the winners for its first Pro/Am brewing contest. Carvalho also noted that they had broken ground on expanding their beer garden by two acres. They have also designated an acre for what they hope will become the BarrelHouse estate hop yard, from which they will make a specialty ale down the road. It will take a couple of years before they’re ready to be harvested, he says, but in the meantime the trellises are really cool to look at and serve as a demonstration garden for guests—some of which have seen hundreds of acres of grape vines, but have never seen beer hops before.