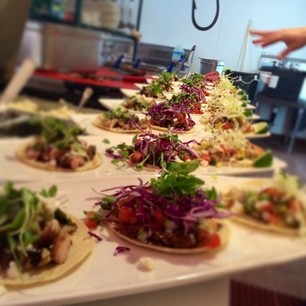 When the owners of Pappy McGregor’s in SLO and Paso decided to bring a taste of California Mexican cuisine to downtown Paso Robles with the opening of their newest eatery, Fish Gaucho, they hoped their newest venture would be a welcome addition to the food scene. From the time they held their soft opening – with rave reviews – to the day Fish Gaucho officially opened its doors in mid-June and now, just months later, Donovan Schmit and Troy Larkin have witnessed a steady flow of satisfied customers.
“We have received tremendous feedback from everyone that stops by,” Larkin said. “People really love this place – the food, the drinks, the atmosphere – and they keep coming back for more.”
Cousins Schmit and Larkin brought along Chef Chris Beckett from their SLO restaurant to run the Fish Gaucho kitchen; Matt Hanson serves as the dining room/bar manager.The demands of running three successful businesses now have Schmit overseeing the two Pappy’s pubs while Larkin attends to the daily demands that come with launching the new restaurant.

Fast becoming one of the most popular eateries in downtown Paso Robles, Fish Gaucho features fresh fish, various taco offerings, a tequila bar, and more in what Schmit refers to as a “family-friendly environment.” Sourcing from local suppliers, the emphasis is on seasonal foods.
“Our favorite food is Baja-style Mexican,” Schmit said. “It’s healthy, everything is fresh, and there are a lot of seafood dishes. We cook this way a lot at home and it’s also the favorite type of food of our chef, Chris.”
The idea for their new venture came to the cousins around a year or so before the opening of Fish Gaucho when they were spending time in Playa del Carmen, south of Cancun. While enjoying the fresh food offerings of the area, they thought, “We need something like this in Paso.”
“We were right – our customers keep asking for more,” Larkin said. “We have increased our offerings over time to allow for more tequila and more fresh fish.”
Located on the corner of Park and 13th streets, the space the new eatery now occupies underwent major renovations over the course of several months including the installation of a commercial kitchen. Schmit describes the interior of Fish Gaucho as “elegant, colorful, happy and quite unique.”
Unique indeed – the bar is concrete with a polished, cobalt blue top and the entry chandelier has glass-blown fish hanging from hooks. The furniture, hand-crafted in Guadalajara, ties it all together.
“We wanted it to be bright and full of energy,” Schmit said.

The bar boasts draft and bottled beers, hand-crafted, seasonal cocktails, local wines and, of course – tequila. Currently, Fish Gaucho boasts over 100 different tequila offerings for customers.
“We are passionate about tequilas, so we wanted to have a great tequila list,” Schmit said. “We have fresh-squeezed margaritas with unique flavors like watermelon-mint or charred jalapeno-pineapple – they are the type that you find down in Mexico with a new twist; we will change the flavors depending on seasonal fruit offerings.”
The menu currently has four fresh fish offerings, three varieties of cevice, and two or three oysters, with choices rotating daily to meet the demands of repeat customers.
“Our Save Dinero happy hour has been a big hit with the local crowd,” Larkin said. “We offer discounted draft beers, select margaritas, and three or four appetizer choices from 3 to 5 p.m. daily.”
Fresh salsas, ceviche, lobster, scallops, tacos, tequila – all this and more beckon visitors to Fish Gaucho in downtown Paso Robles.

Fish Gaucho, located on the corner of 13th and Park at 1244 Park St. in Paso Robles, serves dinner daily starting at 3 p.m. and is open for lunch Saturday and Sunday at 11:30 a.m.; the bar is open daily until midnight. View the menu at www.fishgaucho.com; call (805) 239-3333 for more information.
–Meagan Friberg