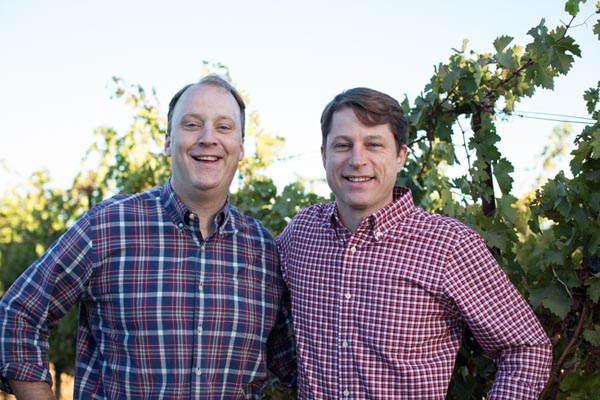 – The Glunz Family can trace their history of involvement in the wine, beer and spirits industry all the way back to to the 1870s. Now, the two-brother team of Stephan and Matthew Glunz, has recently opened a winery located on Highway 46 East.

The brothers opened their winery last year, and have recently broken ground on a brand new tasting room, which they hope to have open by the beginning of 2016. The winery offers complimentary tastings, and affordable, drinkable, craft wines. “These are the kinda’ wines that we like to drink, that’s why we created them,” said Stephan.

Owning a winery was always a family dream. Decades ago, Stephan and Matt’s grandfather, while working in the family business bottling wines, would look at the labels of chateaus on hilltops surrounded by vines in far away European locales, and dream of one day owning something like that. “They called him a dreamer,” said Joe, and now, generations later, the boys have realized their grandfather’s dream, “Well, it’s not a chateau,” they said, chuckling, but the winery has a prime location next to notable neighbors such as Tobin James and Justin, and, once the new tasting room is open, the brothers will be well on their way to success in the wine production world.

The Glunz family story began in 1879, when Louis Glunz I arrived in Chicago from his native Wesphalia, Germany. With little more than the clothes he was wearing and the dream of starting his own business, Louis took a job as a deliveryman with Wacker & Birk, a Chicago brewery owned by prominent civic leader and businessman Charles H. Wacker. Louis worked hard, and became a favorite of the Wackers. They showed their gratitude in the form of a business loan. In 1888, Louis set up shop as a wine, beer and spirits merchant at Wells and Division streets where his grandchildren and great grandchildren continue to do business today. 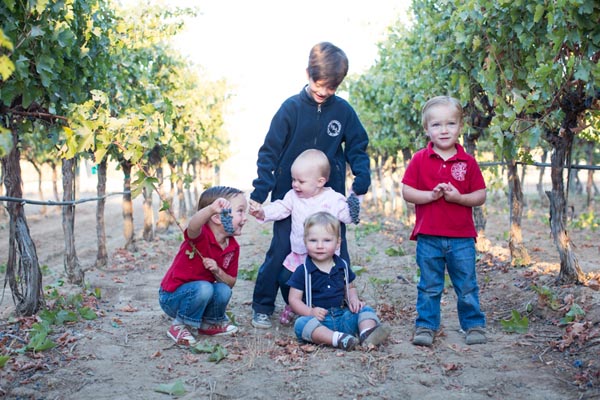 The fifth Glunz generation hard at work in the vineyards of Paso Robles.

Shortly after Louis opened his beer and wine business, he acquired a tavern next-door and sold beer and sandwiches. Meanwhile, his retail business was growing. He was bottling his own beer, wines, cordials and spirits and becoming a supplier to the wealthy leaders of Chicago industry.

Each day he delivered kegs of beer and baskets of wines and spirits to the German taverns along Lincoln Avenue. In the basement of the two stores, he bottled beer for the next day’s orders, and bottled, corked and labeled wines to be laid down in his cellars.

Louis married Elizabeth Mitterbacher, and together they had three boys and three girls who would all play roles in the Glunz story: Louis II, Bertha, Joe, Edwin, Cecelia, and Anna. A tradition was established in the Louis Glunz family that united each succeeding generation – by the age of 5 or 6, each of Louis’s children was learning the business as he had – from the bottom up.

On Nov. 18, 1918, when the U.S. Congress passed the temporary Wartime Prohibition Act, banning the sale of alcoholic beverages having an alcohol content of greater than 2.75 percent, Louis guided the company through these difficult years by making sacramental wines and medicinal products the mainstay of the business. The Glunz Family Winery label features a cross on it, which is a nod to the Prohibition days where most of the wines were made for use in churches. 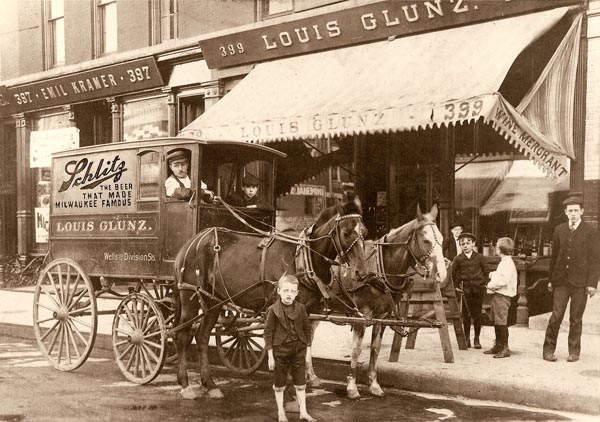 Louis Glunz II, circa 1900, standing next to the horse in front of the family’s wine store on Wells St. in Chicago.

Louis Glunz I died in 1931. Louis II took over the family business. Louis II and his wife, Clare Stubing, raised five children: Louis III, Patricia, John, Barbara and Joseph. At midnight on the day of the repeal of Prohibition in 1933, Clare and Louis II went to the railway yard for the first delivery of beer barrels. The bottling business began again.

In 1942 the business continued to do well, despite the rationing of beer during World War II. After the war, Schlitz capitalized on its popularity with troops overseas and led the way into mass marketing of beer. Louis Glunz Inc., with its long relationship with Schlitz, became a prominent distributor of Schlitz on the North Side of Chicago. Meanwhile, the third generation of the Glunz family pursued their educations while continuing to work in the business with their parents.

In 1956, Louis III started Regis Chemical Co., a chemical business in a warehouse the family owned across the street from the Wells St. store. Regis Chemical Co. continues to operate in Morton Grove, Illinois. In 1960, Louis III married Jean Madden and they became the parents of six children. Today, Louis and several of his family members run the business.

Meanwhile, Louis III’s younger brother, Joseph, after attending John Carroll University in Cleveland, transformed his father’s wine collection into one of the finest wine distributorships in the United States. Today, he is the president of Louis Glunz Wines. In 1964, Joseph married Helen Tuohy and had 10 children, many of whom are working in the wine business today. 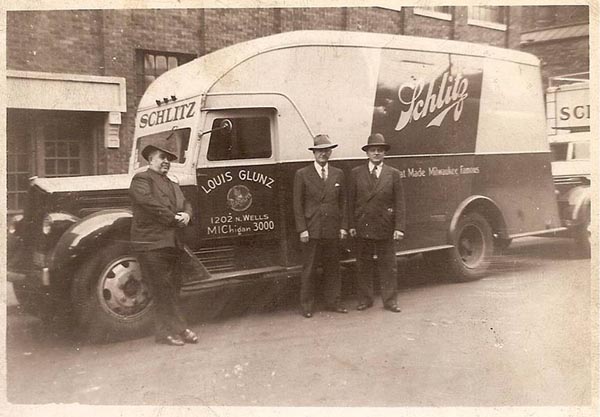 Louis Glunz II with Schlitz Truck circa the 1930’s.

In 1992, Helen and Joseph’s children, now the fourth generation of the Glunz family, opened their winery specializing in small batched fortified wines. As a family policy, any family member looking to enter into the family business must have three years of work experience on the outside. As a result of this, Joe Glunz Jr. after spending three years in Napa Valley, came home and to get the winery up and running in Grayslake, Ill.

After several years building the business from the ground up, Joe Jr. soon moved over to the family’s wholesale business. In his place stepped his sister, Suzzie Glunz. With expertise in retail, Suzzie helped to shape the winery and later opened a second tasting room in Long Grove, Ill. When Suzzie left to join the wholesale business, her brother Matthew Glunz took over the winery. Matthew, who had previously spent five years in Sonoma County, began introducing more California varietals and grew the business with assistance on the retail front from his sister Beth. With a passion for wine, Beth, Suzzie, Joe, Stephan and Matt Glunz have all worked at the winery at different times in their career. With the winery seeing steady growth, the Glunz Family decided they needed to expand their production facility. After spending a year pricing out the building of a larger winery in Grayslake IL., Matt suggested looking in Paso Robles California where the winery has been sourcing fruit for years.

Today, the winery is located on 20 acres in the rolling hills of Paso Robles, California. Matthew and Stephan are hands on owner operations of the winery, although most of the family is still involved in the beer, wine and spirits industry in some facet. The Glunz family ferments and bottles most of their wines in Paso.