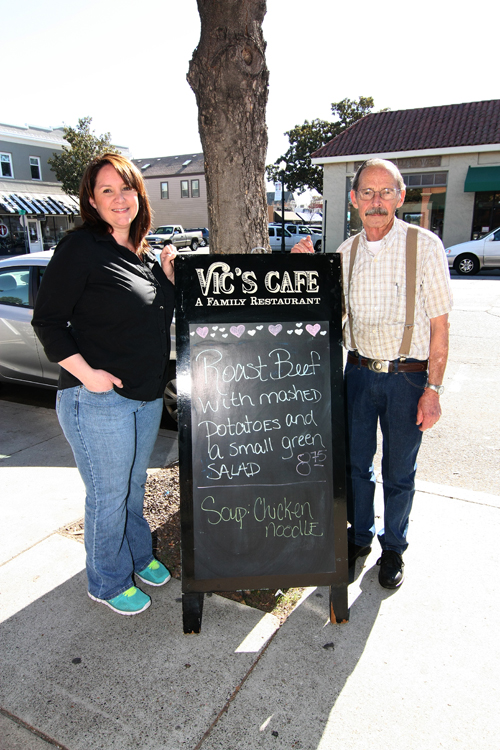 Larry Eastwood and his wife, Jan, have owned and operated Vic’s Cafe since 1973. He is pictured with their daughter Cheri, who is both Manager and Chef at the local eatery.

Six-thirty in the morning may seem an unlikely time to serve up a plate of liver and onions, but for the folks at Vic’s Café in downtown Paso Robles, it’s an order that hits the grill without a second thought. “I’ll fix them anything as long as I don’t have to eat it!” quipped Larry Eastwood who along with his wife, Jan, has owned and operated the historical community café since 1973.

At Vic’s it’s not all that unusual for customers to be seen enjoying a trout or steak dinner in the early morning hours. “Our menu has something for everyone at anytime of day,” explained the couple’s daughter Cheri, who is both Manager and Chef at the local eatery.

Vic’s Café serves up classic, Americana fare for breakfast, lunch and dinner, seven days a week. Most items are made from scratch including Jan’s famous homemade pies and cakes and Larry’s cinnamon rolls and biscuits and gravy. They also make and sell their own beef jerky.

The extensive menu boasts hearty breakfasts of omelets, scrambles and pancakes alongside lunchtime choices of grilled or charbroiled sandwiches, burgers, melts and salads. Dinners include downhome country favorites like chicken fried steak or a breaded veal cutlet smothered in gravy, as well as steaks, sandwiches and seafood.

A kid’s menu and daily specials are available for breakfast, lunch and dinner including a regular, Saturday night prime rib meal complete with trimmings. Wine and beer selections feature selections from local vineyards.

Chef Cheri, who graduated from the San Francisco Culinary Academy in 2007, understands that the longevity of her family’s restaurant is notable amid our restless culinary culture. While she has added more steak and seafood choices to the menu, along with specialty salads, sides and homemade soups, she strives to maintain the café’s heritage of comfort-food classics.

“I don’t want to change what my Dad’s made here,” explained Cheri. “I want to keep the staples like biscuits and gravy, but I also want to include some new items that appeal to a wider audience.” As she steers it into a new era, Cheri’s goal is to keep the café firmly planted in its roots as a family-friendly, welcoming place for folks to enjoy an affordable and satisfying home cooked meal.

Paso Roblans have been gathering at Vic’s Café since Victor B. Buckley, a Camp Roberts Mess Sergeant, and his wife, Lorna opened the restaurant in 1942. Victor cooked while Lorna waited tables, pouring 5-cent cups of coffee. Together they won the hearts of locals and quickly became part of the growing community.

With Victor’s passing in 1972, Lorna looked to Larry Eastwood to purchase the business. Satisfied with his position at the Paso Robles Country Club, Larry declined – more than once. But Lorna was tenacious; she turned down several offers while waiting for Larry to come around.

Since reopening in early 1973 under ownership of the Eastwoods, the café has relocated once, along with most of its original furnishings, including the counter stools. The retro elements and country décor lend the café its authentic Americana feel, without seeming trendy or pretentious.

Like all good, honest food, the time-tested recipes, satisfying proportions and friendly staff found at Vic’s bring families and friends together. Long-standing, regular customers arrive daily, at their usual times, to enjoy the local flavor and swap stories.

Gloria and George Olmstead have been driving from their home near the shores of Lake Nacimiento everyday for years to enjoy a mid-morning meal at Vic’s Café. “We love the homey atmosphere and the people,” explained Gloria. “Everybody is so friendly, the waitresses are fantastic and the food is always good.”

Gloria, who’s on a special diet, savors a meal that’s prepared just for her. “They can do anything you ask them to do,” she enthused. “It’s just like home.”