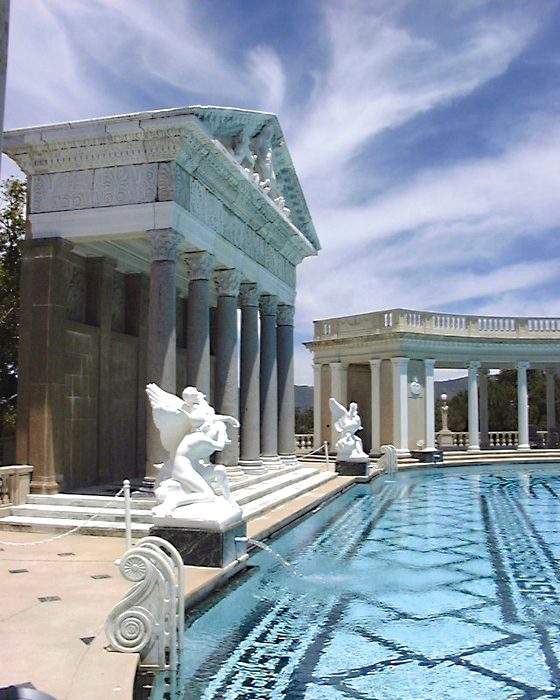 –Join the millions who have visited hilltop San Simeon estate of Hearst Castle to explore the architecture, art, and gardens of “The Enchanted Hill.”

Hearst Castle opened to the public as a California State Park in 1958, but before that it was the home of publisher, movie producer, and art collector William Randolph Hearst (1863-1951).

In 1865, George Hearst, a wealthy miner, purchased 40,000-acres of ranchland that included the Mexican Ranchos of Piedras Blancas, San Simeon and Santa Rosa. In 1919, his only son, William Randolph Hearst, inherited the land from his mother, Phoebe Apperson Hearst. By then the ranch had grown to encompass 250,000 acres.

Originally known as “Camp Hill,” its wilderness offered a place for family members and friends to “rough it” on camping trips. Despite elaborate arrangements with separate sleeping and dining tents, Hearst envisioned more comfortable accommodations. His simple instructions to famed San Francisco architect Julia Morgan in 1919: “Miss Morgan, we are tired of camping out in the open at the ranch in San Simeon and I would like to build a little something.”

Hearst and Morgan’s collaboration was destined to become one of the world’s greatest showplaces. As they were planning and constructing his dream home, Hearst renamed the rocky perch from which it arose, “La Cuesta Encantada” – The Enchanted Hill. By 1947, Hearst and Morgan had created an estate of 165 rooms and 127 acres of gardens, terraces, pools, and walkways.

The estate’s magnificent main house, “Casa Grande,” and three guest houses are of Mediterranean Revival style, while the imposing towers of Casa Grande were inspired by a Spanish cathedral. The blending of the architectural style with the surrounding land and Hearst’s superb European and Mediterranean art collection was so seamless that world-renowned architectural historian, Lord John Julius Norwich, was moved to say that “Hearst Castle is a palace in every sense of the word.”

Beautiful works of art from his collection give a glimpse of the treasures seen on tour. A display dedicated to Mr. Hearst’s career in media, publishing, and politics features an audio recording of a political address he made. A short video highlights the film career of Marion Davies.

Young visitors to the Castle can explore the exhibit with a free Treasure Hunt map provided at the desk inside the exhibit doors. A prize is awarded to participants.

Children and adults alike will enjoy the “touch gallery” – a display of tiles, marble, textiles, and other materials used in the art and architecture of the Castle that allows guests to experience the collection in a tactile way not allowed on tour.

Grand Rooms Tour -gather in the grand social rooms of Casa Grande—the largest house at Hearst Castle—to experience what it was like to be a guest at this hilltop retreat. Recommended for first-time visitors, this tour also has the fewest stairs to climb.

Upstairs Suites Tour – explore the upper floors of Casa Grande—the formal name for the main house—and ascend its winding staircases to see how media mogul William Randolph Hearst and his esteemed guests lived at the Castle.

Cottages & Kitchen Tour – discover two very different parts of this fascinating historic attraction: some of the most personal rooms of the property and some of its most practical ones, including Hearst’s beloved Casa del Mar and the industrial-sized kitchen.

Accessibility-designed tours are available. Night tours offered during certain seasons. All tours have durations of 1 hour and 45 minutes, which includes the bus ride to and from the castle.

Call (800) 444-4445 or visit hearstcastle.org for more information, including schedules and rates. The Visitors Center is open daily at 9 a.m. and includes a gift shop, various dining options, exhibits and more.