It’s simple and laid back at Ada’s Fish House 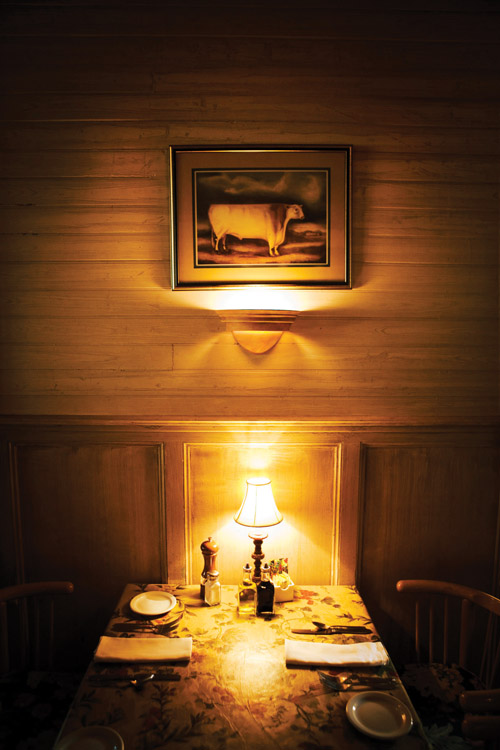 Visit 20 year-old steakhouse located in the heart of Templeton

Do unto others as you would have them do unto you. Boiled down, this old adage is the simmering marinade which flavors every decision at McPhee’s Grill, the stalwart 20 year-old steakhouse at the heart of Templeton’s historic downtown. It’s a cooking credo you can sense almost immediately when you speak to Ian McPhee, the chef and owner, because of the way his eyes light up and his voice surges as he describes the fare at his restaurant.

This is clearly a man who cooks to please his own inner critic and, as many will attest, especially for his guests. When McPhee makes a pork chop, for instance, it is no mere, run-of-the-mill, everyday pork chop. His version—a flagship dish that has become famous in the area—is a nearly one-pound, double-cut pork chop which he expertly cuts from a whole, bone-in pork roast loin that has been cured in brown sugar and roasted until near-doneness. He then finishes it to-order on the oak-fired barbecue and slathers it with a savory ancho chili apricot jam glaze. After eating this, there is no other pork chop.

“I don’t know how it got famous, but all the food I cook here is based on what I like and what I like to eat—not necessarily on what everyone else is doing,” McPhee explains simply, adding that his family (his wife, June, is the pastry chef and all of their children, Max, Abby and Holly, work in the restaurant) follows suit. “From the food to the service, it’s what we want and how we would want it if we were the guests.”

Because of that unswerving philosophy, McPhee chooses only high quality, locally sourced, fresh ingredients for his dishes; he offers only locally made beers and wines and he takes special care in training his staff in the subtle art of superb food service.

His high personal standards also inform what McPhee’s Grill is best known for: its steak. McPhee explains that he selects only the best cuts of beef, aged for five to six weeks for maximum tenderness and flavor, and cooks them over an oak pit for 15-20 minutes to allow enough time for them to absorb the smoke flavor of the local oak. “It’s better this way – aged, hand-cut, thick, and prepared with time and care on the barbeque,” McPhee says.

In the end, McPhee’s integrity has served him well. His restaurant is commonly cited as one of the best on the Central Coast, and was recently named in Sunset Magazine’s article about the “The West’s best unsung BBQ town.” But perhaps the best reward of all is the one he gives himself by remaining true to his own ideals. “I look forward to coming to work; it’s part of my life and I love it. I love everything from cutting the meat to talking to the customers to running the business. I always have a good time doing it.”