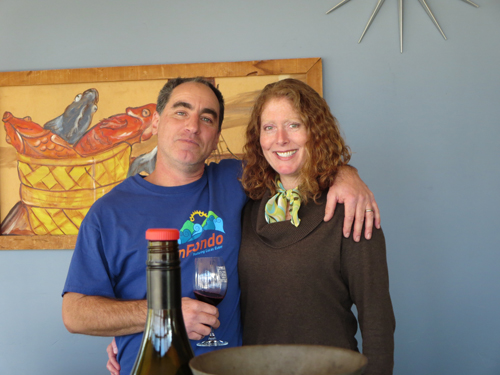 Victor and Jenni Abascal are passionate about Paso Robles wines and invite visitors to stop by their Vines on the Marycrest tasting room.

Vines on the Marycrest

William Shakespeare’s famous line in Hamlet, “get thee to a nunnery!” certainly had nothing to do with wine.  However, in the case of Victor Abascal, it had everything to do with wine, because Victor first went (in a manner of speaking) to the nunnery…and ended up with a winery.

In the early 1990’s, Victor (who was about 30 and already 12 years into a successful career in the music industry) saw an article in Wine Spectator Magazine. As it turned out this was his epiphany life changing moment. The article intrigued him so much that Victor knew someday he would be a winemaker. He began to read, study and taste wine and, being single, Victor had the flexibility to start traveling to the great wine regions of Europe and California to learn about wine and train his pallet and taste. As they say, the rest is history.

Becoming totally obsessed by wine and the concept of blending art and science to create the liquid nectar, in his spare time Victor began experimenting with winemaking for fun and for friends. He would take a batch of grapes and see how many different “types” of wines he could make from the same juice.

Living in Culver City, Victor used to ride his dirt bike around the oil fields above his father’s home. He discovered a wonderfully secluded patch of land, close to a hole in a fence on the property of Marycrest Manor, a Catholic retirement home, gained access to the oil fields and thought this location would be perfect for him to experiment in growing some grape vines. The area was adjacent to a beautifully planted field of mustard.  Victor planted about 150 vines on a quarter acre, tended to them with love, carrying 125 gallons of water every day after work to nurture his fledgling vines. Since he couldn’t see anyone from his little vineyard, he figured nobody could see him.

All was going well until one day when he unexpectedly received a summons from the owners of the property. Apparently, Victor’s name was on some grape vines and the Nuns were able to contact him through that information. Knowingly, Victor had planted his vines on the property of Marycrest, but never thought they would be discovered, and when they were, the Nuns (thinking the plants were something other than grape vines, and most likely illegal), were NOT happy!

The Nuns ordered Victor to remove the vines immediately. After explaining that they were NOT marijuana, and that he didn’t realize he was on their property, that he simply wanted to try his hand at growing grape vines and making wine, he was suddenly dismissed. As there was no further discussion, he continued to tend to his vines. As the vines flourished, they were sometimes visited by some of the residents of Marycrest, who hiked up the hill to see the lovely little plants.

Time passed and once again, Victor was summoned by the head Nun. He was instructed to remove the vines or Marycrest’s insurance would be cancelled. He pleaded with her to allow the vines to remain a few more months, until winter, when they would be dormant or they would die. Again, he was told to leave, but was permitted to keep his plants with certain stipulations. Winter came and Victor then moved his precious vines to the nearby oil fields (also planted without permission) where he built trellises and continued his “experimentation.”

At this time Victor’s life was taking off – his career in the music industry (as a sound mixer) was flourishing, he was tending his “vineyard” and, in 2002, met the woman who became the love of his life, Jenni, and married her 9 months later. Knowing he would never truly be happy until he had a career making wine, he started looking for property.

During this period Jenni became pregnant with their first child.  Then in 2004, with a 1 year old and another on the way, Victor announced to his bride that he was purchasing 26 acres in Paso Robles so he could farm grapes and make wine. With a smile and twinkle in his eyes he simply told her “don’t worry, I’ll make it work.”  So, taking a (giant) leap of faith, Jenni quit her job, and up to Paso Robles they went with two small children and a dream.

A vineyard & winery is born

And so, the future vineyard and winery, Vines on the Marycrest was born. An apt name in recognition of where Victor initially began growing his first vines…where his roots in vineyard tending and winemaking began. The property Victor purchased was not primarily a vineyard – it was an almond orchard with some Old Zin vines located in the back of the land. The orchard had to be cleared, graded and planted with vines, which Victor did…by himself!

Quitting his job in the music industry, Victor went to work for Castoro Cellars at $10 per hour…to learn the wine business literally from the ground up, while painstakingly starting to prepare his land for growing grapes and making wine. As his vineyard and winery progressed, Victor again went back to the music industry, splitting his time between Los Angeles and Paso Robles, commuting 600 miles round trip, and sleeping at his sister’s house for a few years, and then on an air mattress in his office at the sound studio.

Talk about a labor of love. Victor was bound and determined to make this work, and with Jenni at his side, encouraging him to do so, he did just that. 2005 saw his first release:  980 cases…and Vines on the Marycrest was off and running. And so was Victor – he kept commuting, leaving Jenni to run the winery, take care of the children, and watch over his dream.

Hard work, a vision, and a partner who supported and believed in him led Victor to realize his dream.  Finally able to quit his job (in 2013), Victor is now devoted full time to Vines on the Marycrest.

Currently, production is about 1200 cases and growing, spread among approximately eight different wines.  Victor produces 100% varietals such as Viognier, Grenache, Mouvedre, Petite Sirah and Syrah, and also wonderful Rhone style blends with names such as Round Midnight, Satin Doll and My Generation…names taken from music industry hit recordings.

Loyal wine club members are treated to semi annual pick up parties, with musical entertainment.  Visit the tasting room and, as you are sipping Victor’s creations, you are likely to be treated to a variety of music streaming through his state of the art surround system which he designed and installed himself, as he did and does with everything connected to the winery.

If you are lucky, you will visit Vines on the Marycrest when they are not packed with their cult followers, and have an opportunity to sit down with him as he relates his story to you.  The wines are more than a work of love and a piece of art.  They ARE Victor.  Every bottle, every drop of wine, reflects Victor’s love of the land, his love of the vines, and especially, the love of his life.

Victor’s philosophy is simple:  Begin with the end in mind, but just because you “can” doesn’t mean you “should.” When you sip any of these wines, Victor’s passion and personality, his labor and love and commitment comes through. Vines on the Marycrest is one man’s dream realized and being lived, after starting on that hillside almost 20 years ago.

Get thee to a winery…

Vines on the Marycrest is located at 5076 Mustard Creek Road in Paso Robles and is open Thursday through Monday from 11:00 a.m.-5 p.m. For more information, call (805) 237-0378 or visit vinesonthemarycrest.com.