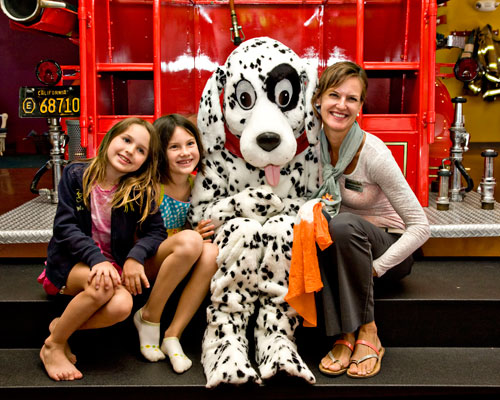 The Paso Robles Children’s Museum in downtown Paso Robles opened its doors in 2007, and has since had over 100,000 visitors.  The museum’s historic home was once the volunteer firehouse serving Paso Robles, and when the Children’s Museum moved into the space its theme was designed to reflect the building’s history.  The building still resembles a classic firehouse, and the fireman’s pole is still located in the main area of the museum.

The building, which was built in 1940, underwent construction for 5 years to become the museum space that it is today.  However, the building still maintains much of the feel of a firehouse, from the high ceilings to the large windows in the front where the doors for the fire trucks used to open.  Some of the exhibits embrace the building’s history as well, and a fire truck near the entrance is available for children to climb on and explore.

The museum, designed to help children “learn through play,” with the focus being on the early years of childhood.  Parents are encouraged to accompany their children in exploring the museum, but it is also set up so that the children can play independently.

A “Creation Station” on the second floor features a new activity each day, so frequent museum visitors can expect to find new arts and crafts activities each visit.  Exhibits include Grape Stomp, The Market Area, Newton’s Playhouse, Physical Science Corner and the Theater Area.

Local school groups are encouraged to visit the museum on field trips, and a special time before the museum opens has been carved out for them. These groups participate in lessons on topics such as the food pyramid, the weather, metamorphosis and the solar system, depending on the ages of the students.  Over 9,000 students have attended these programs and their visits were paid for through grants received by the museum.

The success of The Paso Robles Children’s Museum is a reflection of the support that it has received from the community of Paso Robles.  Over $1,000,000 was raised for the conversion of the building and the installation of the exhibits.  One wall of the museum is dedicated to those who have donated to help fund the museum’s programs; the museum’s budget is made up completely of money raised through donations and grants.