By Visitors Guide
77 Views
Posted In
Wineries
Tagged as
Related 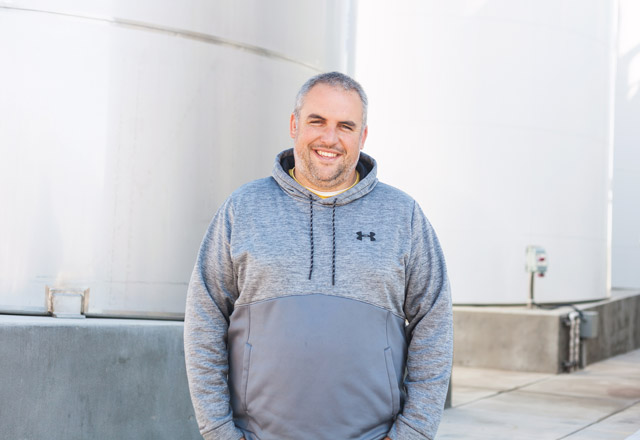 Over the last few years Tin City in Paso Robles. has rapidly become the go-to place for beer, wine, cider, and food. It’s like an adult Disneyland, but family-friendly as well. We wanted to find out more about this spot so I got in touch with Andrew Jones, who had the first alcohol-related business in Tin City

How long have you and the businesses you’re involved with been in the Tin City area?

I moved over in 2012. About 40% of the complex hadn’t even been built yet.  Field Recordings was first producer of alcohol in the neighborhood. Honestly, I moved down here because it was a nice quiet place to have a low-profile winery. How things have changed.

When did the name, Tin City, come about?

The name was brought up by Brian Terizzi (owner at Giornata Wines and ETTO Pastificio). He was talking to Pebble Smith one day and was telling Pebble how he was moving his operation down to the industrial complex off Marquita. Pebble responded to that by commenting “you’re moving down to that old tin city too” or something along those lines. I don’t remember exactly the quote.

Were you one of the first wine/ beer/ cider related businesses in Tin City?

Was “Tin City”, as it is today, the plan from the beginning?

Was not my plan. Didn’t think people would want to come down here. I didn’t even have a tasting room in the original plan. Barrelhouse changed the retail side of things. I opted to open a tasting room after we would get people dropping in once they saw the barrels sitting out. They wanted to taste some wine before getting beers.

I ask this because I’ve seen more non-wine/ beer related businesses leave Tin City, so are you aware of anything in the pipeline that you can fill us in on?

Mike English is dedicating all the buildings to hospitality-oriented business’ as people’s leases term out.  A bunch of things are rumored to be coming in but I doubt you’ll see anything really pop up until summer of 2020.

As a collective group, what kind of events do you guys do (example: Christmas Forklift Parade)?

We are keeping it simple to start off. Just the August Block Party and the Forklift Parade.  With a lot of producers in the area, it’s tough to organize more than that with the resources we have at the moment.

What year did the first winery/ brewery show up in the area?

When this land was first developed was it intended to be for local industry?

Was just a real estate investment for Mike to my knowledge.  The barrelhouse building was actually his first attempt to draw a winery in.  He had started setting it up to be a co-op winery but in the end that wasn’t a good fit.

If so, what made it switch over to becoming an adult Disneyland (wine, beer, cider, food)?

I think we just got to a critical mass of cool artisan producers. Ended up being a natural progression.

What’s the long-term vision for this area?

Personally, I just want us to keep evolving.  Make it a timeless destination.  We have some good momentum, but we need to stay the course and continue taking things to the next level.

Are you worried about parking issues in the area and do the powers that be have any plans for that?

Already being addressed.  We have a 200+ space parking lot opening in late 2020 once Daniel’s Woodland is all moved out. Their supply yard is being converted to a parking lot and storage facility.

I’ve often heard and read that when people visit wine country, they want the whole vineyard vibe, Tin City does not have that so what is the big draw? How have you folks been able to get people in there?

The difference with Tin City is people actually make the wine here. It isn’t a downtown tasting room which is essentially a bottle shop. No wine is made there. You drive into Tin City and you’re dodging forklifts while looking for parking.

How do you think “Tin City” has impacted the Paso Robles wine scene?

It’s the only new area for wine tasting in years for the area. It has gotten so hard and expensive to build a winery on one of the main roads, we probably won’t see another one pop up again for a while. We will have brand changes and renovations, but no actual new projects.

Is there anything missing from Tin City that you would like to see added at some point?

More cool stuff. Can never be content with what you have. If it isn’t evolving, its dying.