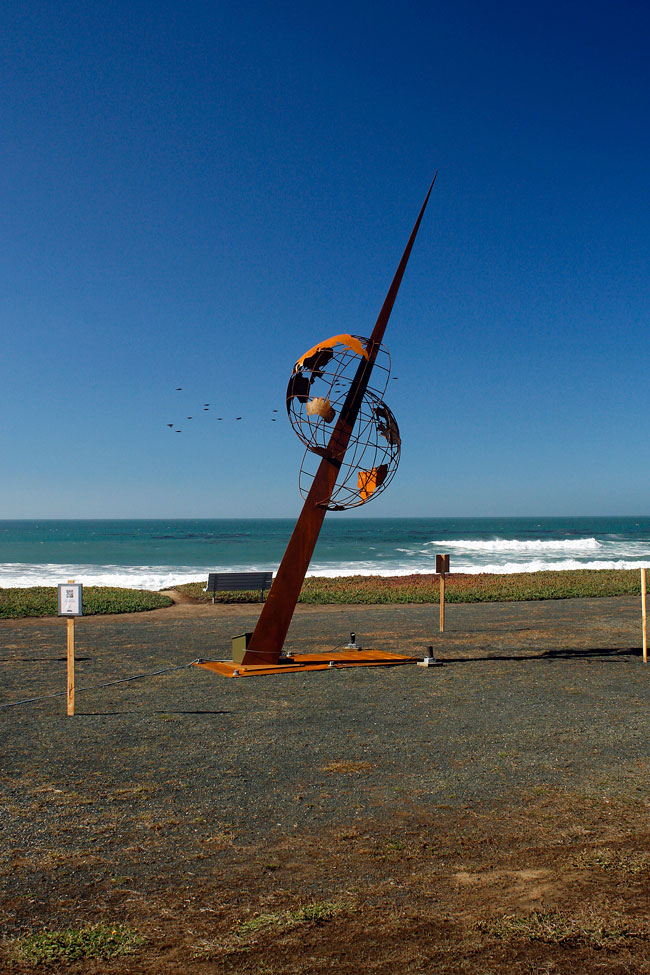 Shift – A Change in Direction

—Artists see things differently than the rest of us and their contributions often challenge us to make a change in direction. The 1200 pound, three-story metal sculpture, titled Shift, standing at the edge of the Pacific Ocean in San Simeon brings such a challenge. Depicting the earth shifted into two halves along its axis, the sculpture urges the viewer to think about the significance of a world splitting and shifting apart.

What do we feel when we see the earth has shifted and split along its axis? Does it tell a story of the condition of the world today or is it a portent of things to come? Spend some time studying it. Walk all around and view it from every perspective. Perhaps you will ask yourself what you could do to bring the two halves back into alignment.

Those are exactly the thoughts that the creators of the sculpture want you to think. Designer Warren Hamrick of Shell Beach sees the piece being “born out of climate” issues and “how politics relates to the climate and earth’s future.” Hamrick calls our climate situation a “civilizational pandemic.” Wanting to put a positive spin on things he and seven of his friends began to discuss their frustration with how the world is shifting apart driven by politics, inequality and violence. The idea for an artistic expression took shape.

Hamrick’s wife Kathy views Shift as a calling and realization that out of pain and brokenness can come new life and growth. “Life wants to go forward” and “she will recharge and recover from the abuse.” The question is whether we will.

Rob Foster a metalworker and welder from Atascadero created the metal sculpture along with builder Neal Portlock of Cambria. Others involved in the project are builder Charlie Main and his wife Terri of Shell Beach and Darcy Cleome of Cambria. Along with Warren and Kathy Hamrick, they formed “The Global Shift” and a corresponding website.

The sculpture is meant to invite people to reflect on our world and unite as we are all experiencing the Shift together. The group wants to acknowledge that as a society we are shifting and that there is a recognition that human actions are fueling the global warming that is causing climate change. They also feel that the conversation about climate change is shifting and that the public is starting to listen to those who are the stewards of nature and are striving to bring everything back in balance. The artistic team feels the conversation about climate change is getting more serious and urgent than it has ever been. In their view, the earth has not yet reached the tipping point of no return. The artists invite the public to experience their Shift and be part of the climate solution.

Shift is on display at the Cavalier Oceanside Resort, 9415 Hearst Drive, San Simeon. The creators are thankful to resort owner Michael Hanchett for providing the space for the sculpture. For more information about Shift, visit the Global Shift website at globalshift.info.