By Visitors Guide
1199 Views
Posted In
News
Tagged as
Related 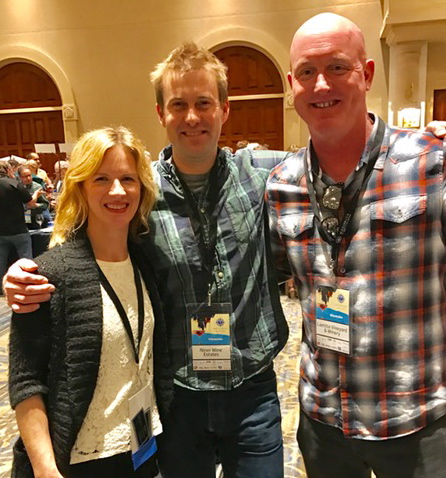 –The heady, beguiling and poetic World of Pinot Noir came to Santa Barbara as Bacara Resort and Spa transformed itself into Pinot-ville. Some 3,000 pinot aficionados descended on this beachfront resort to sip and savor world class wines over the weekend of March 3 and 4.

Yes, there were pinots from Chile, Spain Italy, Austria, New Zealand and France, but very limited offerings. As usual there was heavy representation of California wines; in fact, this year there were close to 100 wineries from the Central Coast and over 50 from Sonoma Valley.

San Luis Obispo County was well represented by some 20 wineries of which seven were from Paso Robles, a region not known for pinot noir. 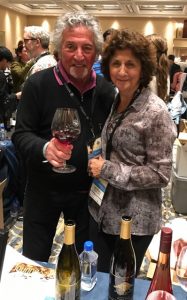 Marc Goldberg and Maggie D’Ambrosia of Windward Vineyards and Winery

From the exclusively pinot house of Windward, proprietors Marc Goldberg and Maggie D’Ambrosia poured the 2014 Monopole, a double Gold Winner at the San Francisco International Competition and a 2015 Vin Gris de Pinot Noir.

Known for his Cabernet Sauvignon wines, RN Estate’s Roger Nicholas has been on the pinot bandwagon for a few years. He is very much hands on, to the point that some of the fruit sourced from Santa Maria Valley is grown according to his specifications.

“We are so into pinot,” said Nicholas’ partner Claire Westaway pouring the 2013 Fiddlestix from the noted Santa Rita Hills vineyard. 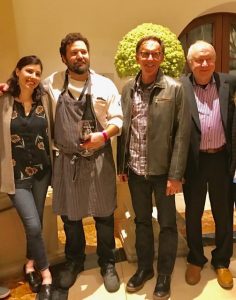 Jennifer Hogue, co-proprietor of TH Estates was a first-timer at WOPN this year. She offered the Decroux, a small 500-case production made from Santa Rita Hills and from Talley’s noted Rosemary Vineyard in Edna Valley.

Niner Wine Estate’s team of Andy Niner and the pinot project winemaker Molly Bohlman poured the wine from Edna Valley’s Jasperson Ranch vineyard that was purchased by the Niner family in 2011.

Collins admitted that this dinner posed a challenge. “Most dinners start with a white wine,” he said. “This is trickier with all pinots.”

The elaborate six-course dinner showcased his culinary artistry. However, it was a gourmet overkill, with so much food — starting with fennel-rubbed pork, followed by pan roasted sea scallops continuing with braised octopus, cauliflower and egg flan, grilled quail and finishing with smoked beef cheeks. No wonder there was no dessert on the menu. 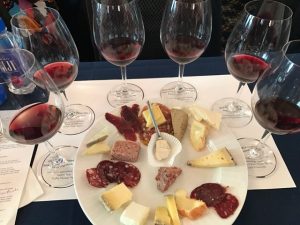 A native of Burgundy, Baileyana’s winemaker Christian Roguenant introduced his 2014 S-Bar pinot noir served with the quail course. “The S-Bar stands for super bad ass reserve,” explained Roguenant of the French-inspired wine. Crafted from three different clones, the small production is limited to club members only.

The Santa Barbara County offered a plethora of wines, so it was a tough call to go through them all. I started with Richard Sanford, regarded as the region’s pioneer when he planted pinot vineyards at his eponymous winery in the 1970s in the now famous Santa Rita Hills appellation. He sold the winery in the early 2000, then started Alma Rosa Winery in Buellton.

“It’s interesting that enough vineyards are coming from distinctive regions to develop regional identity,” said Sanford, one of the original participants of WOPN.

And how are they distinctive? 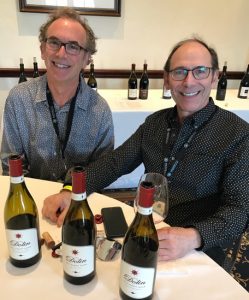 “The Russian River Valley is cherry-like while both Santa Lucia Highlands and Santa Maria are jammy, Santa Rita Hills has raspberry character and Oregon is savage,” Sanford noted. “It’s a great time to be a pinot lover.”

Other wines of interest from Santa Barbara County included the highly sought after Sea Smoke; Native, a small 250-case production of biodynamic wine made by James Ontiveros from his family’s Rancho Ontiveros vineyard in Santa Maria; and Kita Wines crafted by Tara Gomez, the first Native American female winemaker producing wines for the Chumash Indian-owned winery in Santa Ynez Valley.

There was a touch of pink with a selection of dozen wines at the Rosé kick-off lunch: among them a delightful rosé of pinot gris from Oregon’s Anne Aime; sizzling with bracing acidity, Alta Langa rosé from Banfi Piemonti; and a fragrant one crafted by Kathy Joseph, owner of Santa Rita Hills’ famed Fiddlestix vineyard.

“These wines are meant to be easy and approachable, but we take them seriously,” mused Joseph, raising her glass to “pink power.”

The Saturday sparkling brunch offered comfort food menu of chicken and waffles along with baked oysters, washed down with pinot-based bubblies from Bollinger, Argyle, Riverbench and Flying Goat Cellars.

At $450 per head, Grand Cru Burgundies were served at the pricey Vintage Burgundy with the Guild of Sommeliers soiree while Premier Cru wines starred at the $350 per person Louis Latour dinner.

On a more affordable note ($120 per head), the Hitching Post Retrospective dinner with chef and winemaker Frank Ostini and his partner Gray Hartley featured 11 vintages of the Hitching Post pinot noir collection dating back to 1991.

The owners of the winery and its namesake iconic Buellton barbecue restaurant featured prominently in the multi-award winning film, “Sideways,” revealed they started their wine project in a hippie van carting merlot grapes and crushing in whiskey barrels.

“But we don’t want to talk about merlot tonight,” mused Ostini, now a pure pinot man.