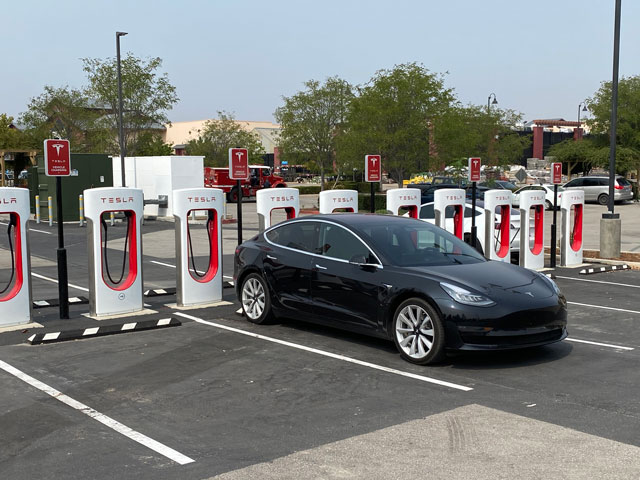 Tesla installed 28 Superchargers that are available 24 hours a day, 7 days a week. They can fully recharge a Tesla electric vehicle in less than an hour with charging speeds up to 250kW. The current charging fee is set at 28-cents per kilowatt.

Tesla owner Sofiaan Fravel on Saturday said the new Paso Robles Superchargers were re-charging his Telsa at speeds of over 1,000 miles an hour,

The charging stations are located in front of Bed Bath and Beyond and TJ Max. Other nearby stores include Starbucks, Subway sandwiches, The Slice pizza parlor, and Lowe’s home improvement store.

There are over a dozen lower-powered Tesla destination chargers in Paso Robles. Tesla previously installed Superchargers in Atascadero and San Luis Obispo.

Tesla has more than 12,000 Superchargers across North America, Europe, and Asia and the network continues to grow daily: more than 99% of the U.S. population is covered by the network, Tesla reports.

A recent report said almost 50-percent of Tesla Model 3s sold in the US were registered to California owners.

New #V3 #Tesla supercharger in #PasoRobles is awesome! I’ve only been here 8 minutes and added 100 miles of range! 😍Thanks @elonmusk & @Tesla for ramping up superchargers so fast! pic.twitter.com/oESv9P85eA