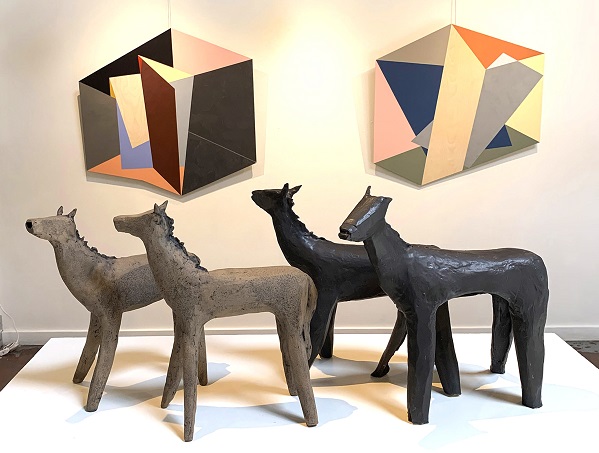 —Studios on the Park in downtown Paso Robles is continuing its series of contemporary art exhibitions in the main Atrium Gallery with a new showing of regional sculpture and pottery called, The Shape of Human Expression: Sculpture and Pottery of the Central Coast.

Three-dimensional art in the form of sculpture and pottery is one of the oldest forms of human expression. As standards across ancient civilizations ranging from Africa and Europe to Asia and Latin America, these art forms have been foundational to world culture. In contemporary times, sculpture and pottery works have been informed by dynamic new turns in their use of materials, forms, and complementary elements.

The August show, organized in partnership with guest curator Tom Peck, will be open for public viewing during Studios on the Park’s newly adjusted retail business hours: Monday, Wednesday, Thursday and Sunday from noon – 4:00 p.m., Friday and Saturday from noon – 6:00 p.m.; closed on Tuesday. The exhibit runs from July 28 – August 31.

Until now, sculpture and pottery have been relatively rare in Studios’ Atrium Gallery exhibitions. With this show and its impressive array of creators and contents, the downtown art center seeks to establish new energy and interest to support a forward-going series of comparable shows featuring multi-dimensional works.

The talented group of presenting artists to be featured in August in the current complement of offerings sets the stage for such work. According to Studios on the Park’s Artistic Director, Henry A. J. Ramos, “Each of the featured artists presents works that are emblematic of the best art the California Central Coast has to offer in the early 21st century.”

Since its reopening, following nearly four months of closure owing to the COVID-19 pandemic, Studios on the Park has employed new safety procedures and requested that visitors wear protective face masks and practice social distancing.

Studios on the Park, which supports local artists, arts education, and the creative process, is located at 1130 Pine Street in Downtown Paso Robles. Groups of larger than six individuals are encouraged to call Studios staff (805) 238-9800 in advance to coordinate their visits in accordance with maximizing public health and safety. For more information visit studiosonthepark.org.