By Visitors Guide
865 Views
Posted In
News
Tagged as
Related 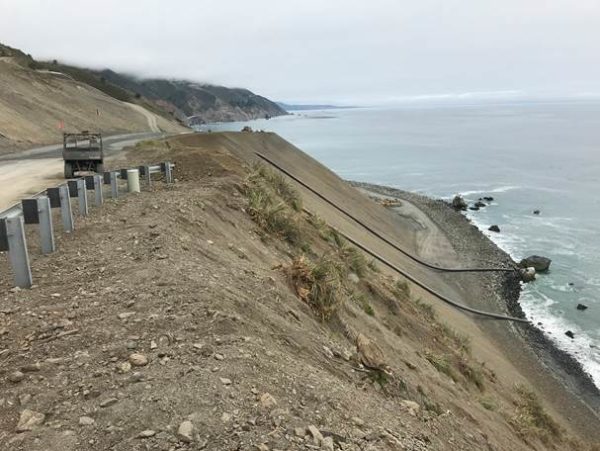 –Caltrans has announced that State Route 1 at Mud Creek along the southern Big Sur Coast is scheduled to re-open by Friday, July 20 at 11 a.m.

A ribbon-cutting ceremony for the opening will take place at the Ragged Point Inn at that time.

The re-opening of this section of State Route 1 follows a massive landslide on May 20, 2017 which resulted in the movement of six million cubic yards of material and 50 acres of displaced land, including the creation of 2,400 feet of new shoreline. A quarter-mile section of roadway was lost due to this landslide.

“We’re very pleased to share this long-awaited news with everyone who travels along this international destination the many businesses that benefit from the coast highway,” said Caltrans Director Laurie Berman. “Mud Creek is the last closure point so travelers will be able to take Highway 1 all the way through Big Sur for the first time in 18 months.

This section of State Route 1 was built across the slide material buttressed with a series of embankments and compacted soil and using protective features including berms, rocks, netting, culverts and other stabilizing material.

The rebuilding effort included construction seven days a week, dawn to dusk for the past year and was completed two months ahead of our initial mid-September estimate.

The contractor for this $54 million emergency project was John Madonna Construction of San Luis Obispo, CA.

For traffic updates on all state highways in San Luis Obispo County, motorists may call Caltrans District 5 Public Affairs at (805) 549-3318 or visit:http://www.dot.ca.gov/dist05/road_information.htm.