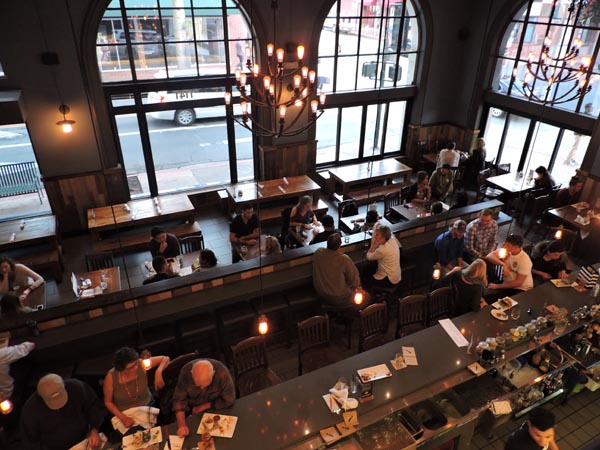 A view from the restaurant’s second story. Photography by Skye Pratt.

–The original idea behind Eureka! was, “approachable gourmet.” Since their original location in Redlands Calif., Eureka! has stayed true to their promise of consistently providing fresh, epicurean creations whilst allowing each of the 17 individual locations to adapt and evolve.

Some things are just meant to be 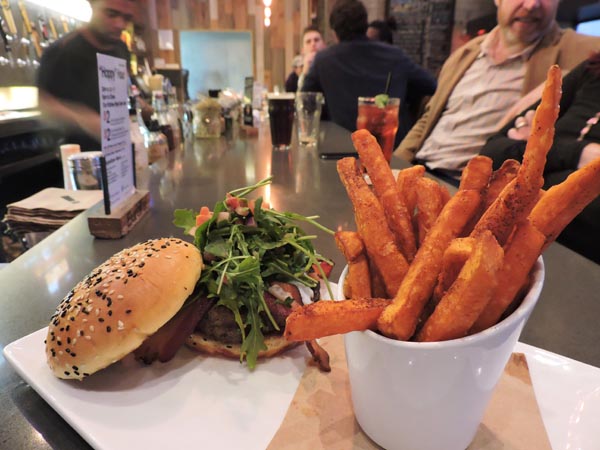 The Fresno Fig Burger is one of their most popular burgers, paired here with sweet potato fries.

San Luis Obispo turned out to be a perfect fit for the unique bar and eatery; it’s a favorite of tourists and locals alike. Frederick says that San Luis Obispo is what’s known as a, “discovery market,” which typically describes a town or city, often near a university, sometimes with a blossoming tech scene, where new, fresh ideas are tried out. “It’s kinda fitting with our name being, ‘Eureka!’” said Frederick.

Diners and drinkers will find quite the bang for their buck at Eureka!. Unlike many upscale establishments, it serves up handcrafted, adventurous, gourmet offerings at approachable prices, all without any stuck-up attitude. The restaurant has an upbeat yet casual atmosphere with handpicked music, televised sports, and fun weekly events.

Eureka first began in the depths of the recession in 2009, so the experience that they crafted had to be value-driven from the get-go. They describe the Eureka experience as “eatertainment.”

Eureka has a rotating menu, but some favorites are likely never budging. One of their most popular burgers is their Fresno Fig Burger, topped with fig marmalade, melted goat cheese, bacon, tomato, red onion, fresh arugula and finished with a spicy porter mustard. “It’s our most popular burger,” says General Manager Jeremy Stemen. Try the Truffle Cheese Fries, which come topped with truffle salt, cheese, green onion, and a white truffle cheese sauce so divine you’ll dream about it later. “It’s our most requested sauce,” said Stemen. 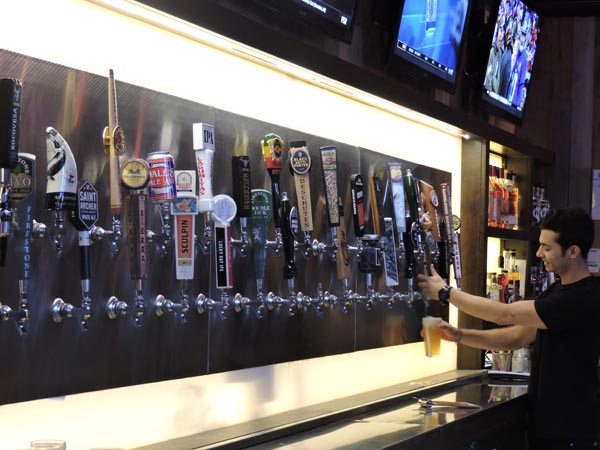 Bartender Cameron Alarco pours a beer from one of the many taps.

A trip behind the scenes with Stemen revealed a stash of small-production liquors. The kinda places that Eureka! sources from produce sometimes as little as 20,000 bottles per year – compare that with super producers such as Jack Daniels, who is pumping out 50,000 bottles per day. They are liquors you are not likely to find anywhere else, some are even specially made for Eureka!. The beer and wine list also showcases small-batch breweries and wineries, and at the San Luis Obispo location, much of the wine and beer available is made right here in SLO County.