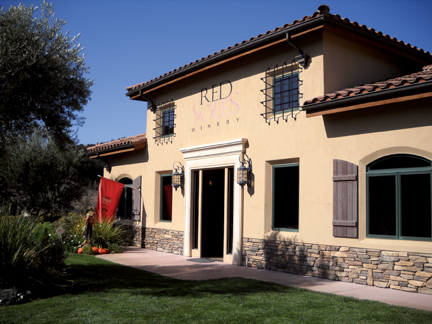 Red Soles’ inviting tasting bar is located in the production area for the winery. Visitors are surrounded by barrels and shining stainless steel fermenting tanks as they taste through the Red Soles tasting menu, and they quickly see that this is an active, working winery. Clear industrial-style rolling doors separate the tasting area from the winemaking area.

Randy says that Red Soles is still mostly about farming, and that they think of their wines as a way to showcase their grapes to prospective buyers. This approach seems to be working; according to Randy Red Soles is best known for their Cabernet Sauvignon, and every Cabernet they have made so far is a gold medal winner.
Before settling is Paso Robles Randy and Cheryl lived all over the world. Randy’s work as a high-tech CEO took them to many places, and they spent a number of years in Switzerland, Spain, Napa, the San Francisco Bay Area and Boston. Their interest in wine was influenced by the time they spent in some of the world’s best wine regions, and when they started looking for a place to settle down Paso Robles had a draw for them.

The Phillipses also had some family connections in Paso Robles: Cheryl’s dad lives on 40 acres just a few miles from Red Soles and Randy’s grandparents were a part of nearby Adelaida’s now-defunct quicksilver mining business. 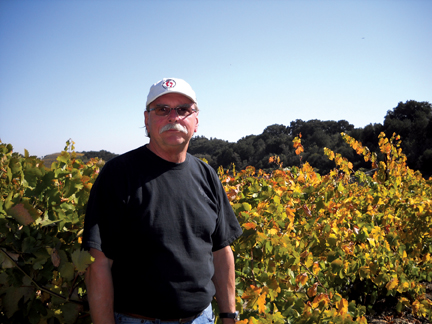 Randy and Cheryl purchased 150 acres in San Miguel, which is just north of Paso Robles, in 1987 and then bought the 100-acre property in Paso Robles in 1991. The Paso Robles property now houses the winery and tasting room. For twenty years they grew and sold their grapes, and watched as the wine industry grew up around them. Randy recalls that when they started growing grapes in the area there were only about 6000 acres of grapes and just 12 wineries in Paso Robles. The Paso Robles AVA now has over 26,000 acres of vineyards planted.

Randy and Cheryl are heavily involved in the day-to-day operations of the grape growing, as well as the winemaking side of the business. Randy says, “I call myself the winegrower,” and says that he is responsible for the daily duties at the winery. Randy works with consulting winemaker Amy Butler to mine her expertise. Amy Butler is an experienced winemaker in Paso Robles, and has her own label, Ranchero Cellars. After singing her praises—“She has a great palate, and is very knowledgeable in all aspects of winemaking”—Randy says, “I drink a lot of her wine.”

Randy describes Red Soles as a partnership between himself and Cheryl. Cheryl is the weighmaster at Red Soles, and is busy during harvest weighing grapes. Randy says of Cheryl “She weighs every bin that comes in” and that she runs the business side of Red Soles. Randy and Cheryl are often in the tasting room, and Randy is there every Saturday and Sunday from 2 – 5pm.

Even with their involvement in the winery, Randy says, “We are farmers first.” For every 30 tons that they make into Red Soles wine, Randy says that they sell 1000-1500 tons of grapes. Randy likens the Red Soles tasting room to a “modern day fruit stand,” and says that they “use the winery as a marketing tool to sell their grapes.” Randy and Cheryl invite visitors to come in and taste the wine that Randy calls “the expression of our fruit from our ranches.”

The Red Soles tasting room is open daily from 11am – 5pm at 3230 Oakdale Road in Paso Robles. Call (805) 226-9898 or visit their website at www.redsoleswinery.com for more information.