How to speak ‘wine’

Try a vacation rental in Cambria 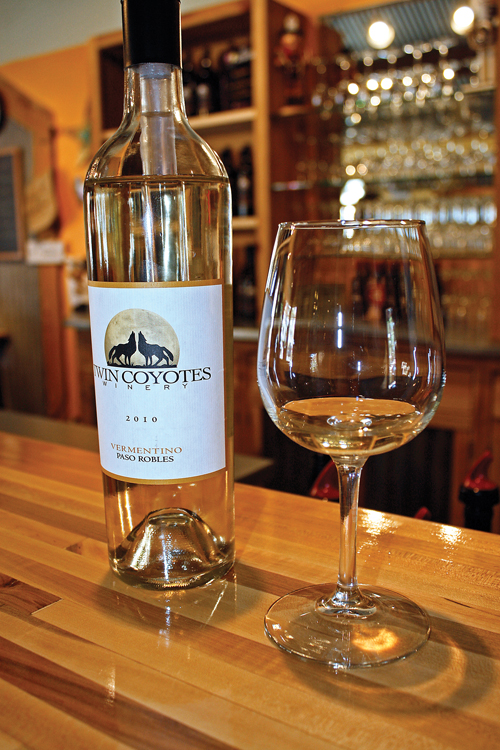 Howl at the moon. That’s the motto of twin brothers Steve and Stu Thompson of Twin Coyotes Winery. You will howl when you sample their Vermentino wine. This Silver Medal Winner at the 2011 San Francisco Chronicle Wine Competition is grown on their 32 acre Coyote Moon Vineyard in Paso Robles.

Steve and his wife bought the vineyard in 2007 and two years later brother Stu joined Steve in starting the winery. While most of the farming and winemaking operation is in Paso Robles, in October of 2012 they opened their tasting room in the complex called The Shops at the Garden Shed in the East Village of Cambria.

The winery produces 600 cases a year and is growing. Both red and white grapes are grown including the aforementioned Vermentino, an aromatic, fragrant white that is light and crisp. Vermentino is an Italian grape and Twin Coyotes’ vineyard manager Neal Roberts, started it by grafting it onto existing Sauvignon Blanc vines. Roberts, who is well known as the owner of Paso Robles Labor Contracting and Clavo Cellars, is SIP Certified (Sustainable In Practice). Twin Coyotes believes in sustainability and good stewardship of the land to preserve it for future generations. They use healthy biological processes rather than relying on chemical inputs. This not only protects the environment but also the people working with it.

“We have owl boxes and the owls help us keep control over rodents like gophers and squirrels,” Thompson commented. Squirrels, which abound in this area, are very detrimental because they dig tunnels through the vineyard, chew the grapes, and even chew through the irrigation lines. Red Tail and Red Shouldered hawks also help to keep the squirrel population down.

Other varietals grown are Sauvignon Blanc, Grenache Blanc, Cabernet Sauvignon, Tempranillo, and Petit Sirah, their flagship wine, as well as Verdejo, a Spanish grape. “We get Chardonnay and Primitivo from vineyards on the west side of Paso Robles and in the Templeton Gap,” Thompson said.

Twin Coyotes winemaker is Signe Zoller, one of the pioneering women in winemaking. “Signe still climbs up on the barrels in the winery and drives the forklift,” Thompson said, “she is remarkable.” Zoller is an award winning winemaker who has worked in most of the California wine regions as well as in Australia. She has won Best of Show at the California State Fair, and the Long Beach and Monterey wine competitions. “We credit her with our win for Vermentino,” Thompson said, “as she helped craft that grape into the wine it is even though she had never worked with this grape before.”

Both Steve and Stu, who are identical twins, came into this industry after more than 24 years in two other careers. Stu was a Captain with the Upland Fire Department before retirement and Steve was a ship’s Captain affiliated with NOAA (National Oceanic and Atmospheric Administration).

“A week after we were born, the movie studios contacted our mother looking for twins to be in a major motion picture,” Thompson said. “We were stars in the movie “Strategic Air Command” and Jimmy Stewart played our dad.” Already famous at such a young age, they were sure to be a success at whatever they tackled.

In the tasting room the décor lends itself to a rustic theme which blends in with the other shops. Out back is a large deck with a bar table and stools. “During the summer months we pour out here,” Thompson said. On Saturdays they pour in the garden adjacent to the deck area. Then on the second Saturday on each of the summer months, they are joined by musicians while they pour in the garden. You can find them there sometime between one and five in the afternoon. The deck is handy for small parties and wine tour operators bring their clients out there. “We’ve done small bridal showers and parties,” Thompson commented, “and we have the availability for use of the garden.”

Inside, standing tall along the wall, is a female figure with grapes in her hair and two little twin coyote pups in her arms. She is one of the iconic scarecrows that were created by a local artist for the tasting room to put out during the annual Cambria Scarecrow Festival that runs through the month of October. Twin Coyotes is one of the wineries included on the Pacific Coast Wine Trail and they will take part in the Scarecrow Festival’s kickoff party on October 3rd.

On August 17th from 4:30 to 6:30pm, along with the other six wineries on the Pacific Coast Wine Trail, they will participate in a Garden Party at the Shops at the Garden Shed to benefit Project Surf Camp, a local charity that teaches surfing to disabled youngsters. This wine and cheese pairing will also feature live music and raffles. Tickets are $20 and are available online at Pacific Coast Wine Trail.com/tickets.

“We have two wine clubs,” Thompson said, “our regular Coyote Howler Wine Club, and a new one just starting that is just for twins.” Wine club members get a choice of reds or whites or mix of three bottles, two or four times a year, all at a 20% discount. “The twins club will probably get a special gift also,” Thompson said. Club membership also offers complimentary tasting for the member and three guests, discounts at special events and parties, and discounts at select local hotels.