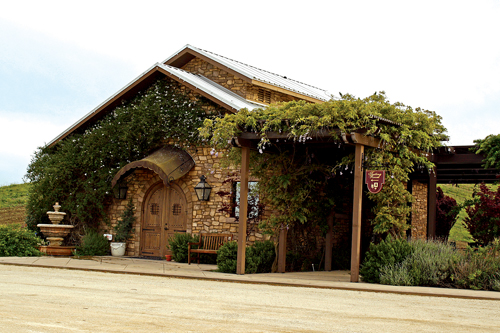 Shannon Patrick O’Neill has a secret. He never intended to be a winemaker. But hidden back in his ancestry is the seed of what would one day bring him to his life’s work.

O’Neill’s father was a physician in the Los Angeles area and he wanted his son to follow in his footsteps. “It wasn’t really something I wanted to do,” O’Neill says, as we sit inside his estate winery tasting room and sip some of his latest release Cabernet Sauvignon.
This room has high ceilings, a cozy fireplace, and a piano, racks loaded with wines, and a table and chairs for comfort. He tells me his story in his own inimitable way.

“Dad wanted me to be a doctor, but I couldn’t get into the colleges that would steer me in that direction,” he says. O’Neill’s sister suggested he try UC Davis and that is what he did. To make sure he got into some classes, he chose a new one being offered: Fermentation Science. “There were only 13 students enrolled,” he says.

O’Neill’s father had invested his money in some acreage in Creston. “It was a barley field,” O’Neill says. His father’s intention was to sell it at some point to make a profit, but O’Neill ultimately had some other ideas.

During college summers, O’Neill worked at a Belgian restaurant in Santa Monica that his father also owned. The chef was French and a lot of the patrons and the help spoke French. “I didn’t speak French and that bugged the chef,” he says. But O’Neill was successful, getting good tips, and developing a real rapport with his customers. At the same time, his sister suggested he learn about wines so that he could suggest the best ones for diners to enjoy. “That was the beginning of my wine education,” he says.

At the same time he was studying fermentation science, his sister was studying viticulture. A research program at Davis had 20,000 Chardonnay vines that they were no longer going to use. O’Neill and his sister took the plantings and put them in at the barley field in Creston. Fortunately Dad had improved the property some with a well so water was available. Even though Chardonnay is not the best crop for hot and dry Creston, O’Neill had the luck of the Irish with him and 85% of the crop was good. “The vines were two years old when I got them, “ he says, “and it took only two more years for them to mature and produce good grapes.”

By this time the die was cast. Shannon Patrick O’Neill was not going to be a doctor. A winemaker had been born. But for many years the crops grown were only sold to other wineries in and around Paso Robles, such as Fetzer and Kendall Jackson. Money made on the sale of that first crop was put back into the business which grew and grew.

Chardonnay was the first vintage he made for himself. “I still have every vintage I made from 1984 on,” O’Neill comments. In 1999 he opened the winery. By now he had married his wife Maureen whose maiden name was Maloy, thus the first name of the winery.

Jump ahead to 2012 and the winery and vineyard are thriving. O’Neill has added the Maloy O’Neill vineyard to the business located on Union Road where the grapes grow on the hillside in front of the stone tasting room. He takes advantage of the differing soil types between the two vineyards and the individual micro-climates. O’Neill’s wines are truly handcrafted in every sense of the word. He maintains a nursery where he has approximately 50,000 young vines starting at any given time and these plantings are his backup in case of a vineyard wipe-out due to frost or other catastrophes. Work in the vineyard is hand done, and at time of harvest the grapes are hand-picked.  “That’s when all the relatives come out and help out,” he says. This is definitely a family affair. O’Neill uses gravity feed, no pumps; hand punches down the brew in smaller tanks, and even does his own hand bottling. All of this produces some big, bold red wines. “I’m a caveman style winemaker,” O’Neill says with a laugh.

Maloy O’Neill makes 36 different wines in 200 case lots. “You can’t make French wines in Paso Robles,” O’Neill says when explaining that his wines have a higher alcohol content than wines that would be made to traditionally pair with food. There is Zinfandel, Cabernet Sauvignon (sometimes more than one, and each a little different), Petite Sirah, Merlot, a big inky black Syrah, Malbec, Chardonnay, Sauvignon Blanc, and Cal-Ital and Bordeaux blends. These wines have to be tasted to experience how wines from grapes grown in different sections of two vineyards have differing characteristics.

The setting of the tasting room high on the hill affords a great place for a special event or wedding and the O’Neills host many. There is a wine club, the MOV Cellar Club, where members receive three, six or 12 bottles quarterly and other discount benefits. They also offer Wine Education Seminars, Corporate Training and Team Building, and Tours.

“You know my name is Shannon Patrick O’Neill,” he says with a twinkle in his eye, “Irish. But the Irish were never known for being good winemakers. My mother was Italian.” And therein lays his secret – his Italian grandfather used to make wine. It’s not so much he’s a caveman that explain why his wines are bold, it’s because he’s Italian!