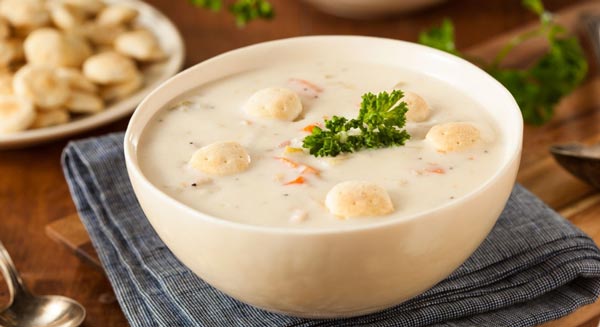 –The Morro Bay Harbor Festival in conjunction with the Rotary Club of Morro Bay are pleased to present a kick-off to the this year’s Harbor Festival with a “blind-taste” Clam Chowder Cook-off on Saturday, June 3. It will take place at the Morro Bay Community Center, 1001 Kennedy Way from 4–7 p.m. Four celebrity judges will taste the chowder along with the public to help decide the winner.

Clam chowder entries will be prepared by numerous Morro Bay Restaurants. The Clam Chowder Cook-off winner will get “bragging rights” as well as a free booth at the 36th Annual Morro Bay Harbor Festival on October 7th where they can sell their winning clam chowder.

The fifth and possibly deciding vote who will win will be the public who attend and partipate in the tasting. This cook-off will be a “blind taste” test in that the judges and public will not know which restaurants submitted the chowder entries.

Only two Morro Bay Harbor Festival Committee members will know who entered the contest and will be sworn to secrecy. Even the restaurants will not know which chowder is theirs once it’s submitted for tasting.

Tickets for the Clam Chowder Cook-off contest which includes a delicious seafood salad with fresh baked bread are $20 each. No-host cocktails and beverages will be sold by the Rotary Club. Only 250 tickets will be available, so get your tickets early! Tickets can be purchased by contacting the Morro Bay Harbor Festival office by calling (805) 772-1155 or by email at info.mbhf@gmail.com. Some Morro Bay Rotarians will also sell tickets. If not sold out in advance, there may be some tickets available at the door.

Remember to Save the Date – Saturday evening, June 3rd. Come taste with your local clam chowder fans and help decide which restaurant makes the best at the Morro Bay Clam Chowder Contest.

About the Morro Bay Harbor Festival