There is always a reason to celebrate at Rava Wines 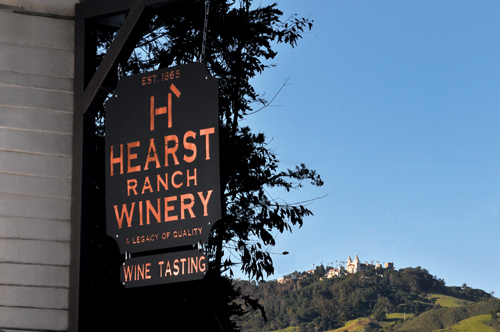 Five years ago, when Jim Saunders unwittingly won a day-long tour at Hearst Ranch at auction, he might have feared that he’d overbid. In fact, his wife said she was going to kill him for it, at the time. But his winning, if hefty, bid turned out to be one of the most serendipitous investments the sixth-generation San Luis Obispo County native has made in his long and successful career as both a general contractor and winemaker.

As Saunders tells it, he was invited (read: dragged) to a Hearst Cancer Research Center fundraiser by a tenant of one of his properties. When the private Hearst Ranch tour came up for bid, Saunders played along, but soon dropped out as the bids escalated. “I started taking a deep breath, and said ‘Gosh, that’s great I’m out,’” he recalls. But when the bidding stalled short of reaching Steve Hearst’s aim of $52,000, Hearst spontaneously said he would offer three tours to the three highest bidders. “So, I got stuck with a tour!” Saunders says with a hearty chuckle. “I thought, ‘Oh well, what the heck, it’s all for a good cause.”

He didn’t know just how fortuitous his win was until months later when he and his family attended the tour and had an amazing day seeing the vast ranch and castle with the down-to-earth, cowboy-hat-clad Hearst. Before leaving, Saunders gave Hearst a token of his appreciation for the tour: a couple of nine-liter magnums of his Saunders Ranch wine, in etched bottles showing the iconic “H” of the Hearst brand on the front, with the inscription “Special Reserve, made for Steven T. Hearst and his family. With special thanks from Jim and Debi Saunders for allowing us to spend a day we’ll never forget at Hearst Ranch.”

Saunders remembers that Hearst was taken aback by the gesture. “He called me two days later and said, ‘I’ve never been given a gift like this. This is really something. What’s your label?’” Saunders explained that he made wine for other wineries and had stayed out of the commercial side of things. “So, [Hearst] said, ‘Well, what would you think of putting a Hearst brand on a label? Do you think it would work?’ and I said, ‘Uh, yeah, absolutely that would work.’” With that, Hearst made plans to visit and tour the Saunders Vineyard.

Little did Hearst know that, with that casual conversation, he had just placed a winning bid to start his namesake winery.

Saunders explains with a bit of a mischievous laugh that before Hearst arrived, he designed a label with the same “H” in it and etched four-by-four foot piece of plasma cut steel to read “Hearst Ranch Winery, established 1865, A Legacy of Quality,” which he posted on his wine processing building. As Saunders drove Hearst from the vineyards toward the winery, Hearst said, “Hey, hey, wait a minute! What’s that sign?” Saunders nonchalantly replied, “Oh, well, you said you were interested in doing a winery—so, we’re doing it!”

Saunders laughs at the story, explaining, “I just did it as a gag.” But Hearst, who had long harbored an interest in starting a small, local winery that he could play a meaningful role in, liked the idea, and, “Six months later, almost to the day, we had bottled our first varietal, had all our licensing in place, labels approved, and we were in business. The stars had lined up for us.”

What started with a bit of chance and happenstance has continued to be blessed with good fortune. The Hearst Ranch label now carries 13 impressively award-winning and widely distributed wines.

For a tasting room, time was on their side again. The historic Sebastian’s store in the old village of San Simeon—the longest continuously operated store in the county (established in 1852), located just across from Hearst Castle near the peaceful pier and harbor of W.R. Hearst Memorial State Beach—was sold to the Hearst family the same year that Saunders and Hearst shook hands on their wine venture.

Saunders says it was Hearst’s idea to put the tasting room at the one-time whaling station. “I was actually very nervous about it on the front end,” he admits. “There were many days when we opened up and there wasn’t a soul. But now it’s just crazy, very busy.” He explains that Sebastian’s is the most north-westerly tasting room in the county, and is located near the steady flow of traffic leading to Hearst Castle.

By the look of the rustic and rickety barn wood building, and by the approachable taste and affordable price of the wine, guests might not guess that Hearst Ranch recently won Winery of the Year in the Central Coast Wine Competition or Best Red Rhône at the San Francisco International Wine Competition. And they might not guess, if he were to walk in, that the laid-back man in blue jeans, cowboy boots and a cowboy hat behind the bar is the man behind a multi-billion dollar corporation, let alone the man behind the wine. They would probably just think that they’d been lucky enough to discover a little hidden, historic gem of the Central Coast, a delicious wine, and a friendly wine clerk with remarkably deep respect and appreciation for the surrounding acres of coastline.

And, well, they’d be right.