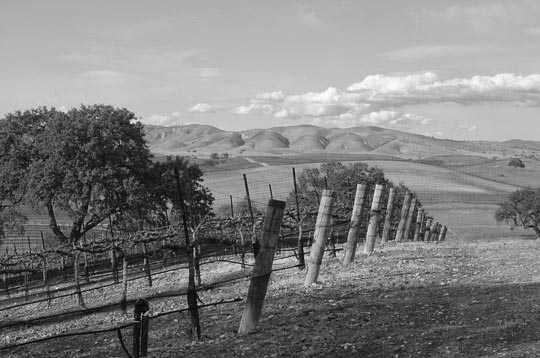 The vines at Hearst Ranch Winery.

Over the last 200-plus years, Paso Robles and North San Luis Obispo County have had a colorful history, ranging from almonds, to cowboys, to wine-growing friars to world famous composers. Take a “sip back and time” with a wine tasting trip that will be both educational, and likely to please the palate as well.

The history of wine in Paso Robles

The history of wine on the Central Coast goes back to the time of the Franciscan Friars who traveled through California establishing Missions. Plantings in North County began around 1790 at the Asistencia on the Santa Margarita Ranch. Vines are still growing adjacent to the existing Asistencia today.

The padres produced wine for their communion service and also made brandy, which they exported. Frenchman Pierre Hypolite Dallidet was first landowner to put in a vineyard and develop a commercial winery around 1853.

There is some debate as to which winey is the oldest in the Paso Robles appellation. Some historical writings say it was planted by Andrew York, a rancher from Indiana who planted a Zinfandel vineyard in the late 1870s, that eventually led him to establishing Ascension Winery, which later became York Mountain Winery. Locals will tell you that the original four wineries in Paso Robles were Rotta, York, Pesenti, and Martinelli. Only Rotta winery operates under the same name to this day. Pesenti winery has since become Turley Wine Cellars. 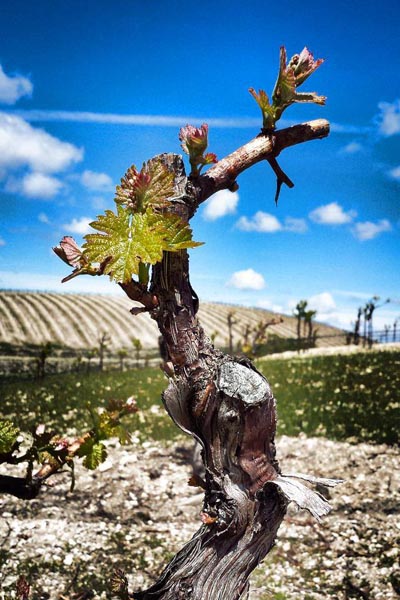 Rotta winery has been in operation since 1908

Rotta was purchased from Frenchman Adolph Siot, who planted the first grapes and produced the first wine in Templeton. The winery was owned by the Rotta family until being sold to Jason Shorrock two years ago. The 106-year-old winery is now producing bold, award winning wines with the new owner, and new winemaker, Jeff Branco. 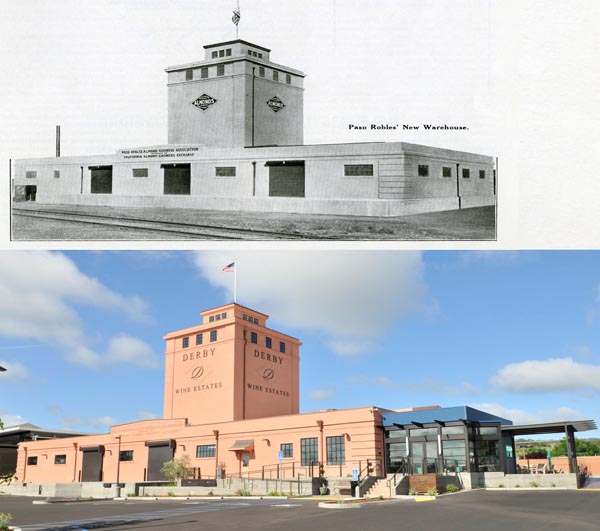 During the early part of the 1900’s, Paso Robles was known much more for its almonds than for it’s wine. It was nicknamed, “The almond capital of the world.” In downtown Paso Robles, the historic Almond Tower building, was originally constructed by the Paso Robles Almond Growers Association as a warehouse and processing plant. The original building was built in 1922.

After some decline in the local almond industry, K.B. Nelson, a representative of the Farmers Alliance Business Association, purchased the building in 1936. For 84 years the FABA owned and operated the grain brokerage out of the building, closing their doors in 1975.

The historic building remained empty for ten years, until 1985. In 1985 it became “Riverside Centre” and was home to various businesses. For a short time, the building was owned by Smart and Final, who wanted to demolish the tower, but, after locals bound together in protest and managed to get the building registered as a historical landmark, the demolition permits were pulled.

Ray and Pam Derby, who moved to the Central Coast in the early 1990’s with the intention of retiring, purchased the historic almond tower building that is home to Derby Wine Estates in 2010.

The Derbys took over this historic but derelict building after it stood vacant for 30 years, transformed it back to its original glory, and created a full production winery and tasting room. Today you can stop by to enjoy wine from three distinct micro-climates, as well as hear the stories and view pictures of the early construction of the tower. 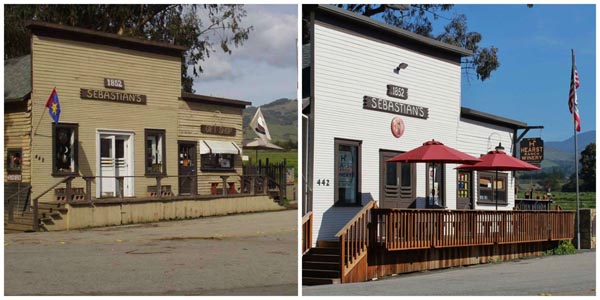 Before and after the remodel of Hearst Ranch’s San Simeon location in the historic Sebastian’s Store building.

Another historic locale is Hearst Ranch Winery’s San Simeon tasting room, which shares space with one of the county’s oldest post offices and Sebastian’s Deli. The building was constructed in 1852 and was originally located on the cliff, about halfway out to “The Point” in San Simeon Bay. It was re-located in the early 1860’s, with the help of horse drawn skids and lots of manual labor. Inside the building are antiques and vintage pictures of the area during the beginnings of the Hearst family ownership.

Hearst’s new Jack Ranch tasting room on Highway 46 East in Cholame also celebrates history. The James Dean Memorial is located on the site; a dedication and tribute to the young actor who passed away well before his time, close to the location of the tasting room.

The tasting room in Cholame is located within the Jack Ranch Cafe. Rumor has it that Jack Ranch Cafe was one of the “first ever” drive-thru food restaurants, where patrons would ride their horse up to the window to order and pick up their food as it was delivered down a wooden slide.