The name Hope Family Wines is appropriate for more reasons than one: this family-owned and run business is also a collection of distinct brands that make up a family of wines. The 5 labels, Liberty School, Candor, Treana, Austin Hope and Troublemaker, have evolved together under the care of the Hope Family over the past three decades.

The Hope family’s connection to Paso Robles was established in 1978 when they moved to the then little-known wine region from Bakersfield, CA and planted vineyards just east of the Salinas River. The Cabernet Sauvignon from these vines would eventually become slated each year for Liberty School, a winery owned as a second label to Caymus Vineyards in Napa. During this time both Chuck Hope and his son, Austin, became increasingly involved in the wine community growing up around them in Paso Robles.

Austin, who had been a part of his family’s grape-growing business since they first planted their vineyard, began to seriously study winemaking. Austin worked in Napa and traveled to the Rhône region of France to expand his knowledge about grapes and winemaking. After receiving a degree in Fruit Science from Cal Poly San Luis Obispo, Austin took on the role of Assistant Winemaker at Hope Farms in Paso Robles. It was under his influence that the Hope Family Vineyard was replanted to Rhône varietals. Austin’s own label, Austin Hope, which produces just under 2000 cases annually, focuses on producing high-end, hand-crafted wines from these vines.

In 1996 the Hope family purchased the Liberty School brand and moved production to Paso Robles. In the same year another member was added to the family of wines: Treana Winery. In 2000 the Hope family closed their tasting room in order to focus on growing their brands nationally. In the decades that followed the Hope Family Wines brands gained recognition on a local level as well as nation-wide. Locally, both Chuck and Austin Hope have been honored at the California Mid-State Fair, Chuck as Wine Industry Person of the Year in 2006, and Austin as Winemaker of the Year in 2009. 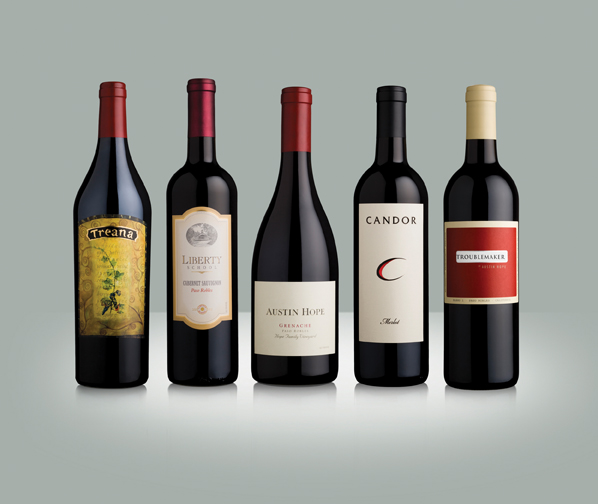 The Candor Wine brand was created during this time, producing multi-vintage wines from vineyards on the Central Coast, as was Troublemaker, a multi-vintage red Rhône blend. The Hope family’s connection to the Paso Robles wine community also deepened. In 2011 Austin became Vice Chair of the Paso Robles Wine Country Alliance Board of Directors, playing an integral role in an organization that his father helped to create in the early 1990s. Hope Family Wines Director of Communications, Joel Peterson, says of Hope Family Wines, “They are true ambassadors for Paso Robles–our wines are sold in all 50 states and almost 10 countries around the world. We know that as more Paso Robles brands become more known, it’s good for all Paso brands.”

Now, this dynamic group of wines is captained by Austin Hope. As President and Winemaker he has infused his own personality into the brands. The Candor wine labels now include QR codes, allowing the consumer to access short videos of Austin. These videos are a non-traditional way for the wine-drinker to learn more about the Hope family.

Jason Diefenderfer, who went to high school with Austin and has been part of the Hope Family Wines organization for nearly 15 years, makes the wine on a day-to-day basis and also oversees the winemaking team. Joel says that Austin and Jason have known each other for 20 years, and that they “play off each other’s palates when making blending choices.”

Joel says of Austin’s winemaking philosophy, “Multi-vintage winemaking is a philosophy that Austin is passionate about–both Candor and Troublemaker are multi-vintage wines that allow the wine to exhibit both youthful bright fruit flavors along with complexity and depth,” and that “The winemaking team strives to be varietally correct–making sure each wine really stays true to the grape varietal and not making ‘murky’ red wines with no definition.”

Also key to the Hope Family Wine business is sustainability, both in an environmental sense and in financial terms. Joel says of Hope Family Wines, “We also work with and purchase fruit from over 50 local families. That is very important to the Hope family— sustainable relationships that have lasted for decades.” The Hope Family Vineyard has received certification as a sustainable vineyard by the Central Coast Vineyard Team’s Sustainability in Practice (SIP) program.

In 2009 the Hope family opened a new tasting facility, which Joel describes as “a stunningly modern space inside a rustic barrel cellar” that “really focuses your senses on the surrounding vineyards and the wine.” The tasting cellar sits on the Hope Family Vineyard property on Paso Robles’ west side and offers visitors and locals alike the chance to taste wines and to get a view into this deep-rooted Paso Robles family-owned family of wines.

Each of the 5 brands of Hope Family Wines fills its own niche in the wine world. Created over the 3 decades during which the Hope family also grew and thrived in Paso Robles, this family of brands–Liberty School, Candor, Treana, Austin Hope and Troublemaker–makes up Hope Family Wines.