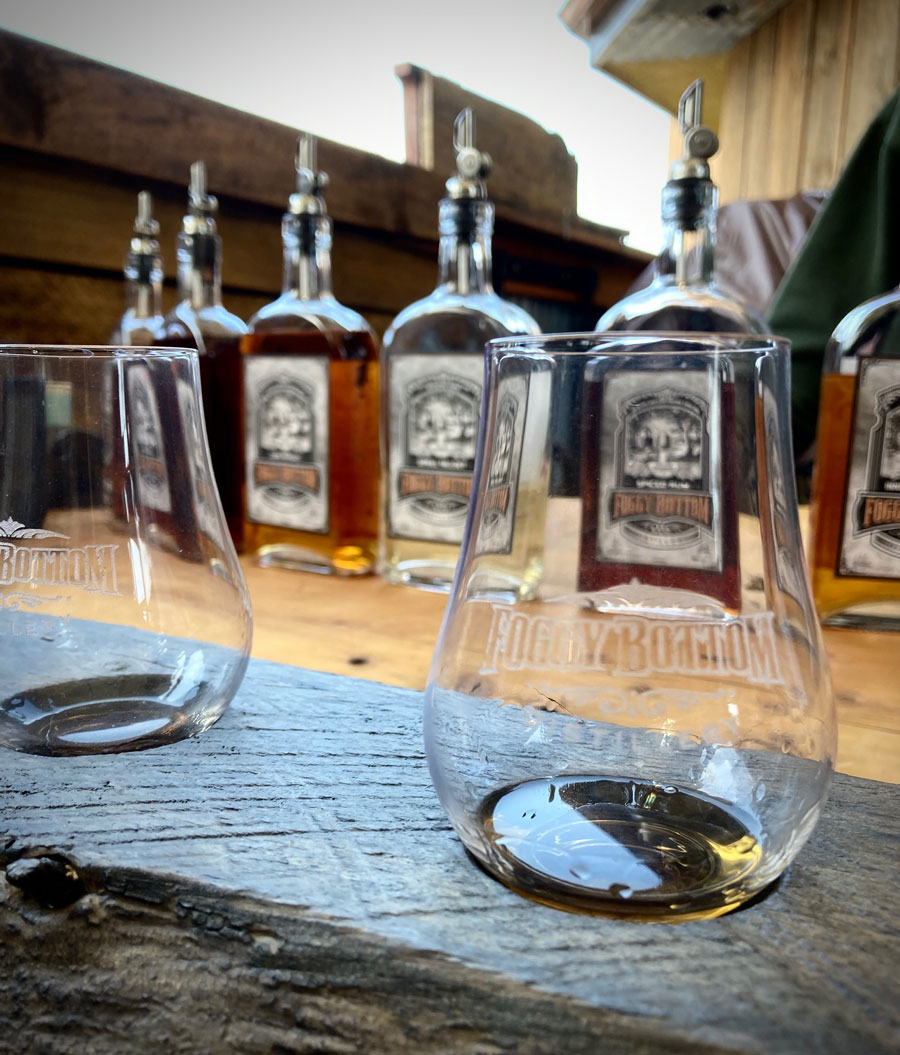 Adams says he enjoys creating new variations of spirits, “Distilling is a very good fit for my personality and lifestyle,” he says. “I enjoy using the tasting room as a social outlet. I am normally a very private person,” he says. “Plus I have a captive audience and they have to laugh at all my jokes and wild stories.”

Adams loves to give distillery tours to his patrons, who often will ask incredulously, “You make everything in here?” To which he will reply with, “Yes, all 35 plus spirits were made in here! That is when they are really blown away; seeing that the distillery is the size of a small walk-in closet.”

Finding a location for his distillery was no easy feat, according to Adams. He says that being a distillery was a deterrent for many leasing agents. Adams also works as a county building inspector and said that one day on the job he was inspecting the building that houses Martin’s restaurant for a remodel when he saw an unusual condition on the permit: that 100-square feet be dedicated to a craft distiller. After some convincing, and a whiskey tasting, the owners agreed to let Adams open his distillery in a small 100-square foot room. They would later alter the plans for the distillery to add a deck for the tasting room. Adams also has an off-site barrel room for aging.

Adams is a busy man; inspecting during the week and giving tastings every weekend. You may even find him running the still, which he says he did often up until the COVID-19 pandemic hit. During the pandemic, Adams joined several other local distillers in making an immediate pivot to producing hand sanitizer. Foggy bottom sold half of it and gave the other half away, “I just wanted to make my money back on it.” Adams said.

The future for Foggy

Adams has big plans for the future of Foggy Bottom. He says he plans on retiring from the county building department in about 4 years, after which he will be able to devote more time to growing the business. He says he can have three locations with his current license, and if he adds a restaurant he can have a full bar. “My little brother is working on having a location near his home in Roseville California,” he says. He has big plans for the restaurant, he says, “but I don’t want to give up those secrets yet.”

Foggy Bottom is open for tastings on Saturdays from 12 – 7 p.m. and Sundays from 12 p.m. – 6 p.m. ”If you come for a tasting, you will be entertained by my telling of the Foggy Bottom story,” says Adams. Drinks and entertainment? Sign me up!

Foggy Bottom is located at 905 Los Osos Valley Rd., Suite B, in Los Osos. For more information about their spirits and tasting room location, visit www.fbdistillery.com/ or call 805-795-1727.