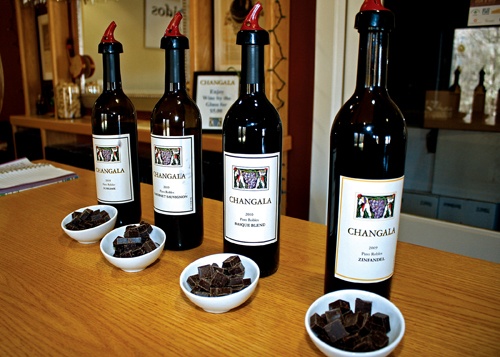 Changala Winery, owned and run by husband-and-wife team Jean and Heidi Changala, is the product of the Changalas’ love for their adopted hometown of Paso Robles.

In 1987 Jean and Heidi moved to Paso Robles from the Bay Area.  Both engineers by trade, they were excited to stretch their wings in the open space that the Central Coast had to offer, and to get back to Jean’s farming roots.

Jean grew up in a farming family and later attended school at Cal Poly in San Luis Obispo. It was natural that they would move to the Central Coast and try their hand at one of its famous crops: grapes.

They first planted 2 acres of vineyards around their home in Templeton, with the plan of selling the grapes to local wineries.  As they became more involved with the evolving wine industry in the area, both took jobs at wineries. Grape growing turned into winemaking as they began with small lots made at home.

Eventually, Jean and Heidi partnered with a few other families with similar interests and formed HMR Winery.  As their level of interest and activity surpassed what this label could offer them, they established their own brand in 1999, Changala Winery.

In 1999 they purchased 18 acres on Paso Robles’ west side where the current tasting room now stands. Before having a tasting room, the Changala’s went door to door in downtown Templeton asking small business owners if they would be interested in sharing their storefront with the new winery.

On the weekend of the 2008 Paso Robles Wine Festival they opened the doors to the Changala tasting room. The new space fit their needs and created a way for their customers to enjoy the property and get a sense of what goes into Changala wines.

Changala Winery celebrates its anniversary each year with a Basque-themed feast of lamb tacos, homemade salsas and fresh tortillas from nearby San Miguel.  They also hire a local band, the Wine Room Troubadours, to play music during the day.

This year they are hosting a winemaker dinner featuring Changala Wines and paella from the 10th Street Basque Café in San Miguel. The inspiration for the theme is from Jean’s Basque heritage.

They currently source their fruit from other local vineyards, and have developed long-term relationships with the other farmers.  Changala makes Grenache, Syrah, Cabernet Sauvignon, Petit Verdot, Petite Sirah and Malbec, as well as a number of red blends and a white Rhône blend.

During harvest season Heidi often gives visitors to the tasting room bags and invites them to help themselves to the fruit.  She says that an unexpected result of this is the bounty that has been given back to them. She has received preserves, applesauce and even a warm apple pie all made with the fruit given away from their orchards.

“It’s inspiring how collaborative all the Paso Robles wineries and farmers are” says Heidi, “The sense of community that exists in Paso Robles has been great.”  Which brings us back to Herrmann?s Chocolate Lab.

A few years ago Herrmann closed its doors to its Templeton location. The Changala’s approached the Hermann’s and asked if they would be interested in sharing a space on the Changala property. The renovations to bring the chocolate lab were complete in 2012 and once again, Herrmann’s Chocolate and Changala Wines are pairing once again.

Also keeping with the spirit of community, the Changala tasting room has opened its doors to Kaleidos Winery and now tasters can try wines from two wineries in one location.

Often, the busy tasting room is staffed by either or both of the Changalas, and the welcoming feeling that Jean and Heidi felt from the Paso Robles wine community shines through to visitors of this special place.