Sip back and enjoy heavenly wines at Seven Angels Cellars 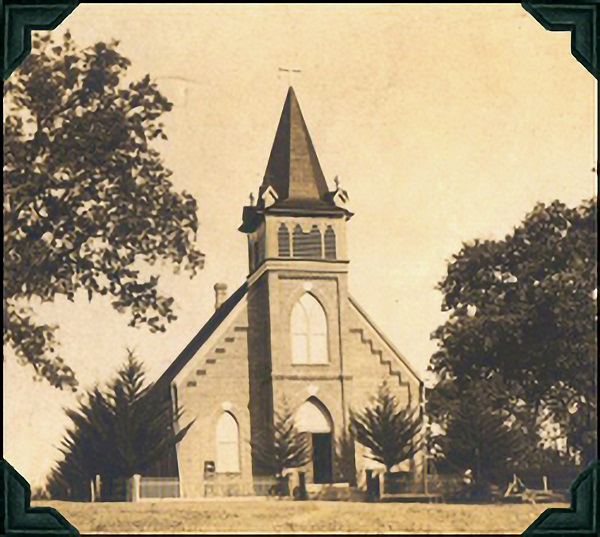 Bethel Lutheran Church in the 1800s.

–Templeton might seem like a quaint, sleepy village these days, but at one time, the town was a busy center for travelers and commerce. In the 1800s, the arrival of the railroad turned small towns into economic hubs and Templeton was no exception to that prosperity.

Spain and the mission padres were the first to introduce agriculture to California, displacing the original Salinan people in the process. When Spain was driven out the Mexican government sold or granted the Spanish ranchos to loyal friends and supporters. That’s how brothers Daniel and James Blackburn, along with Lazard Godchaux, came into possession of the land in 1857.

The founding of Templeton in 1886 coincided with the arrival of the Southern Pacific Railroad. Templeton was the last station headed south. Passengers traveling elsewhere boarded stagecoaches that took them to San Luis Obispo to catch another outbound stagecoach.

In 1889, Southern Pacific extended the railroad south to Santa Margarita and moved the railroad station. Templeton remained a shipping center for grain, wood, charcoal, fruit and cattle to be transported by train to markets across the nation.

Why the name ‘Templeton?’

Someone suggested naming the town “Crocker” after Charles F. Crocker, the Vice President of the Southern Pacific Railroad. Crocker chose the name “Templeton” after his two-year old son. Templeton, whose full name was Charles Templeton Crocker became quite well known.

In 1922, Templeton was responsible for establishing the California Historical Society as a permanent organization.  He also wrote the first American opera to be produced in Europe, “The Land of Happiness” or “Fey-Yen-Fah,” and is credited with popularizing Art Deco in America.

Crocker funded expeditions with academic institutions aboard his personal yacht, the Zaca. In 1930 he sailed around the world, memorializing the adventure in his book, “The Cruise of the Zaca.” He sold the Zaca to the United States Navy in 1940. The Zaca was later purchased by Errol Flynn, who released a documentary with the same title as Crocker’s book about a 1946 collection trip taken with his father, marine biologist Professor Theodore Flynn.

Templeton area history is researched and preserved by the Templeton Historical Museum Society. For more information about the museum and hours of operation visit templetonmuseum.com.